The story of the land surrounds Tony Stark (the alter ego of
Iron Man) who offered the land — one of his father’s former Stark Industries
complexes — to the Avengers as a place to train the next generation of superheroes.
The land will comprise several locations hosted by a different Avenger or their
ally.

The heart of the land will be Avengers Headquarters, where
guests will likely catch glimpses of the Avengers themselves.

Captain America, Black Panther and Black Widow will face
their respective foes in the building. Guests might also see Spider-Man
performing an aerial show outside, swinging down to meet guests. Guests can
also meet Iron Man, Captain Marvel, Ant-Man and The Wasp, Doctor Strange, the
Guardians of the Galaxy, Black Panther, and Thor.

Taskmaster, who has a role in the upcoming film “Black
Widow,” will appear for the first time in Avengers Campus.

Another of the land’s locations will be the Worldwide
Engineering Brigade, or WEB, where innovators assembled by Stark invent new
technologies to help everyday people become heroes.

The land also will feature Web Slingers: A Spider-Man
Adventure. Actor Tom Holland will portray Spider-Man encouraging guests to
capture out-of-control Spider-Bots. They will accomplish this through the use
of 3-D glasses and WEB’s latest invention, the Web Slinger vehicle, which lets
guests sling webs like Spider-Man.

Disney said the attraction will use a mix of physical sets
and virtual environments. There will be no height requirement.

The land also will incorporate the existing Guardians of the
Galaxy — Mission: Breakout!, which
opened in 2017 in the former home of the Twilight Zone Tower of Terror. 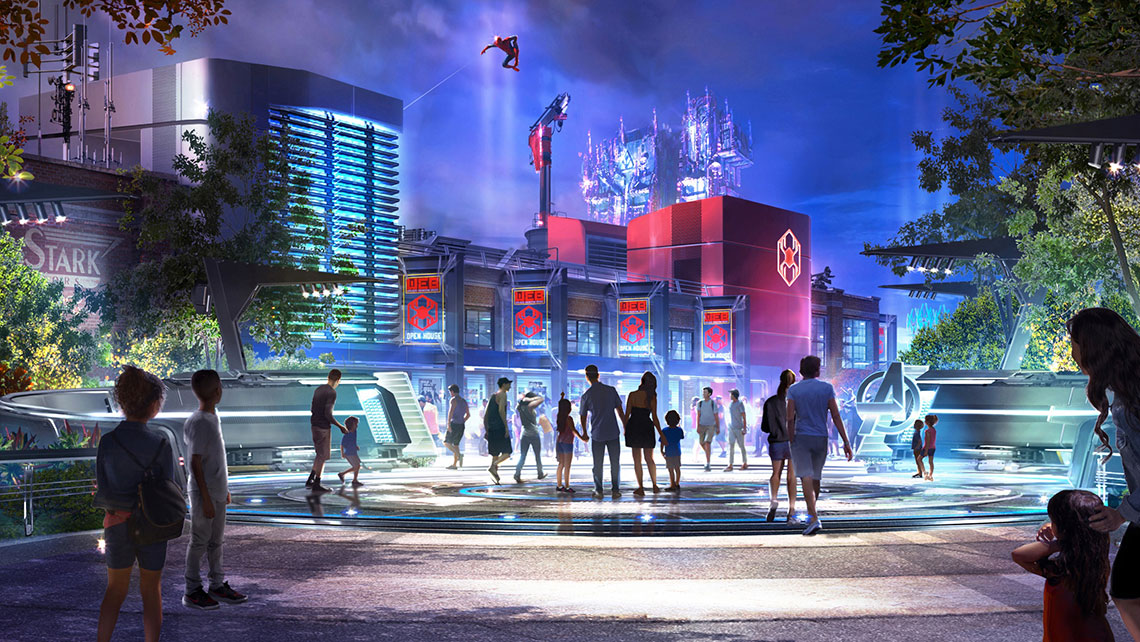 Elsewhere in Avengers Campus, guests will have a chance to
train with Black Panther and the Dora Milaje (Wakanda’s elite guards) as well
as encounter heroes and villains like Ant-Man and The Wasp and Doctor Strange.

They can learn mysterious secrets from Doctor Strange in the
Sanctum, which he will bring to life with his spells.

At Pym Test Kitchen, normal foods will be showcased at
unusual scales, Disney said. Guests will be able to watch Pym’s food scientists
at work in the kitchen lab. Food coming out of the lab on a conveyor belt will
undergo some surprises.

The eatery will feature dishes like plant-based
large and micro meatballs with pasta (accompanied by a super-sized spoon and
tiny fork), or the Pym-ini, a panini on toasted focaccia served by the slice or
as a long sandwich with multiple portions.

Adjacent will the Pym Tasting Lab, featuring craft beers
poured via a reverse draft system, meaning the glass will fill from the bottom
up. The location will also serve beer cocktails.

At Shawarma Place, which references the Avengers taking up
Stark on his offer to try food at the “shawarma joint” after the Battle of New
York, guests will enjoy shawarma-inspired snacks. The food cart will serve hand-held
wraps filled with chicken or falafel.

Terran Treats is another food cart featuring a “weird and wonderful”
menu curated by the collector, Taneleer Tivan, from Guardians of the Galaxy. It
will feature churro spirals and a “cosmic orb with an outer shell revealing a
decadent creamy filling,” Disney said.

The Web Suppliers store will feature themed merchandise,
including interactive Spider-Bots controllable by remote control. The bot can
be customized, and guests can purchase a backpack designed to carry and show
the Spider-Bot.