ABOARD THE STAR BREEZE — Cutting a ship in two and inserting a new section is the nautical equivalent of open-heart surgery: It’s never a small thing.

But such a major procedure hasn’t changed the look and feel of the Windstar Cruises ship Star Breeze all that much. It remains yachtlike, cozy, a comfortable and casual way to get around the ocean, even with an extra 85 feet of length to play with.

The biggest change is that the Star Breeze will have room for another 100 guests on full sailings, as the addition of 50 cabins takes capacity on the eight-deck, 12,995-gross-ton ship to 312.

This was the ship’s first since voyage since it was stretched at a Palermo, Italy, shipyard late last year and its first since the pandemic shutdown last spring. The weeklong June 19 cruise from St. Maarten carried only 55 paying guests, no doubt because of ongoing concerns about the pandemic and consequent safety hurdles and precautions.

The ship was abundantly spacious, notably at Windstar’s signature open-deck barbecue, which has a lot more room to play with than before.

In addition to the new cabins, the Star Breeze has doubled its number of dining venues. The ship used to have two, the Amphora fine dining restaurant and the Veranda buffet, which converts to Candles restaurant at night.

The stretching has made room for two more restaurants, concepts I’ve long wanted to see tried or expanded on ships. The first is the Star Grill by Steven Raichlen, an open-air venue on Deck 8 that adds more of the alfresco dining popular on many of Windstar’s tropical itineraries. The other is Cuadro 44, a Spanish tapas concept installed off the atrium stairwell on Deck 6.

The smaller Cuadro 44, developed by New York chef Anthony Sasso, was convivial and modern. Tapas-like starters included a savory jamon Iberico and rice balls influenced by paella. The main course of lamb chops was pleasantly charred, and it was impossible not to finish my dessert dish, an orangey crema Catalana. 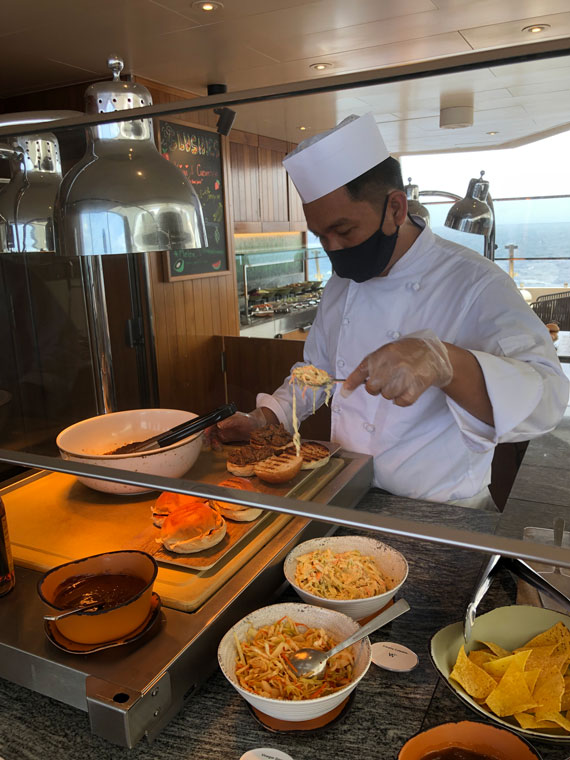 I was a bit disappointed that the Star Grill, bearing the name of the grilling guru Raichlen, doesn’t bring the sounds and scents of outdoor grilling to sea. Instead, the food is prepared in a small galley behind the serving area. But I had a smoked pork sandwich with mustard sauce and creamy coleslaw that hit the spot, and the rotisserie lemon chicken was tasty, too.

The Star Grill occupies an attractively designed, canopy-covered space opposite a slightly expanded Star Bar, which is the top-deck, semicircular watering hole that is so distinctive to this class of ship. Guests can sit at regular tables on the starboard side that offer a great view of the ocean, and there’s some lower, sofa-style seating on the port side. “Star Grill gives us an additional option for events and post-tour functions,” hotel general manager Milton Ceklic said.

Amphora, one of the existing restaurants, was moved to the newly inserted block and given a number of improvements. Its old space on Deck 3 has been given over to 10 new porthole suites.

Another notable change is the enclosure of the former lifeboat areas near the aft restaurant, giving Veranda two additional “wings” with 15 to 20 seats each. A new buffet area eases a bottleneck in Veranda, and a new coffee bar will add a second option to the coffee bar in the Yacht Club.

Gone are the casino and library (with a few computers and a printer having moved to the Yacht Club). In their place is a bigger Star Boutique with more branded merchandise.

The decor and layout of the suites added in the new block is very consistent with the original ship, with more modern cabinet hardware and a Venetian-glass mirror being the main differences. The new cabins also have beds by the windows and seating by the door instead of the reverse.

The tiny swimming pool on the Star Breeze is somewhat bigger now, with an attractive set of cascades fronting a plexiglass wall creating an infinity edge.

The Star Breeze is the first of three Windstar ships getting the stretch treatment, with the Star Pride and Star Legend to follow this year.