The attraction, the first to feature Mickey Mouse himself,
was dedicated Tuesday night and opened to the public on Wednesday, March 4. 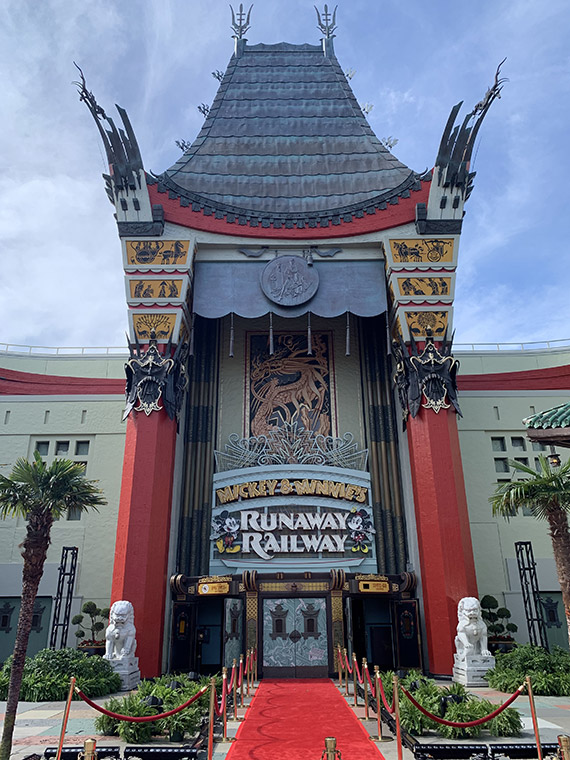 “This park has been completely transformed,” D’Amaro said, with
the Runaway Railway being the capstone in that transformation.

At the dedication ceremony for Mickey & Minnie’s Runaway
Railway, he highlighted the park’s shift from being about the making of movies
to transporting guests inside movies.

“This is a groundbreaking attraction that puts you into the
fun and unpredictable world of Mickey Mouse cartoon shorts,” D’Amaro said. “It’s
pretty wild, and we’re very proud of it.”

The attraction is located in the Chinese Theater, former
home to the Great Movie Ride.

Mickey & Minnie’s Runaway Railway begins with a preshow,
debuting a new cartoon short, “Perfect Picnic.” Mickey and Minnie (and a
stowaway, Pluto) are on their way to a picnic in Runnamuck Park, passing train
engineer Goofy in his locomotive on the way. The locomotive ends up getting
into some trouble, after which Goofy invites viewers into the cartoon for a
ride on his train.

Riders board one of four ride vehicles following behind
Goofy’s locomotive (he appears inside via a screen) for a tour of Runnamuck
Park. After the train accidentally hits a track splitter, Goofy and his
passengers are separated.

Riders are then sent through some madcap adventures — from
a carnival to getting thrown over a waterfall — on trackless ride vehicles.

The trackless vehicles move autonomously from each other,
whisking riders around large scenes and providing delights a system on a track
couldn’t (for instance, waltzing into and conga-ing out of a dance class with
Daisy Duck in a choreographed routine).

“Mickey and Minnie definitely live in such a unique 2D
world,” Walt Disney Imagineering’s Audrey Hauser, a control software developer
on the attraction, said in an interview. “Bringing that 2D environment into a
3D space that our guests are really able to walk into and interact with was
definitely a technological challenge.”

That walk into the cartoon begins right after the preshow
video, in which the screen “explodes,” creating an opening to the ride loading
system. 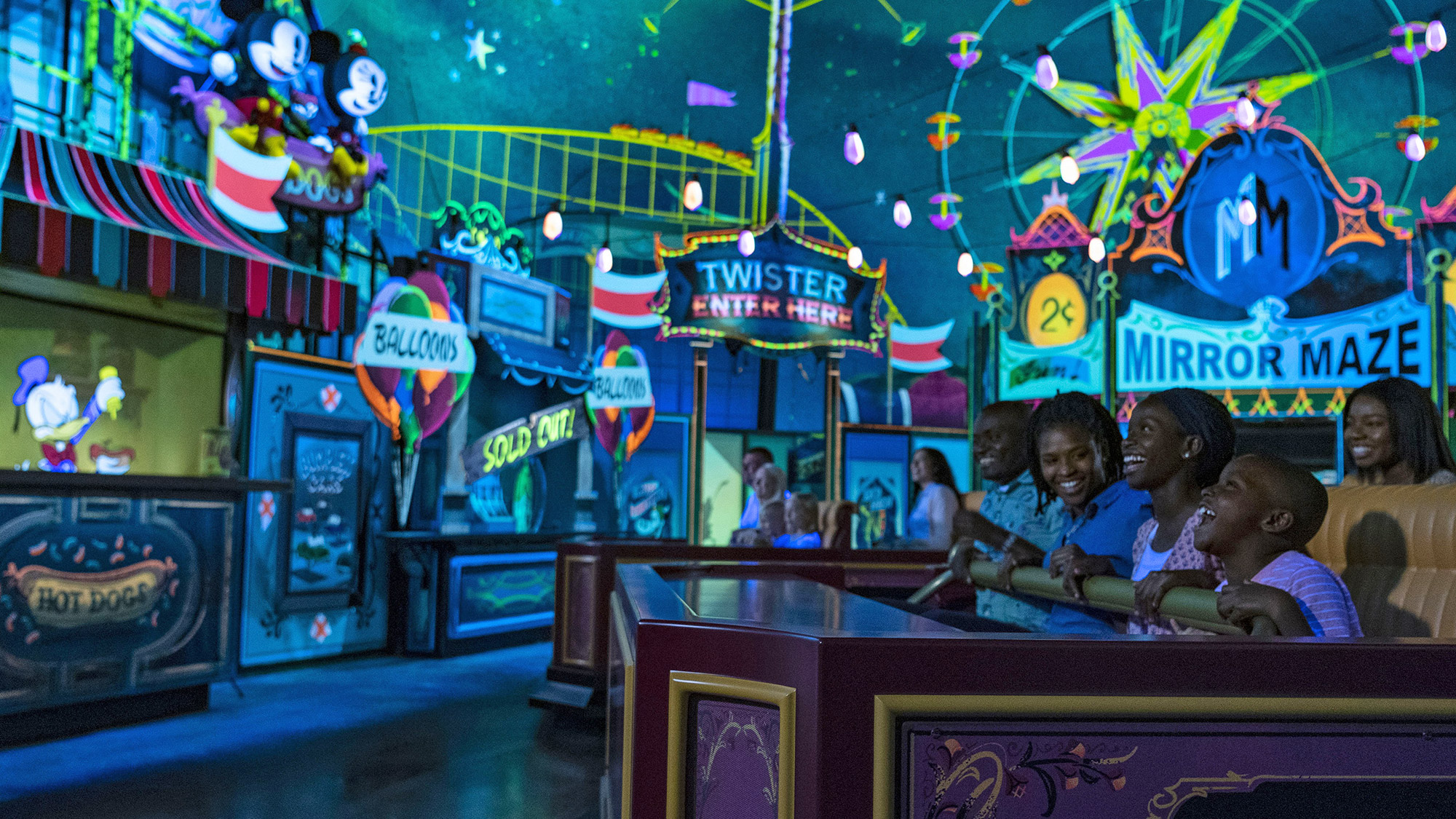 Throughout the attraction, the ride utilizes a number of
technologies to immerse riders into a world that is three dimensional without
forgetting its 2D roots.

“We took a bunch of different technologies, from projection mapping
to practical effects, and even audio-animatronic figures,” Hauser said. “It’s
really the integration of all of those different pieces of technology that
brought us this wonder 2D, but 3D, world that guests are able to walk into that
really holds true to the 2D look of Mickey Mouse’s cartoon universe.”

The attraction itself is an original, as is its music and
theme song, “Nothing Can Stop Us Now,” is an earworm to rival “It’s a Small
World (After All).”

The music was composed by husband-and-wife team Christopher
and Elyse Willis, who also compose the music for Disney’s current Mickey Mouse
cartoon shorts (the attraction’s characters are stylized in the same modern way
as the current shorts).

“In the tradition of attractions with original stories and
original theme songs like Pirates of the Caribbean, Haunted Mansion, It’s a
Small World  —  Chris had to really rise to that occasion,
because people love that,” Walt Disney Imagineering executive creative director
Kevin Rafferty said in an interview. “And he did. He did it and he exceeded
that, all of that.”

Christopher Willis said he is a big fan of some of Disney’s
legendary songwriters, like the Sherman brothers Robert and Richard and Oliver
Wallace. Composing the music for Mickey Mouse’s first attraction brought a
certain responsibility with it, he said, but it was also fun to inhabit that
world of Disney songwriters.

“You’re the next one, as far as I’m concerned,” Rafferty
told him. “You are in their company now.”

In the animated short, Mickey, Minnie and Pluto are getting
ready to head out on a vacation, prompting Mickey to ruminate on previous
travels documented in existing Mickey shorts like Croissant de Triomphe.

A RIDE ON THE RAILWAY

Members of the media were given a chance to ride Mickey
& Minnie’s Runaway Railway in advance of its public opening on Tuesday.

The attraction had some big shoes to fill, but Runaway
Railway is so far advanced technologically from the relatively simple dark ride
(albeit, with cast member interaction) that was the Great Movie Ride. 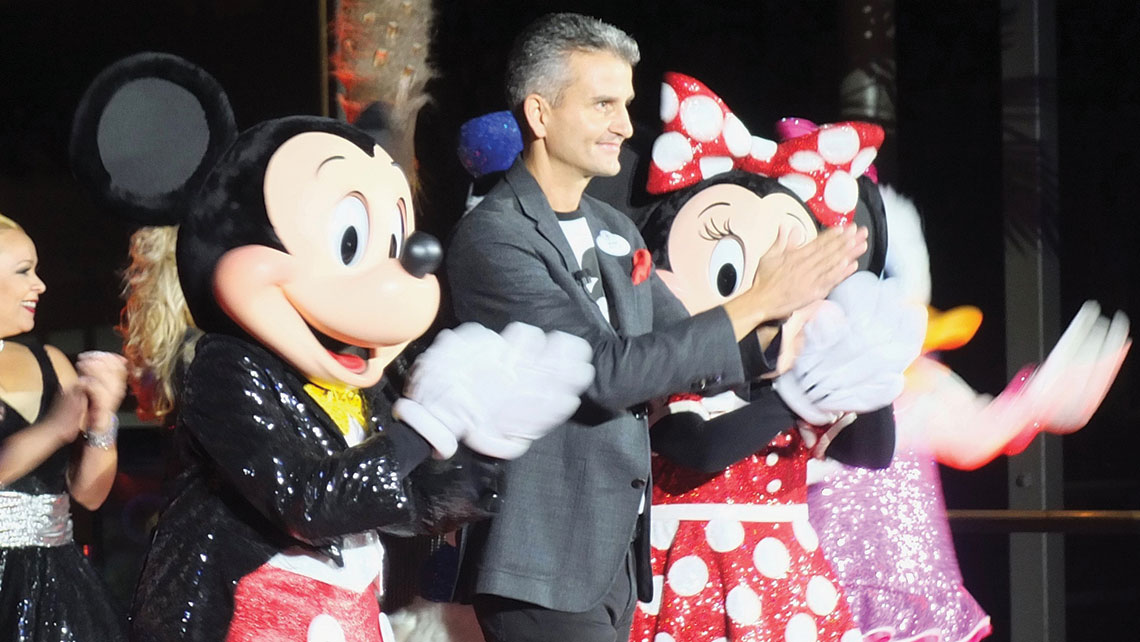 Imagineers used multiple layers of brightly painted sets,
projections and video screens to create what can best be described as a
three-dimensional version of a two-dimensional world, exactly what they were
going for.

Each of the four train cars following Goofy’s locomotive
offer riders a different perspective. I rode in each and saw different things
on the attraction each time.

It was fun to see major characters — Mickey, Minnie, Pluto,
Goofy, Donald and Daisy — in an attraction for the first time. I also
immediately fell in love with Chuuby, a bird who enjoys singing and dancing in
Runnamuck Park. Chuuby is a minor character, but an adorable one with personality.

The popularity of the characters, combined with the
attraction’s next-level technology and catchy tunes, will resonate with guests
young and old.

There are some surprises along the way. I won’t spoil it, but
wait for the moment when Goofy asks what a certain lever does just before
disembarking the attraction — I jumped every time.