It’s not often I leave an event feeling excited and empowered about being a woman in travel, but after yesterday’s incredible luncheon hosted by The Travel Corporation, I felt just that.

This year and for the first time ever, in celebration of International Women’s Week, The Travel Corporation assembled a panel of female trailblazers to share stories and talk about how they are helping to create an equal world for women in a male-dominated industry.

Prior to the luncheon, I had a chance to interview two of the aforementioned trailblazers to learn, not only how women have transformed the industry, but also how their approach to travel has helped change the ethos of what travel can mean to women in 2020. One such trailblazer was Travel YouTuber and Honorary Contiki Ambassador, Nadine Sykora.

“The industry is already changing. All you have to do is look at where we’ve come from to see how quickly it’s changed. There are lots of examples like Saudi Arabia that has recently opened its doors and with women now being able to drive themselves and travel by themselves. The more women travel, the more local women see other women doing these things and it inspires them to do the same. I have seen that change – women start to realize that it’s totally okay to travel without your husband or alone, there is nothing wrong with that. Seeing other women do these things sparks the idea of what is actually possible when you may have previously not known it was.”

National Geographic Wildlife photographer and TreadRight Wildlife Ambassador Ami Vitale was another trailblazer who I had the chance to interview at yesterday’s luncheon. Vitale originally got her start as a conflict photographer covering the horrors happening in Afghanistan, Angola, Kashmir and Kosovo. It was during her time on the ground that she discovered through local women telling their stories how we are all interconnected, not just women to women or as humans, but to the world and wildlife as a whole.

“There were not very many women at the time when I started… but I knew instantly that we told different kinds of stories as women. We were looking for the other side of the story, behind the front lines. Stories of not just the violence and horrors but the humanity caught in the middle of all this,” explained Vitale. “10 years into it I realized I am missing the biggest pieces to the story and that is the natural world and what we are doing to this planet because actually so many of our conflicts are about resources. And all my stories are not just about wildlife, they are about people too and about our connection. They are to remind us that we are connected to nature and everything that we do impacts the world.”

The power of social media has also made a huge impact on what is possible for women interested in having a solo travel experience. Prior to social media, it was more challenging for women to find tailored information that directly appeals to female interest and concerns such as safety, and as solo travel adventures for women become more popular it is only natural for women to turn to others as guides.

“I think women are especially more inclined to trust another women’s opinions regarding experiences within a certain destination,” shared Sykora. “For example, I have a bunch of guy friends who will showcase a destination but as a woman, that isn’t necessarily the same experience I am going to have. When you see another women do it, it’s a lot easier to trust that opinion and see yourself following in those footsteps.” 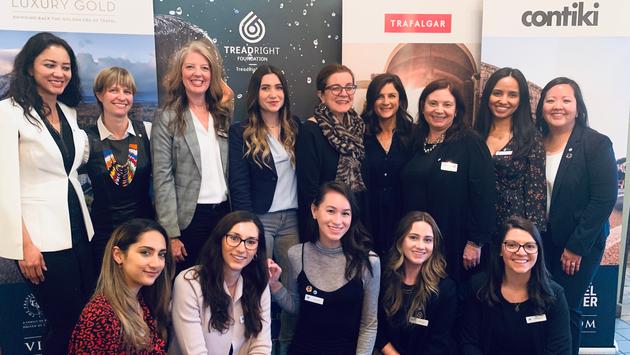 The Travel Corporation doesn’t just talk the talk when it comes to creating equality for women, they also walk the walk. Currently, 71% of their Toronto office is made up of women and over half of TTC’s leadership positions globally are held by women. One could say they should be considered a trailblazer in the travel industry themselves.

“I see TTC’s many female leaders as a key to our ongoing success, precisely because of the passion we bring to our work. I recognize my own passion reflected in kindred spirits such as Ulla Hefel Bohler, CEO of Insight Vacations and Luxury Gold, and Ellen Bettridge, CEO of Uniworld and U River Cruises, with whom I have worked closely with over the years, developing the world’s finest river cruise line. Other impassioned kindred spirits include fellow ex-South African Lucille Sive who runs our North American-based African safari companies Lion World and African Travel, and Melissa da Silva who leads Trafalgar, Costsaver and Brendan Vacations in the US, whom I have seen grow and mature with TTC over the past several years.” Shared Bea Tollman, Co-Founder of The Travel Corporation in a recent press release.

In a world where people are often too focused on what sets one person apart from another, travel builds bridges and empowering women is just one way The Travel Corporation is helping to create equality within the travel industry. To learn more about The Travel Corporation and all of their 42 award-winning brands visit TTC.com