On our first night in Vilnius, Lithuania’s capital, the hip, young waiter at the trendy Mykolo restaurant served us a cheese plate with pride. He pointed out the varieties — cow, goat and sheep — “just like in France,” he said, adding, “Five years ago, we didn’t have cheese.”

What he meant by this astonishing declaration, we later learned, was that Lithuania has, of course, always had cheese, but almost exclusively just one kind, a soft farmer’s cheese similar to ricotta.

Surprisingly, the topic came up several times during our stay, with hoteliers and restaurateurs explaining that the issue was never about dairy — Lithuania has wonderful, grass-fed dairy in abundance — but simply a question of culinary tradition and know-how.

To me, this transition from communist-era austerity to Western European abundance is a metaphor for the country’s emergence onto the international tourism stage, a transition we’ve seen play out in other countries across Eastern Europe, including Croatia, Slovenia and, more recently, Estonia.

Of course, there are many reasons to explore Vilnius besides the hunt for a great meal, but I would argue that being able to offer high-quality restaurants, along with respectable wine, artisanal cafes and appealing hotels, is right up there with architecture, art and history when trying to compete for today’s international visitors.

With all this in mind, we began our stay at the Vilnia Hotel in Old Town, a 79-room, four-star boutique hotel located in a recently refurbished, 19th-century building, whose interior has been revamped with a contemporary style, modern amenities and robust WiFi.

The location, a few minutes’ walk from Cathedral Square, was a convenient starting point for our guided walking tour. You need at least a few days to see even just the highlights in the city, but top attractions include Cathedral Basilica, the view from St. John’s Bell Tower, the former Jewish quarter, Town Hall and Literatai Street. My favorite site was Gediminas Castle Tower, which you can access via funicular or on foot and which features an evocative interactive exhibition called “Timeline Views From the Windows of the Gediminas Castle” that showcases the city’s history via images displayed through tower windows. 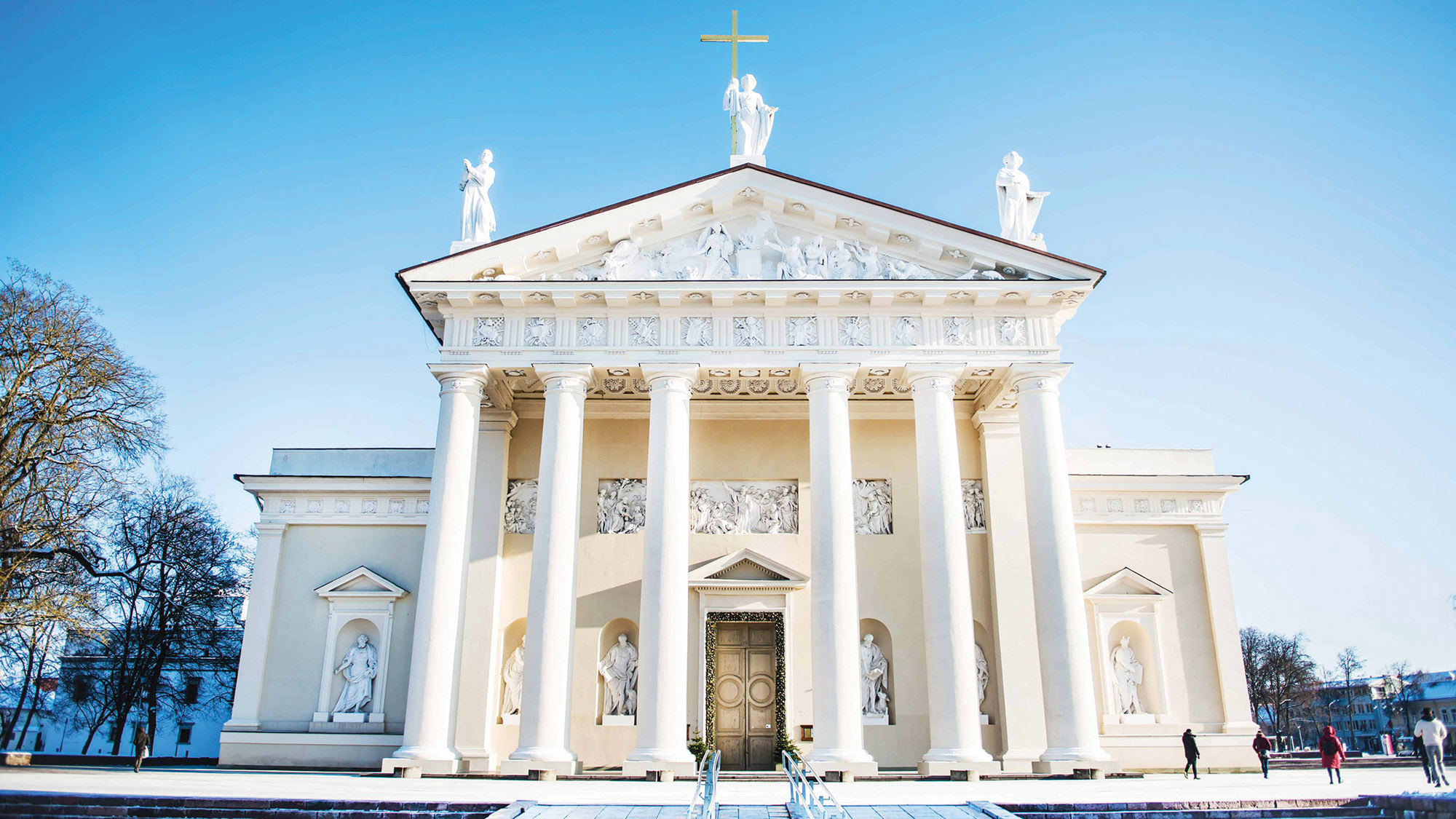 We also made time for a Hales Market “gastro experience” where we saw firsthand the traditional soft cheese of old along with sausages, fermented vegetables and other regional specialties, followed by a carnivorous lunch at the Hales Deli.

Another popular attraction is the Amber Gallery in the Old Town, which functions as a museum and a retail outlet for amber, one of Lithuania’s key souvenir products.

At night, we met friends for drinks and appetizers at Saint Germain, a French restaurant on Literatai Street, then moved on to Queensberry restaurant, another hip eatery known for serving updated versions of traditional fare, like potato dumplings and sausages, along with more international options, such as duck confit and eel.

The restaurant’s other claim to fame is its wine menu of more than 50 Lithuanian wines, although be forewarned that the varietals are almost all made from fruits other than grapes.

For a completely different take on the city, we moved to the Grand Hotel Kempinski Vilnius, where I gave myself up to a two-hour Vilnius Extravaganza treatment at the Kempinski Spa. The treatment combines a hot stone massage, grape scrub, facial and scalp massage, or you can try the Total Amber Experience, which incorporates both crushed amber and amber oils in a massage.

The property is proud of its wine cellar and of its award-winning sommelier, Martynas Pravilonis, who we met during a wine tasting at Kempinski Atelier Wine Boutique and Tasting Bar just off the lobby. Guests and nonguests can book a tasting, and prices are based on the number and types of wines participants try.

It’s worth noting that, with the exception of a sweet dessert and fruit wines, none of the wines we were served here and throughout Lithuania were local, and restaurateurs we spoke with were frank that, while good wines are widely available, they are likely to hail from elsewhere.

As a counterpoint to the historical Old Town, we spent an afternoon touring Vilnius’ Open Gallery, a fascinating outdoor art installation in Naujamiestis, a gritty industrial area full of abandoned Stalinesque warehouses. The exhibition, which features edgy, curated works by international artists, mostly painted on the exteriors of factory buildings, is free to the public.

For lunch, we had one of our most traditional Lithuanian meals yet, of dumplings with various fillings, soup and a local mead drink called midus at Trobele restaurant, a picturesque eatery with a flower-filled patio that seemed to be popular with locals and visitors alike.

By contrast, dinner was at Dziaugsmas, a tricky-to-find restaurant that was recently rated the city’s top eatery by the Good Food Academy, the Lithuanian Association of Hotels and Restaurants, the Association of Lithuanian Restaurant Chefs and Confectioners and the state Department of Tourism.

Here, chef Martynas Praskevicius offers high-end, deconstructed takes on such regional specialties as cod fritters and beef ribs, and about 70% of the products are locally sourced.

To get a sense of attractions outside the city, we traveled about an hour to Trakai, a resort lake town that was the capital of the Grand Duchy of Lithuania in medieval times.

We hopped aboard the Solliner vessel for a boat ride to the 14th-century Trakai Castle, which sits alone on an island. The castle held strategic importance back in the day and nowadays serves as an important tourist attraction.

Trakai is also known as the home of the Karaim sect, originally from Turkey, who have lived in Lithuania since the 14th century. We stopped for a traditional Karaite lunch at the Kybynlar restaurant, adjacent to the many pastel-colored cottages that line the street and across from the Karaim Temple. The owner, a member of the Karaim community, walked us through the local history and explained the dishes we were eating, the most popular of which is the kybyn, pastry dumplings filled with various meats or vegetables. The Karaim don’t drink alcohol, but wine and beer are available for guests.

Our next stop was the five-star IDW Esperanza Resort and Spa nearby, a sprawling lakeside retreat that manages to combine rustic and posh sensibilities harmoniously. The 32-room property is spread out over 35 acres within Aukstadvaris Regional Park and offers three restaurants helmed by executive chef Dmitrij Berman: La Esperanza, where we had a standout dinner that could have held its own in any A-list European city; La Terraza, an indoor/outdoor eatery for breakfast; and La Costa, a seasonal grill restaurant overlooking the lake. The property also features a robust wine cellar, a private beach, tennis courts, a spa and a heliport.

Bike tours in the countryside and in Vilnius also are widely available, and had the weather cooperated, we would also have been able to take a hot air balloon ride. There are a number of companies that offer the experience, including the Audenis balloon club.