The projects “have taken a front seat,” Boschulte said and will enhance access to the city’s scenic waterfront while also improving walkways that link the historic city’s attractions and shopping streets to its cruise-ship port, one of the Caribbean’s most-visited.

“The main street in [Charlotte Amalie] St. Thomas, which is a major shopping locale, is about 90 percent complete,” Boschulte said. “It has a wonderful look and feel and just re-opened the week before Christmas.” Meanwhile the waterfront project “is about 70 percent complete,” he said. 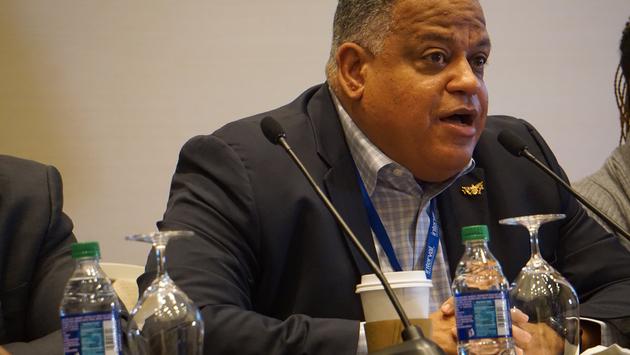 The completed project will add two additional [vehicular] lanes and “walkways from the major cruise ship dock in Havensight to downtown, with wonderful vista along the way, so I’m very pleased,” said Boschulte.

“This is major for us,” he explained. “The one major negative we’ve had over the years is traffic, especially with cruise passengers wanting to get back to [their] ship.” Boschulte joked, “This is one of the few projects in my life in the U.S. Virgin Islands that is ahead of schedule and under budget. It’s moving along really well.”

Charlotte Amalie is filled with landmarks tied to its celebrated past, first as a 15th and 16th-century pirate haven, and later as a commercial Danish outpost. The city retains several well-preserved examples of period architecture including the St. Thomas Synagogue, the Western Hemisphere’s second-oldest.

The home and birthplace of St. Thomas native Camille Pissarro, the father of the French Impressionist painting, is located at 14 Dronningens Gade. The home and studio is open to visitors and features contemporary artwork by local artists.

In addition to the Charlotte Amalie waterfront project, numerous street signs in Charlotte Amalie and in Frederiksted on St. Croix are receiving official names, according to government officials quoted in local media reports. Street signs with the new names are expected to be installed throughout the territory by 2022.

The plan will formally provide names for public and private streets, including driveways serving residences and businesses, stair-streets, walkways and sidewalks. Many of the street names will reflect historic and/or cultural names while others will utilize ecological names including plants, birds and animals. Obscene names and names deemed derogatory to any race, creed, ethnic or religious group are prohibited.

As in many Caribbean cities, many streets across the U.S. Virgin Islands lack formal names and street signs. The Street Addressing Initiative will create a system “providing navigable streets based on national standards, record” and “document the information in a master repository and link the Virgin Islands with emergency systems and utilities,” according to Chris George, the program’s director.