When sailing to Stockholm on the Silja Serenade, it’s best to leave the stateroom curtains open at night. At first, the Baltic Sea resembles a painting by Rothko, but gradually a line of orange bisects the indigo sea and sky, and when you wake at dawn, you’re cruising amid the 30,000 islands that comprise the Stockholm archipelago.

Global travelers often bemoan the loss of romance in getting from one destination to another, but traveling around Stockholm on various maritime vessels recalls a more leisurely era while showcasing the beauty of the Swedish capital. On a sunny day, a short ferry ride from the isle of Djurgarden to the neighboring island of Skeppsholmen can feel like island-hopping in the Mediterranean — especially if you’ve been dancing to “Mamma Mia” at the ABBA Museum.

For years, the isle of Skeppsholmen was most notable for two 17th-century yellow military buildings designed by the same architect behind the Royal Palace. Known to locals as the Long Row, the government-listed historical buildings were meticulously transformed into the Hotel Skeppsholmen in 2009 by the award-winning architectural firm Claesson Koivisto Rune. An arrival via boat enhances the sense of a private retreat on a lush isle. Though Skeppsholmen is accessible by a pedestrian bridge that leads directly to the Nationalmuseum, the hotel capitalizes on its escapist atmosphere with guest bicycles, tennis court and an outdoor restaurant overlooking the inner harbor.

The lawns of the neighboring sculpture garden at Moderna Museet are dotted with sculptures by Jean Tinguely and Niki de Saint Phalle as well as Picasso’s “Dejeuner sur l’herbe,” a work that complements Skeppsholmen’s plein-air vibe.

In the summer, the island hosts the Stockholm Jazz Festival and the avant-garde theater group Teater Galeasen. The small castle along the waterfront is known as Skridskopaviljongen (or the Skating Pavilion) for the 19th-century ice-skating parties held by the Royal Court. 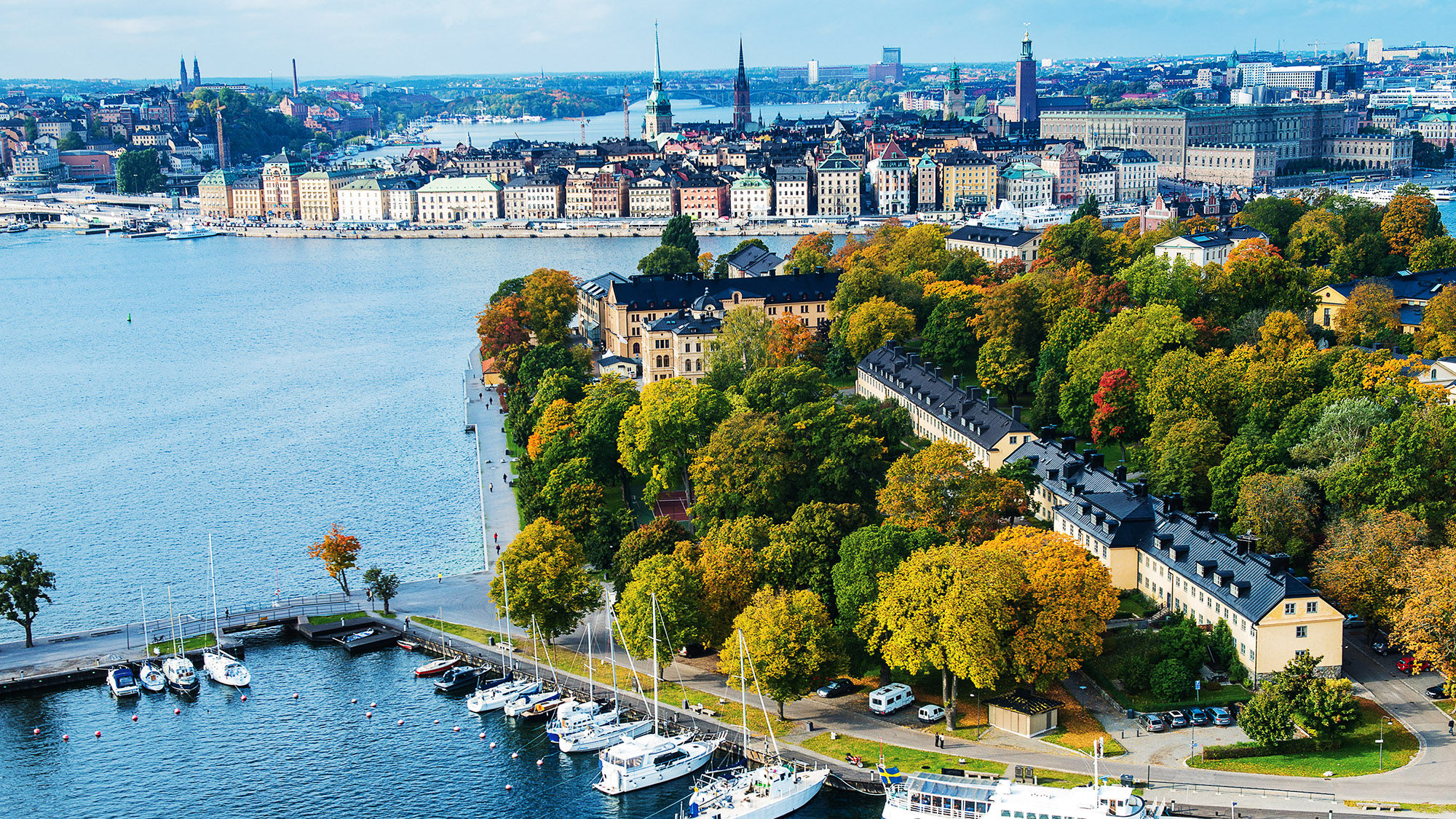 A member of Design Hotels, the Hotel Skeppsholmen juxtaposes contemporary artworks with original features from the property’s 17th-century origins. Each room at the Hotel Skeppsholmen bears a nameplate detailing the history of the room’s previous occupants during its time as a military outpost. Room 262, for example, currently a Junior Suite, was once the quarters of the minister of the Navy, who went on to become the prime minister of Sweden in 1900. While the rooms retain their historical provenance, their light-filled, gallery-white interiors showcase Swedish and Scandinavian design with beds by Duxiana, Boffi bathroom basins and Byredo toiletries.

The hotel’s breakfast buffet at Restaurant Langa Raden is a tribute to Swedish culinary heritage and local purveyors. Baskets are available for guests who wish to picnic along the waterfront or for those who choose to hop aboard Eco Sightseeing for a morning boat ride.

Owned and operated by Elias Nilsson, the Sylvia is a World War II landing boat converted to run on electricity that produces zero emissions and no engine noise, providing a most gracious means of conveyance to the Grand Hotel Stockholm. 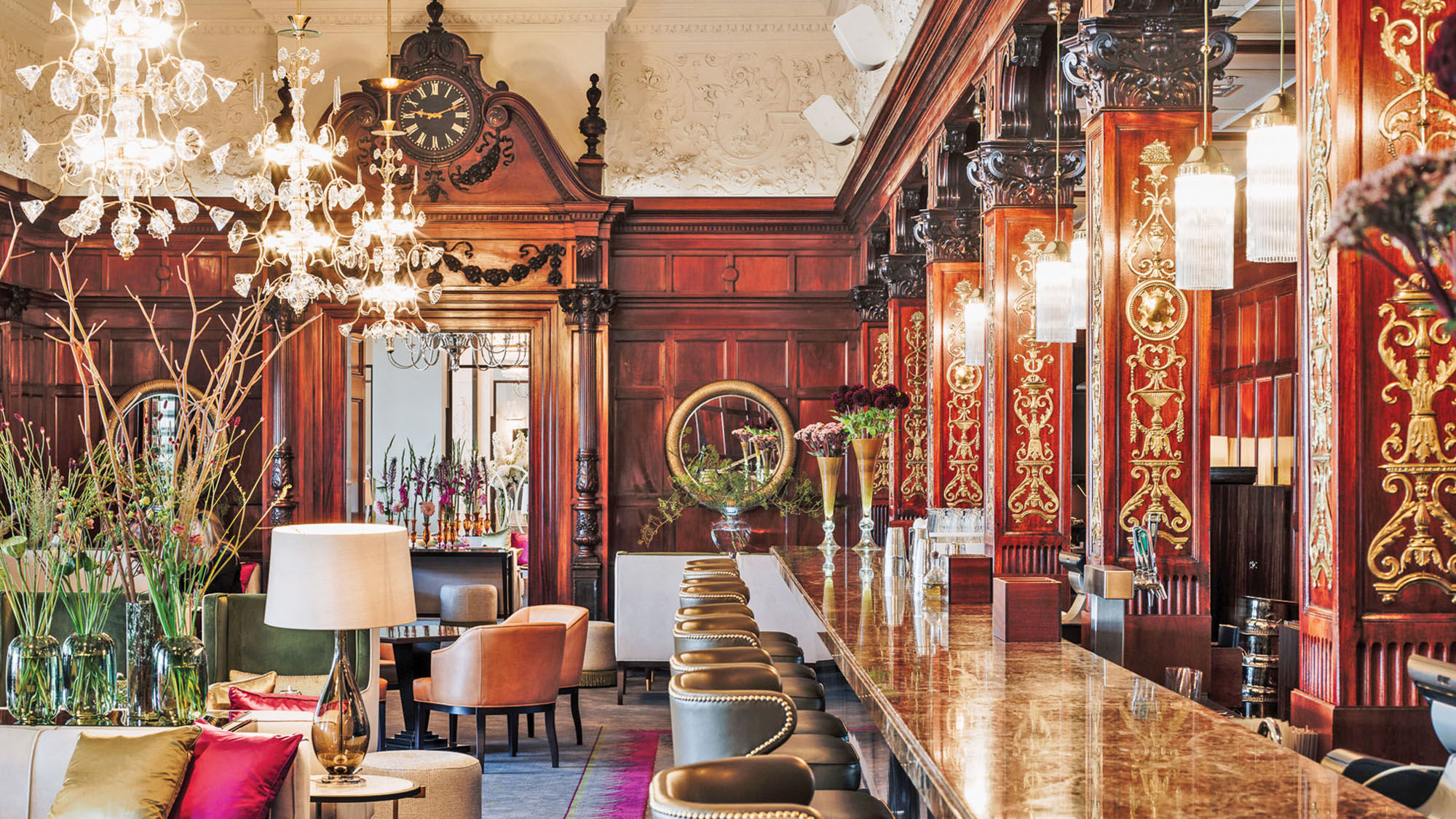 Perhaps second only to the Royal Palace, the Grand Hotel Stockholm stands as the most iconic landmark along Stockholm’s inner harbor. A recent renovation of the five-star hotel’s entrance and facade heightens the sense of grandeur upon arrival in the breathtaking lobby.

Opened in 1874, the Grand and its interiors have been designated as national treasures, notably the Hall of Mirrors, which was modeled on Versailles. Wander through the public spaces and it’s easy to understand why the Grand has hosted nearly all the Nobel Prize laureates and their families since 1901.

From the terrace of a Superior Suite, the beauty of Stockholm’s waterfront appears even more remarkable, with the Royal Palace and the Houses of Parliament located directly across the water. Equally grand are the proportions of the Superior Suites, complete with entrance vestibule and powder room, as well as a settee worthy of Madame Recamier, espresso bar, French doors onto the terrace, dressing room, king-size bed, marble bath and toiletries by Bottega Veneta.

A member of Leading Hotels of the World, the Grand offers 273 rooms and 70 suites, several of which have been classified as Signature Suites for their extraordinary interior designs by Martin Brudnizki. The Flag Suite atop the hotel includes a rooftop aerie, which is celebrated with a signature cocktail at the Grand’s Cadier Bar.

Restaurants at the Grand include two by Mathias Dahlgren, the bistro Matbaren and the vegetarian-based Rutabaga, both of which have been cited by Michelin for their innovative gastronomy. Equally delicious is the copious breakfast buffet served at Verandan, overlooking the harbor.

Guests seeking relaxation are welcomed at the hotel’s Nordic Spa & Fitness, where hydrotherapeutic options include an indoor pool, hydromassage, cold water plunge, cold bucket showers, steam and sauna — a reminder that in Sweden water remains a key to well-being.