In 1983, Melina Mercouri, the then Greek minister of culture, proposed a scheme to celebrate art, history and heritage across Europe. By putting a different city in the spotlight each year, Mercouri hoped to showcase the continent’s cultural diversity, while highlighting shared values. The European Capital of Culture programme, which was established in 1985, has been a huge success, with more than 60 cities receiving a profile boost (two or more cities now often share the annual honour).

Rijeka in Croatia: the culture capital that knows how to party

The scheme shows off cultural life and helps to attract visitors but has also helped regenerate deprived areas, particularly in former industrial cities, such as Glasgow, the UK’s first capital of culture, in 1990, Lille (2004) and Essen (2010). In 2013, it helped Košice in Slovakia make the transition from a manufacturing centre to the tourism hub for the Carpathian region. That year’s co-capital, Marseille, benefited from an investment project of more than €600m and major new attractions including the award-winning Mucem. More recently, a record 5.8 million tourists visited Leeuwarden in the Netherlands during its 2018 tenure, generating €300m.

For Turku, in Finland, its year (2011) was “a gamechanger”, according to Olga Henriksson from Visit Turku. New bars and restaurants have opened in what is now considered the country’s food capital; new arts venues, walking routes and bridges have been built, and there are plans for a history museum and concert hall. The city also teamed up with the university to research the benefits of culture on wellbeing, with doctors giving “cultural prescriptions” to patients (such as free tickets to plays) and events taking place in schools and care homes. Combining culture with wellbeing remains part of the city strategy.

This year’s capitals, Galway City in Ireland and Rijeka in Croatia, will hope to reap similar benefits. But as this is an EU scheme, the UK is no longer able to participate. British cities including Dundee, Nottingham and Leeds were preparing bids for 2023, but are ineligible after Brexit. That means Liverpool, the UK’s second European Capital of Culture in 2008, is also its last.

Many major cities have held the title, including Berlin, Paris and Madrid, but plenty of smaller, lesser-known gems have made the cut, too. Here are 10 under-the-radar cultural capitals that are well worth a visit. 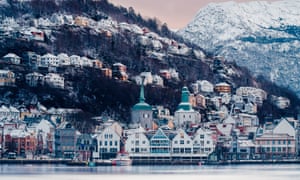 Norway’s second city is surrounded by seven hills and seven fjords. The city itself is easy on the eye, too, especially Unesco-listed Bryggen, the old wharf quarter, with its wooden buildings, alleyways and craft shops, and backstreets crowded with clapboard houses. Learn about the city’s trading history at its Hanseatic Museum (a ticket also includes entry to the Fisheries Museum); visit the four art galleries under the Kode umbrella, including one devoted to Edvard Munch; and attend a concert at Edvard Grieg’s summerhouse. Bergen is also a gateway to the fjords and has hiking trails on its doorstep – several can be reached via the Fløibanen funicular to the top of Mount Fløyen.
Where to stay Marken Gjestehus, a bright guesthouse in a former bakery, has private rooms and dorms (dorms from £15, doubles from £45).
• Read more: A family weekend in Bergen 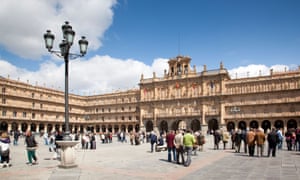 This city of golden sandstone in western Spain is home to the oldest university in the Hispanic world – granted its charter in 1218 – whose beautiful library is open to visitors. Another of Salamanca’s claims to fame is its two cathedrals, the old and the new; daily tours take in both, including access to the terraces and watchtower for views over the city. The Plaza Mayor, or central square, is a huge baroque-design space with 88 arches and carvings of figures such as Miguel de Cervantes. The Art Nouveau and Art Deco Museum is worth visiting for the building alone, a modernista palace of stained-glass windows, never mind the creepy collection of 300 porcelain dolls. Other sights include churches and monasteries, and the Casa de las Conchas, a historic building decorated with hundreds of scallop shells.
Where to stay Hospes Palacio de San Esteban is a hotel in a converted monastery in the old town, with an outdoor pool and terraces overlooking the cathedrals (doubles from £96). 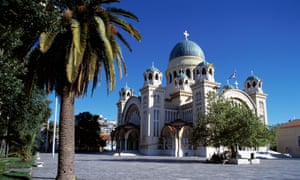 It may not be the most beautiful of places – a slightly gritty port and university city – but Patra has 3,000 years of history, lively squares and low prices to make up for it. The world-class archaeological museum displays Mycenaean ceramics and Roman sculptures and mosaics; the flamboyant cathedral is the biggest church in Greece; and a climb to the medieval castle is rewarded with views over Zakynthos and Kefalonia. Other places to visit include the poet Kostis Palamas’s house and the Roman Odeon. Nights out tend to start from Plateia Georgiou, the vast central square, which is also the site of the neoclassical Apollon theatre. The best way to arrive is over the graceful, 2km-long Rio-Antirrio suspension bridge.
Where to stay City Loft is a modern apart-hotel with balconies and a garden, just north of the centre (doubles from £59.
• Read more: Victoria Hislop – “Patra represents the extremes of Greece” 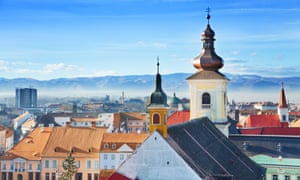 This Saxon city in Transylvania was once one of the most important fortified cities in central Europe, guarded by 39 towers. A handful remain, including the Council Tower, which visitors can climb – although the gothic St Mary’s Evangelical church has the biggest tower of all at 73 metres (also open to visitors). Another architectural feature are the city’s “eyes”: eyelid-shaped windows in the red rooftops. Today, Sibiu is a festival hotspot, with a renowned theatre event in June, plus art, film, jazz, rock and other festivals. Museums include the art gallery in Brukenthal Palace and the Pharmacy Museum. For winter holidays, the Paltinis ski resort is less than an hour’s drive away.
Where to stay The boutique Art Hotel in the old town, 200m from the main square (doubles from £40). 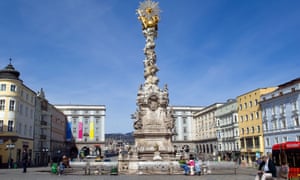 Cutting-edge Linz is a Unesco city of media arts (where art meets technology). The centre of this scene is the Ars Electronica Center on the north bank of the Danube, where visitors can watch artificial intelligence “thinking”, train self-driving cars, programme robots, print in 3D and process their own DNA with gene scissors. The museum holds a festival each September, with concerts, exhibitions and screenings. Street art has its own home at Mural Harbour, where there are graffiti artworks all over the port area – tourists can take a boat tour and a crash course in spray cans and stencils. The Lentos, an eye-catching glass building that is illuminated at night, is the city’s modern art museum, with work by Klimt, Schiele and others. It’s not all modern, though – Linz also has an old town with handsome baroque buildings.
Where to stay Arte Hotel Linz reopened last year as a modern, art-filled hotel, three minutes’ walk from Ars Electronica (doubles from £95).
• Read more: No chintz in Linz 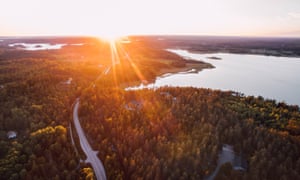 Finland’s oldest city is built on either side of the River Aura, with the cathedral on one bank and the castle on the other, and plenty of waterfront bars and restaurants. Kaskis is the pick of its clutch of New Nordic restaurants, serving a six-course tasting menu featuring lots of foraged forest ingredients (€69). There are a dozen engaging small museums within walking distance, such as the Sibelius Museum, which has weekly indoor and outdoor concerts, and the open-air Handicrafts Museum, showing traditional wooden buildings that survived the Great Fire of 1827. The city is on the edge of an archipelago of about 20,000 islands, best explored by bike or kayak.
Where to stay The Turun Seurahuone was designed in the 1920s by the Finnish architect Erik Bryggman and serves a lavish breakfast buffet (doubles from £148).
• Read more: City break in Turku – where the Finnish started 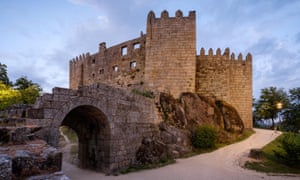 Guimarães is known as the birthplace of Portugal, as Afonso Henriques, the first independent king, is believed to have been born here in 1110. Its well-preserved medieval centre is a Unesco-listed tangle of lanes and plazas, and there are churches, a 15th-century palace and a 1,000-year-old castle to visit. Thanks to its year as culture capital, there are new arts spaces – notably the Plataforma das Artes e Criatividade on the old market square – and new restaurants, including Michelin-starred A Cozinha. A cable car trundles visitors up to Mount Penha, a picturesque viewpoint about 7km away. Further afield, Braga and Porto make easy day trips.
Where to stay The EMAJ boutique hotel, in the converted national bank on the main square (doubles from £57). 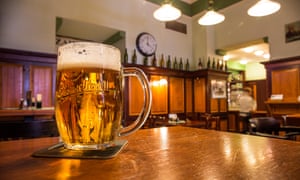 This Bohemian city is best known for its beer: pilsner was first brewed here in 1842 and is still produced today. Drinkers can go on a brewery tour, visit the Brewery Museum – or just sample the wares in one of the many pubs. Another legacy of this industry is Pilsen’s network of underground tunnels, which date back to the 14th century – daily tours explore the passageways, cellars and wells. The historic centre has a gothic cathedral on the main square and a Grand Synagogue, while family-friendly attractions include the Techmania Science Centre, DinoPark, Puppet Museum and zoo. DEPO2015 is a cultural centre with interesting food, fashion and other events – a current exhibition focuses on Czech football. The city is at the confluence of four rivers, with lots of green space.
Where to stay Vienna House Easy Pilsen is opposite the brewery, a few minutes’ walk from the old town (doubles from £57).
• Read more: Pilsen – capital of culture 2015 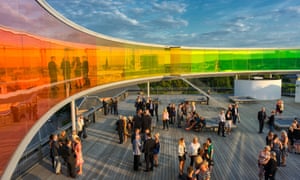 Since it was founded by Vikings in the eight century, Denmark’s second city has undergone a lot of changes – many over the last decade. The docklands have been regenerated to form a new district, Aarhus Ø, which has a network of canals; a harbour bath and a sea-swimming course; an observation tower with views over the city and the bay; and the landmark Iceberg building. Elsewhere, architectural highlights include Olafur Eliasson’s rainbow-coloured skywalk on the roof of the ARoS art gallery; the summer-only Infinite Bridge, a circular boardwalk by Varna beach; and Den Gamle By, an open-air museum with 19th-century buildings. Aarhus is also an emerging foodie destination, from the global goodies on offer at Aarhus Street Food market to fine dining at four Michelin-starred restaurants.
Where to stay DanHostel Aarhus City is in the city’s old telephone exchange and has a rooftop cafe-bar (doubles from £58, dorm beds from £23).
• Read more: Aarhus – what to see 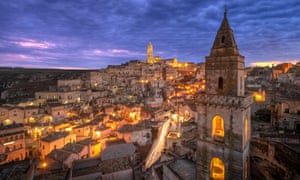 Matera’s two Sassi (“stones”) districts are built on natural caves that have been excavated and extended over millennia. A warren of pale limestone churches, monasteries and palaces rises above the caves, all balanced on the edge of a ravine. Astonishingly, people lived in these caves, without running water or electricity, until as late as the 1960s. Today a handful of case grotte have been preserved as museums. Other must-visit sights include the chiese rupestri (rock churches); the Palombaro Lungo, a huge 16th-century water cistern; and Musma, the impressive Museum of Contemporary Sculpture.
Where to stay Locanda di San Martino has cave rooms, terraces with spectacular views and ancient thermal baths (doubles from £65).
• Read more: Matera – Italy’s magical city of stone