The foreign secretary’s call for up to a million British people abroad to return to the UK immediately was met with anger and dismay by stranded holidaymakers around the world. Travellers who have been desperately trying to get home for nearly two weeks say the Foreign Office (FCO) advice, updated on 23 March, is all well and good, but with borders and airports closing and no repatriation flights, it’s impossible for many to follow the advice.

“Dominic Raab has suggested people talk to their airline about getting home. It is too late for that in many places where airlines have already stopped flying. And in others, airlines are charging rip-off inflated fares,” said Rory Boland, editor of Which? Travel.

“The government must improve its communication and provide British citizens, fearful of being stranded abroad, with useful advice. Where scheduled services have been withdrawn, it should leave no stone unturned to get these people on flights home.”

As well as facing cancelled flights and exorbitant prices for the few still operating, the holidaymakers we spoke to say they have been unable to speak to embassy staff, travel agents or insurance companies.

“We are feeling helpless, stranded and neglected by our country,” said Wendy Child, 27, who is stuck in the Philippines on a honeymoon that turned into a nightmare.

In the House of Commons on 24 March, Conservative MP Caroline Nokes berated the Foreign Office’s response so far and urged Raab to “get the process fully under way”.

We spoke to Wendy and other British holidaymakers trying desperately to get home.

Wendy and Rich Child, 27 and 31, from Bath, stuck in the Philippines 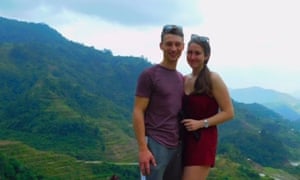 Wendy and Rich arrived in the Philippines on 8 March, on a three-week honeymoon they had spent eight months planning. On 13 March they got a message from their airline saying their flights home were cancelled. On 15 March Manila went into lockdown and they travelled from Bohol to Cebu, which has an international airport, in the hope of booking a new flight. Since then they’ve spent £2,000 on cancelled flights.

“We have been trying to get a flight home since 13 March but they have all been cancelled.”

They booked their original flights through STA and their first tour through Tripadvisor, and had planned to do the rest of their trip independently. Now they are stuck, having exhausted every option.

“Travel agents are telling us there is nothing they can do, as there are no options and no flights. We have been trying to contact our travel insurance for two weeks but are just kept on hold and then cut off. It’s the same with Emirates, STA’s emergency helpline and the British embassy in Manila.”

They’ve also contacted their MP, Andrew Murrison, and the FCO, but are unsure what to do next in the absence of any advice other than “see the government website”.

The couple are at a loss as to how to follow Raab’s advice to come home. “We are aware there are priorities in the UK with controlling the pandemic, but we haven’t even been told they will put on flights next week, or in a couple of weeks, or anything so we have no idea what the coming days/ weeks hold for us. We’re trying to remain positive but it’s proving difficult.”

Judith and David Baker from Chiswick, London, stuck in Argentina

The Bakers were 10 days into a two-month trip to Argentina, Chile and Uruguay to celebrate their 65th birthdays when Argentina closed its borders and imposed a 14-day quarantine on all foreigners who had arrived from a country with cases of coronavirus within the previous 14 days. This meant they couldn’t move from their hotel in the town of Villa La Angostura in Patagonia. They are still there, unsure of their next move:

“Raab is advising us to get home but without any knowledge of whether this is feasible. We are deeply worried that the limited options to get home will disappear before we can get to Buenos Aires, and we will then be stranded here indefinitely.”

Argentina went into lockdown on 20 March, until 31 March, and cancelled international flights from countries affected by coronavirus. The Bakers are researching flights to from Buenos Aires to London via Sao Paulo or Rio, but even if they could secure one of those flights, with no internal flights, buses, trains or car hire, they have no way of getting to Buenos Aires , 1,000 miles away.

They are currently covering the cost of their accommodation themselves, after their insurance company refused to help. “We are in safe accommodation for now, but are increasingly concerned for the future, especially as the situation will no doubt get worse before it gets better,” said Judith. “We are deeply worried that the limited options to get home will disappear before we can get to Buenos Aires, and we will then be stranded here indefinitely. My epilepsy medication will run out in four weeks’ time.” 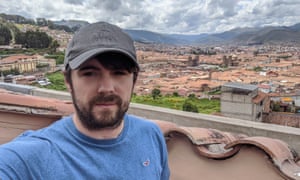 Nathan is one of more than 400 Britons trapped in Peru after it shut down on 16 March, almost without warning.

After working on a ship in Argentina for six weeks, he arrived in Cusco for a two-week holiday on 14 March, “confident that it would be OK, because Peru had minimal cases at the time”. On 15 March Peru declared a state of emergency, shutting its borders the following day and cancelling all international flights.

“On the first day of the closure we all tried to contact the British embassy, but that had closed. We all felt pretty abandoned at that point,” Nathan said.

Since the lockdown he has been staying at the Wild Rover hostel in Cusco. “I can’t fault the hostel, it is doing everything possible to make this experience less painful. There are probably about 150 tourists here at the moment. Everyone is pretty fed up. Some people are running out of cash and nobody expected the awful £3,000-plus quotes to fly home.”

On Saturday, Raab said he had secured a flight to bring back British nationals from Peru next week, but Harris is concerned that even when a rescue begins, those stuck in Cusco will be unable to reach the capital, Lima. “Just organising a flight would be pointless if none of us can make it to the airport. There are no taxis and no public transport.” 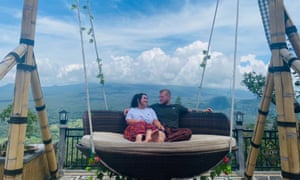 Mental health nurse Abby, and her boyfriend, Jake Deane, 24, were due to return from an 11-day holiday in Bali with Hays Travel on Wednesday, on an Emirates flight, but it was suddenly cancelled a day before departure.

“We were even allocated seat numbers 30 minutes before we heard about the cancellation. We went to the airport to speak to the Emirates desk, but after waiting three hours, we were turned away. Airport staff threatened to call the police and kicked everyone out. After finding out about another flight last night for £5,000, we took out a loan. Within the 20-minute taxi ride back to the airport to pay for the new flights, they had sold out again. Our parents have been contacting our local MPs and have started an online petition. I have attempted to contact our insurer many times, but I’ve only had an automated response via email, stating they will reply in five days.”

The couple are staying in a hotel with four others who are stranded. Hays Travel has offered to cover her bill for another three nights, but after that the they will be expected to pay the bill themselves.

“We’ve tried other airlines and websites, but we can’t afford the high prices and so many routes are now closed. We are as safe and comfortable as we can be in a foreign country at this scary time, supporting each other and trying to stay positive. But it’s unsettling not knowing when we are going home.”

Abby is also keen to return to her work, supporting “very vulnerable people … Given the current social crisis and isolation at home, they need support now more than ever.”

Grace and Ellie, 22 and from Lancashire, stuck in New Zealand 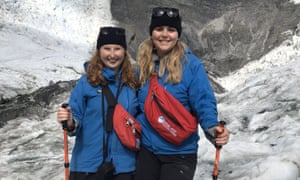 Grace Murray, from Preston, has been backpacking for the past four months with her friend Ellie Taylor, from Lancaster. They are currently stuck in New Zealand, one of the last stops of their trip. They were due to fly to Fiji on 13 April, and on to Bali with Emirates. Due to coronavirus, they moved the Fiji flight forward to 23 March, but have faced multiple cancellations.

“We spent the remainder of our money on this flight, but within 45 minutes it was cancelled, and we are yet to get a refund,” Grace said. “After hours on hold, we managed to get through to our travel agent, STA, who booked us another flight home via Australia and Dubai – paid for by the credit from our original Fiji and Bali flights.”

However, shortly afterwards transit restrictions were enforced for Australia, and they were informed they could not transit longer than eight hours, while around the same time Dubai closed its borders, and so, yet again, the flight was cancelled. They say the British embassy in New Zealand has been “vague” and that “everyone is just passing the blame”. The advice was to stay where they are for now and wait for more commercial flights to become available, but it is unclear when that will be.

“We have had to book into a hostel for the foreseeable future,” Ellie said. “However, they are only selling private rooms, to minimise social interaction, so it is more expensive.”

The situation is complicated further by Grace needing to get more prescription medication: “My boyfriend was meant to meet us in Bali with more medication for me. I only brought enough for five months, knowing that he was coming out with more,” Grace said. “It is going to be hard [for him] to get here, as New Zealand is in lockdown.”

“Everyone is just feeling a bit down, shocked and bewildered about how the situation has escalated here,” said Ellie. “All anyone talks about is coronavirus, there’s no escaping it. It’s very tiring.”

Tips for those stranded abroad

From Rory Boland, editor of Which? Travel

Crucially, don’t accept a refund from your airline while you are stuck. The airline has a legal responsibility to get you home – either on its own planes or those of another airline – and that ends once you’ve accepted the refund. This may seem academic in some instances where airlines have withdrawn all services, but it’s important in places where flights are still running.

If flights are running but your airline won’t rebook you on a flight home, buy a new ticket with any airline at any price. You have the right to claim for this new ticket from the original airline. Fly as soon as possible, as flights are continuing to shut down.

Don’t expect a great deal of help from the embassy or FCO, but it is important you register with them if you are completely stuck, in case rescue flights are subsequently organised.

People stuck in many destinations, including Peru and Cambodia, have set up support groups for stranded British and Irish travellers. These are useful for updates and support. Look for hashtags on Twitter, such as #stuckinperu, #stuckincambodia, #getushome or groups on Facebook.