I take train not plane within Europe because it’s a better travel experience. But switching to rail can also be the single biggest thing an individual can do to cut their carbon footprint.

Eurostar says its research has found that taking the train instead of the plane from London to Paris cuts CO2 emissions by 90%. The benefit could be even greater, as CO2 emitted directly into the upper atmosphere is thought to do between two and three times more damage to the environment than the same quantity emitted at ground level. You can compare the environmental impact of different modes of travel at ecopassenger.org.

So consider the train within Europe and do the planet a favour. You might find you’re doing yourself one, too.

To look up train times almost anywhere in Europe, use the very capable online timetable at the German Railways website – ask it for Lisbon to Moscow and you’ll see what I mean.

For a printed timetable to take with you, buy a copy of the European Rail Timetable. Published since 1873, it covers all the major train routes in Europe. The same website also sells an excellent rail map of Europe (£11.99 plus p&p), with high-speed lines in red and scenic routes highlighted in green.

Faster and cheaper than you’d think 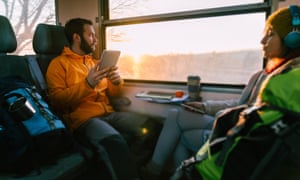 A one-hour flight takes up to four hours when check-in and ground transportation is added. Trains run city centre to city centre, some reaching 200mph, with free wifi, power sockets, a cafe-bar and even a proper restaurant car sometimes. If you book in advance you’ll find budget train fares like these: London to Paris (2hr 20min) from £44; London to Amsterdam in (3hr 55min) from £35; Paris to Geneva (3hr 9min) from €29; Paris to Turin (5hr 40min) and Milan (7hr 9min) from €29; Paris to Barcelona (6hr 27min) from €59; Amsterdam to Berlin in (6hr 22min) from €39.90; Berlin to Prague (4hr 28min) from €19.90. Book as early as you can, but you can get these cheap rates even a couple of weeks ahead, depending on the day of the week and month you’re travelling. For cheap Paris-Milan tickets book a month ahead in winter, but ideally two to three months in summer, as it’s very seasonal.

On many occasions I’ve left London on a morning Eurostar to Paris, then caught an afternoon TGV onwards to Geneva, Nice, Milan or Barcelona arriving the same day – no airports, no flights, great scenery and time to myself.

My top tip? Allow an hour or two for lunch at the amazing Le Train Bleu restaurant at Paris Gare de Lyon, serving hungry travellers since 1901.

Further east, Austrian Railways (OBB) has been reviving the fortunes of the once common overnight sleeper with its Nightjet trains. With routes such as Cologne to Vienna, Munich to Rome and Zurich to Berlin from €59 with couchette, €99 in a two-bed sleeper, and €169 in a single room en suite (breakfast included), these overnight trains are a highly attractive option. Take a lunchtime Eurostar from London to Brussels and high-speed train to Cologne, then the Nightjet will get you to Vienna before 9am next morning.

The Thello sleeper to Italy also deserves a mention; use it to get from Paris to Venice from €29 including a couchette in a six-berth compartment. It may save a hotel bill too.

My tip? Trade up to four-berth couchettes for more space, from €45 per person and bring a picnic and bottle of wine for that midnight feast. Nothing beats rolling across the causeway into central Venice, then strolling out of Santa Lucia station to see gondolas and vaporettos right in front of you. 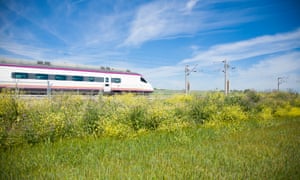 Here’s the rub – no single website sells tickets for every European train operator at the cheapest rate. But two websites come close.

Loco2.com was started by two British entrepreneurs who wanted to make booking trains easier. It connects to the French, Spanish, Italian, German and Austrian ticketing systems to sell tickets at the same prices as the operator with the same print-your-own or smartphone-based ticketing. There’s no fee or mark up and everything’s in plain English, making it arguably the easiest place to buy tickets across most of western Europe. Thetrainline.com has similar connectivity and a useful price prediction tool, but now adds a booking fee of around 3% on many journeys.

Even Loco2 doesn’t connect to every operator. The only site selling cheap tickets from Prague to Budapest from €21, Prague to Krakow from €19 or Munich to Prague from €15 is Czech Railways. This also sells one of the best bargain fares in Europe: Brussels to Prague from €21 – but you must click “more options” and “travel via” then specify “via Cheb”!

Similarly, for Budapest to Zagreb from €29 use Hungarian Railways; for Lisbon to Porto from €15 Portuguese Railways, for Stockholm to Copenhagen from around £20 Swedish Railways.

For international routes the operator’s website for the country where a train starts is the first place to look, with its destination country’s site the next place to check.

If you’re heading to or via Germany, German Railways sell tickets from London to Germany from €59.90, combining Eurostar to Brussels and onwards travel on superb high-speed ICE trains all on one ticket. Book at bahn.de or call DB’s UK office (08718 80 80 66).

Eurostar, German and Austrian railways open bookings up to 180 days ahead, but most other European trains open for sale 90 or sometimes 120 days ahead. Just like flights, you get the cheapest fares by booking in advance, with prices often lower mid-week than on busy Fridays or Sundays.

It can pay to break a longer journey into stages, for example that journey from London to Vienna by Eurostar and Nightjet can be booked using loco2.com for London to Cologne and nightjet.com for Cologne-Vienna. This gives more control – on longer trips you may want to allow more time between trains than journey planners allow. 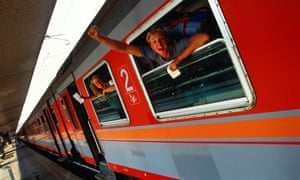 For a go-as-you-please tour of Europe’s cities, buy an Interrail pass. When InterRail started in 1973 it was solely for young people, but now there are passes for adults, children, youths and seniors.

Interrail gives unlimited travel on all the trains run by the participating national operators all over Europe. For example, a two-month pass, allowing 10 days of travel, costs £362 adult, £278 youth and £326 senior – that’s travel anywhere in Europe for £36 per day. Passes for children up to age 11 are free, when they are accompanied by an adult.

You still need to pay reservation fees for many trains in addition to the pass: Eurostar charges a €30 passholder fare from London to Paris or Brussels, and you can reckon on a €10 fee for each inter-city train ride to, from or within France, Italy, Spain or Sweden, sometimes more. But there are few or no fees to pay within or between Germany, Austria, Switzerland, Denmark, the Czech Republic or Hungary, unless you want a couchette or sleeper.

There are also single-country Interrail passes. For Spain it’s worth comparing these with Renfe’s (Spanish Railways) own Spain Pass and for Switzerland with the SBB’s (Swiss Railways) Swiss Travel Pass. 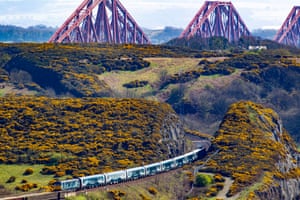 If you don’t want to go it alone, a number of companies can help. Try Railbookers for customised independent tours, or Great Rail Journeys for escorted group tours. The latter is offering a seven-day Castles and Wildlife of Scotland trip using the new Caledonian Sleeper train and including time at Alladale Wilderness Reserve from £1,595pp. There’s also Rail Discoveries, which has a four-day escorted trip to Bruges from £355pp.

Looking for a holiday with a difference? Browse Guardian Holidays to see a range of fantastic trip

New measures announced to ease disruption for people travelling home for Christmas
Recent Posts
This website uses cookies to improve your user experience and to provide you with advertisements that are relevant to your interests. By continuing to browse the site you are agreeing to our use of cookies.Ok