On a drizzly day, Britain isn’t looking – or tasting – its best. I’m at Watford Gap services on the M1, the country’s first service station on the country’s first full-length motorway, both 60 this year (although the restaurant opened in 1960). “If you want to see Britain, go to Watford Gap,” David Lawrence had told me. “If you want to taste Britain, go to Watford Gap.” I want to do both of those things.

Lawrence is an associate professor at Kingston University whose PhD was Motorway Service Areas, Their History and Culture. He has written two books about them as well. I think you could safely describe him as Mr Service Station. “Dr Service Station,” he corrects me, before I head to Watford Gap.

Today, Watford Gap services is operated by the Roadchef group. The building – designed by the Odeon cinemas architect Harry Weedon – looks tired, with tufts of insulation sprouting from the roof at the back. Inside, water drips on to the floor; an employee mops up, then deploys a “Caution: wet floor” sign. A man with a beard and a Maccy D’s meal sits down there anyway. “A bit of rain never hurt anyone,” he says, cheerfully.

A big part of Britain is here – not just car owners stopping to refuel, but all the people working. The choice of food is: McDonald’s; the Fresh Food Cafe, where there are more burgers, fish and chips or curry; or Chozen Noodle. There’s also a Costa and a WH Smith. I choose Chozen because I have never had one before. “Does teriyaki stand for terrible, hahaha?” asks a businessman in front of me, who is on his way to the NEC in Birmingham. I opt for the red Thai vegetables with rice – £8 with prawn crackers and a ginger beer. Not terrible, but gloopy, unsurprising, uninteresting … OK, quite terrible.

Watford Gap is significant for several reasons. It is the place where, traditionally, south-east England ends and the Midlands and the north begin (or vice versa, of course, depending on whether you are northbound or southbound); it is a gap between two hills where the road was squeezed in next to the canal and the railway. It also marks a moment between two eras, with the service station being a milestone in Harold Wilson’s vision of a journey to modernity (as well as a then-new 24-hour experience for the people who stopped there).

Originally run by a company called Blue Boar, it was a place for drivers to stop for the human necessities: tea and a pee. And for their cars – more prone to breakdown than today’s – to have a rest, too. It was a place for nocturnal motorcyclists to speed to as fast as their machines would carry them on three lanes free of traffic. It was a stopover for bands on the road – the Beatles, the Stones, Pink Floyd, Dusty Springfield, the Eagles. And it was a place for a grilled meal. “Grilled ham and other grilled meats, vegetables, fairly straightforward desserts, puddings and custards, fruit flans, ice-cream … that kind of thing,” says Lawrence.

It wasn’t the cross-section of British society it is today; more a place for the upwardly mobile. “It would have been business travellers dining on expense accounts,” says Lawrence. “Some families would have stopped – middle-class or upper-working-class families who either had cars through their jobs or were able to purchase one.”

But Watford Gap was never glamorous. Newport Pagnell, which opened soon after, 23 miles to the south (it was actually the first to open to all traffic; Watford Gap was originally just for trucks), was posher. It was run by the Italian Forte catering dynasty, who realised that a bit of glamour was essential to captivating the diner, and would go on to run smart hotels around the world. 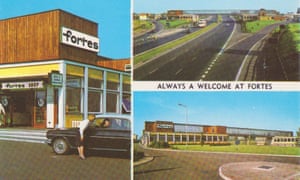 Newport Pagnell, designed by Owen Williams, had a pedestrian bridge across the road that was based on a Chicago model. “There was this incredible modernity just in the buildings, and that began to give an uplift to the dining experience,” says Lawrence. “Forte introduced chefs to prepare fresh food, which would be cooked in front of the diners while they were sitting on stools at a long bar. Quickly, the motorway experience shifts away from the Blue Boar cafeteria idea to a much more sensory experience.”

This shift upwards reached its peak 30-odd miles north of Watford Gap, at Leicester Forest East, which opened with the second phase of the M1 in 1966. It was another bridge services, run by the Ross Group in Grimsby with a fresh delivery of fish every day. And the restaurant, designed by Terence Conran, was on the bridge, with waitresses in airline-style uniforms. Imagine it – sitting in modernist Conranian splendour with E-Type Jaguars roaring underneath, while women dressed as cabin crew served you cod in parsley sauce.

I am beginning to understand why my own early long-car-journey food memories don’t involve motorway service stations at all, but sandwiches and hard-boiled eggs, unwrapped from tinfoil on a windy grass bank.

Today you can still eat fish above the motorway at Leicester Forest East, but it comes – with chips – from Harry Ramsden’s. The food court space is shared with other franchises. Leicester Forest East and Newport Pagnell are operated by Welcome Break – much the same as Roadchef, except Burger King replaces McDonald’s, there is Chopstix Noodle Bar instead of Chozen, Starbucks instead of Costa. Different names; the same experience. No 60s-style table service: you queue up to order or do so from a very of-this-time machine. Then you sit down and look – not out on to a brave new road – but down into your phone, scrolling with one hand while shovelling fast food with the other.

At Newport Pagnell, the bridge across the road now looks more like a dare than modernity. The windows have been covered so that you can only see out in a couple of places; the whole thing seems to be held together by gaffer tape and shakes when lorries pass underneath. In the car park, by the bins, I meet a family having a picnic. Friendly enough – too friendly, perhaps, because they’re a family of rats. You’re welcome.

How did it get to this? From the boom times to rats? Dr Service Station speeds through half a century of motorwayside eating. The romance went quickly and reputations declined for several reasons: the government introduced rules and regulations, service stations became familiar and prosaic, and roads got busier. “There was a sort of perfect storm in declining service and increasingly crowded facilities, which just meant that they ceased to be pleasant places to go.” 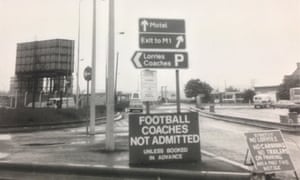 Through the 70s, service stations were often tough places of football hooliganism and vandalism, rather than epicurean delight. It was fried food, English breakfasts and a few “tired English classic meals, such as pork and vegetables, lamb and vegetables, straightforward puddings, ice-cream, jellies, spotted dick … that sort of thing”. Anyone want to stop for a spotted dick and a punch-up?

In the 80s, service stations tried to copy familiar outlets in town – McDonald’s, for example – but with limited success. It was only in the 90s that the real franchises arrived. “And rather than being what is essentially a motorway version of a family-run cafe, albeit on a huge scale, service areas become pretty much a box of brands that we recognise from the high street,” says Lawrence.

If you remember encountering Little Chef at motorway service areas, you’re not wrong. A direct translation of a US concept (also called Little Chef), the plump little white cuisinier on a red background had been serving up family-friendly gammon steaks and pancakes on A-roads before the motorways started. But then when the Forte Group brought Little Chef, and Granada (now Moto) subsequently acquired Forte, he began appearing at their motorway services, too, happily carrying his plate aloft, between the eras of high street copies (Little Chef was pretty much Wimpy with extra external noise and carbon monoxide) and brands-in-a-box.

But I want something to eat that is not exactly the same as everywhere else beside the motorway – maybe even nice. And it’s not a hopeless quest. First, we need to turn back again, to the late 60s and the construction of the M6. It cut through the farm of John and Barbara Dunning near the village of Tebay in Cumbria. Diversifying from hill farming, the newly married Dunnings won the bid to run the services there, and in 1972 opened a small cafe serving locally sourced food.

And, although it has grown a bit, that’s pretty much how it still is: family-run, no franchises or fast food, a kitchen serving homemade dishes made locally using local ingredients. Plus a farm shop, a butcher, a sense of place and a view of the fells. It wins awards, tops polls and comes heartily recommended by Lawrence.

The trouble is, Tebay is 176 miles north of Leicester. That’s a long way for me to go for a meal. It’s OK, though: a mere 82 miles away, on the M5, is Gloucester services, opened in 2014 by the same family, along the same lines. Plus, it operates in partnership with Gloucestershire Gateway Trust, marrying business with charity, helping the local community, providing income and jobs, social regeneration. Oh, and Sarah Dunning, who has taken over running the business from her parents, will be there, down from Cumbria.

The food is excellent: sausage, egg, haggis, bubble and squeak, mushroom, all locally sourced, ethical, and fit for Guardian readers and writers. It sets me back £7. I eat by the huge window, looking out at a pond, with wagtails – both pied and grey – wagging their tails at the Cotswolds escarpment beyond. 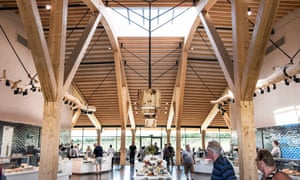 From the outside, Gloucester Services, designed by Glenn Howells, looks like a big Teletubby house built into a hill and blending into the landscape. Inside, it’s Grand Designs – a dramatic space, but calm. No music (apart from local brass bands and choirs from time to time) and a lot of wood. “I suppose it’s a bit more ski chalet than motorway service area,” says Dunning.

Ski chalet? It’s a service station for posh people, isn’t it? “Service stations are big infrastructure projects – they cost a lot of money to build,” says Dunning. “To make them viable, you have to make them relevant to everybody. We can’t be, and we wouldn’t want to be, a preserve for the elite. We want to serve Mr and Mrs Great Britain.”

She shows me round. No kids in the wooden play area on a term-time Thursday, but Mr and Mrs Great Britain are in, having a meal or coffee, or shopping in the farm shop. There’s a spread of breads, fresh from two local bakeries. All in all, they use 130 local producers, making, among many other things, organic yoghurt, macaroons, cider and sausage rolls. There’s a cheese counter, a butcher (T-bone steaks recommended) and a fishmonger with deliveries from Paignton and Newlyn. Pick up some octopus at the service station on the way home, will you, dear.

Seriously, there’s octopus. And with it perhaps the return of glamour; a 21st-century glamour. Once, it was fresh fish from Grimsby served on a bridge by women dressed in cabin crew uniforms. Today, it’s octopus from Newlyn served by a middle-aged man called Matthew wearing a fishmonger’s apron in Teletubbyland. I’ll take that.

• This article was amended on 26 March 2019 to clarify that the M1 was the country’s first full-length motorway. Further, the author’s reference to a sighting of a yellow wagtail has been corrected to refer to a grey wagtail.