Since 2006, the Kaysers have been the sole inhabitants of Bikendrik, a tiny island in the archipelago of Majuro, the Marshall Islands’ capital atoll. They live in a tropical cliche, and have leased it for 100 years.

What the Kaysers really like to talk about, however, isn’t palm-fringed beaches and azure water. They like to reminisce about the time they would execute rocket launches, and they recall it in vivid terms:

In the morning, no one would eat breakfast. Toilet flushes were heard throughout the house as everyone would start to get nervous. Then the loudspeakers: x minus half hour, x minus 25 minutes, and so on. Each minute would feel drawn out, but nothing compared to the final countdown: 10, 9, 8, 7, 6 … Then finally, flames and roars, and the bloody thing would take off from the oasis with everything vibrating. You’d just pray and count — at 10, you’d know if it’s a success.

“I was addicted to it,” says Susanne Kayser. “Maybe that’s why [Muammar] Gaddafi liked us so much.” 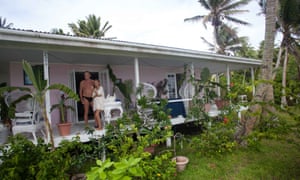 Susi and her husband Lutz, the mastermind behind the low-cost “Volksrocket” rocket launch system, spent 28 years in the Libyan desert and became the dictator’s only western friends.

“We really had so much fun,” Susi recalls. “Gaddafi was such a wonderful man.”

Growing up amid wartime bombings in Third Reich Stuttgart, Lutz dreamed about going to space. He wrote a letter to Wernher von Braun, the architect of German and US aerospace programs, whose recommendations were pragmatic: astronauts have to be small, light and few, or bringing them to the moon would be too expensive. Lutz had better become an engineer, he advised.

So that’s what he did. His brainchild, Otrag (Orbital Transport and Rockets, Inc) became the first commercial developer of rocket technology. The idea was as simple as it was revolutionary: applying familiar modes of mass production to sophisticated space design could cut costs by 90%. Using cheaper material –stainless steel pipes for fuel tanks, windshield wiper motors – Lutz’s modular low-cost rocket looked like a giant pencil.

“My rocket system is like Lego,” Lutz says, sipping coffee on his private Pacific island. “You can easily explain it – everyone knows what Lego is. You always use the same bricks to put together.” 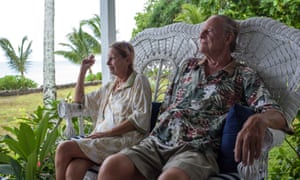 The couple don’t deny Gadaffi’s atrocities, but insist they never saw them. “I’m sure there were nasty things, but now show me a country that has not nasty things and does not violate any human rights. I have never in my whole life encountered any such country,” Susi says.

Susi was mesmerized by the dictator’s beauty. In his boots and starched uniform, he looked like an English officer, she remembers. Like a Greek god. Lutz describes him as “a master of diplomacy in internal politics”, skillfully balancing the country’s tribal factions and political interests. “It would be much better if he made a kingdom,” says Lutz. “Then he could’ve been happy like the Saudis.”

In the late 1980s, the dictator began to change. Paranoid, possibly on drugs, and withdrawing almost completely after the American bombings in 1986, the Kaysers saw him less and less – two or three times in the last 20 years.

In front of them, Gaddafi turned into a “caricature of a once great man”. “I told him: I might love you, but I don’t like you any more,” Susi recalls, suspecting the leader avoided friends of the past because he was ashamed.

In 2000, with their investment lost and Libya slipping into chaos, Lutz and Susi had enough.

A small Pacific island resort seemed a better retirement plan. Susi could cook and run the house, Lutz continue his research. The Marshall Islands seemed promising: its US-inspired constitution would be a fresh breeze from the Kaysers’ African experience.

Their website advertises “a personal slice of paradise”. For $690/night, visitors can enjoy the health effects of the warm lagoon and Susi’s gourmet food. While waiting for tourists, the Kaysers keep busy: Susi offers pro bono legal advice and Lutz has just finished his third revision falsifying Einstein’s relativity theory. They are trying to finish their memoirs, Rockets and Dictators, by the end of the year. They have 13 cats. 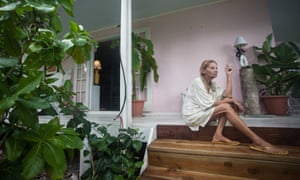 “Gaddafi said once when asked by a reporter about me: ‘Susi – she doesn’t lie. She’s dangerous enough when she says the truth!’” she says in a thick German accent.

“You know, sometimes when I’m cooking I think of the past; of all those people I met: kings, dictators, presidents. Then I start to giggle. Because now I’m standing in the kitchen preparing food for other people.”

Susi has baked a lemon olive oil cake with icing and layers, served on floral porcelain plates. She does not have a slice.

She and Lutz had been a case of love at first sight, at a job interview at Otrag’s office in Stuttgart, as he returned briefly from the Congo. “I gazed, he gazed and I do not know why we spoke at all,” Susi remembers in the couple’s co-written memoirs. “It was clear right away we would spend the rest of our life together. But first I signed a contract to work as his secretary.”

From then on, they were practically never apart. As they toured the world in a private jet, their life reads equal parts fairytale and spy novel: swimming with sharks in the Seychelles, and being bitten by camels in Libya. Giggling at Saddam Hussein’s political writings on the pink silk sheets of an Iraqi guesthouse provided for them by the dictator himself. In Manila, Imelda Marcos threw a Vienna Opera Ball in their honor. 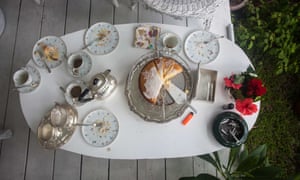 She has written 70,000 words of the forthcoming joint autobiography, but complains she’s only up to 1982. It wasn’t always easy: in addition to assassination attempts and moody dictators, Susi had two angry ex-wives and three stepchildren to deal with.

Their home is something between a colonial museum and a doll’s house, filled to the brim with exotic artifacts.

Among the most surreal relics is the Kaysers’ family inheritance: a vast collection of Nazi memorabilia. A little table holds original badges, swastikas included. Mein Kampf is missing from the collection as the Kaysers’ signed copy was stolen.

Susi read parts of it.

“I tell you frankly it is so stupid you can’t read it,” she says. “It’s impossible. It’s like Gaddafi’s green book, or Saddam Hussein’s red book. It’s really for the mentally unprivileged, that’s what I always felt.”

An allegedly original Hitler painting hangs alongside a Matisse and a Gaugin. 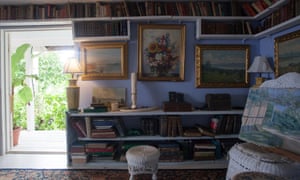 After 50 years, Lutz insists that his technology is still the most cost-effective way to launch just about anything into space. Private actors, like SpaceX, have reduced the price but Otrag could still make it four or five times less expensive – even though virtually everyone has a satellite nowadays, launches still cost more than the payload.

“It’s like transporting potatoes with Rolls-Royce,” Lutz complains. “You can try to reduce the cost a little bit of Rolls-Royce but you’ll never get down to the cost of a small truck.

No one ever bought Lutz’s Volksrocket. You’d be surprised that no one wants it 10 times cheaper, he says. It’s all politics: for the major space powers, governments pay their own big companies with tax money with little incentive to reduce costs. Besides, most stakeholders have systems in place today.

If the price is right, Lutz wouldn’t deny an offer today, but those interested often had dubious intentions.

As they left Libya, all equipment and installations were confiscated by Gaddafi’s forces as they hoped to use the technology (they never managed). The German investors lost all their money. Other Arab countries offered chances to start a new, mostly veiling missile aspirations in civilian purposes. “Saddam was honest,” Lutz recalls. “He said: ‘I don’t want to pretend that I want to go to space. I want to go from A to B so I need cheap and easy-to-fabricate rockets.’”

With showers and hairdryers on to drown out their voices from Saddam’s spies, he told Susi he’d never sell Otrag to be used for weapons of mass destruction.

“As a scientist you wanna have a certain legacy, and it would be nice to see it applied,” Lutz admits. “But to see the technology in ballistic missiles would be sad so it’s a very, very difficult decision. I will probably not live to see it,” he admits. 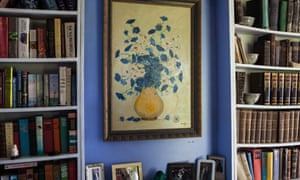 Bikendrik Island Hideaway doesn’t see many visitors. After shipping containers, savings and investments were stolen en route to the Pacific, only one out of four planned beach houses materialized. Tourists who come are extremely satisfied, the Kaysers assure, pointing to a feature in Japanese Elle.

Susi is slightly offended, but not surprised, that even residents of nearby Majuro don’t often come for lunch: the American expats are wary of them, and besides, they don’t appreciate gourmet cooking, she says.

She hasn’t been to Majuro in half a year – Lutz gets supplies every few months and they have few acquaintances there, anyway.

“We have always lived in some godforsaken place,” Susi says; in Zaire – now the Democratic Republic of Congo – their farm on a plateau was only reachable by plane, in Libya their lakeside mansion only by boat. “It doesn’t make for friends, you know. We’re too far away.”

Nowadays, the Kaysers never get dressed. Locals refer to them as Adam and Eve. “We’re just those crazy Germans running around naked,” Lutz smiles. Bikendrik was a jungle when the Kaysers arrived.

Painstakingly, they turned it into a park: clearing up shrubs by machete, ridding the ground of thousands of rocks. In the arid coral soil, Susi planted the grass by hand, one root at the time. As her tropical plants kept withering, she replanted them in ceramic pots.

She points out one her favorites: a delicate fuchsia flower – a Libyan desert rose she bought in Majuro.

“I didn’t bring anything from Libya. Only my memories. And they grow wild here.”

This story was supported by The GroundTruth Project