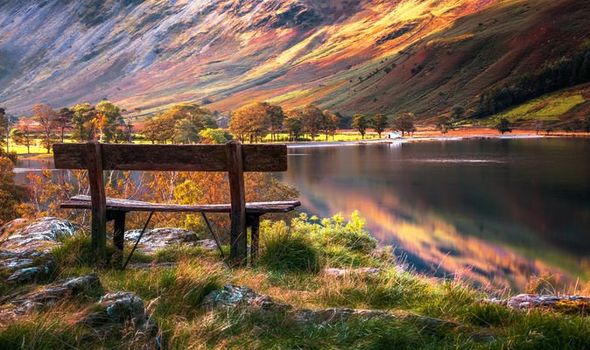 It was February, and while there was gradual awareness of the silent killer out in Wuhan, we were still more than a month away from lockdown. Pandemic panic had yet to grip the nation by the throat and halt life as we knew it.

No, the headlines were dominated by Storm Ciara, the powerful force of nature set to sweep the country with gusts of up to 130mph and widespread flooding. And we had a date with the Lake District, no raincheck considered.

So it was that we found ourselves in a tower room at the Old England Hotel & Spa in Bowness-on-Windermere as the gales battered the windows while raindrops like bullets sought out every crack and crevice in the masonry.

The jetties bordering the hotel gardens disappeared under the rising water as the lake was whipped into a white horse stampede; pleasure craft were secured; the lake’s famous cruisers ceased to run – such was the ferocity of the storm. We felt smug in our spacious room, survivors with a tale to tell back home.

But surprised? No, not at all. I don’t care what the weatherman says, when you visit the Lakes, you pack your waterproofs. Every time.

This is cagoule country. The Macdonald Old England Hotel & Spa is the grande dame of Bowness, a sturdy Georgian mansion beside the lake, with requisite views from many of the 106 rooms, and from the restaurant and terrace bar.

In better weather, the gardens must be inviting and there’s an expansive sun terrace where you can sip summer cocktails with little umbrellas rather than the industrial-strength rain protection required by Ciara.

Rooms are unashamedly old-fashioned, although a recent refurbishment has brought many of them up to date.

And here’s a tip. Ask for Room 224 when booking. It’s huge – almost a suite without the price tag – with a big bed, sofa, armchairs, writing desk and chair, long coffee table and thoroughly modern en suite with monsoon shower. 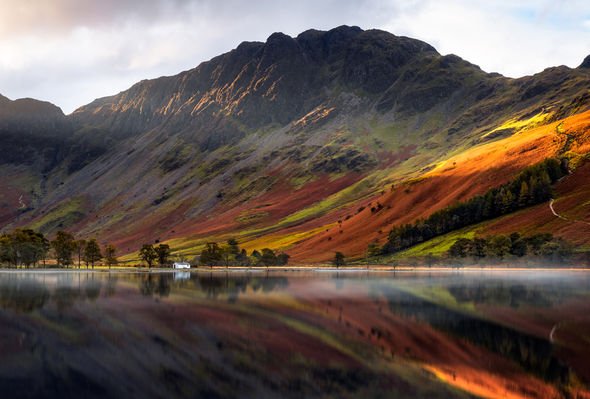 There are tea and coffee-making facilities, fresh milk, wall-mounted large screen TV, free wifi, crystal glasses, USB chargers, ironing board and windows on two sides, offering views up and down the lake.

We could happily have stayed in the room all weekend watching Ciara visit her worst upon Windermere. But, like the Lake District itself, we’re made of sterner stuff and, besides, there’s plenty to do on the hotel’s doorstep.

Just walking in the wind and rain can be a joy if you’re prepared for it, and an amble through town, past all the anorak and umbrella shops, throws up surprises.

Just 100 yards or so from the hotel, The World Of Beatrix Potter celebrates the Lakes author’s adventures of Peter Rabbit and his pals – timeless tales that continue to enthral young children.

And while the stories are gently old-school (albeit with the occasional glimpse of malice in wonderland), the family attraction is anything but.

Clever use of light and sound makes a warren of rooms much more than it actually is. 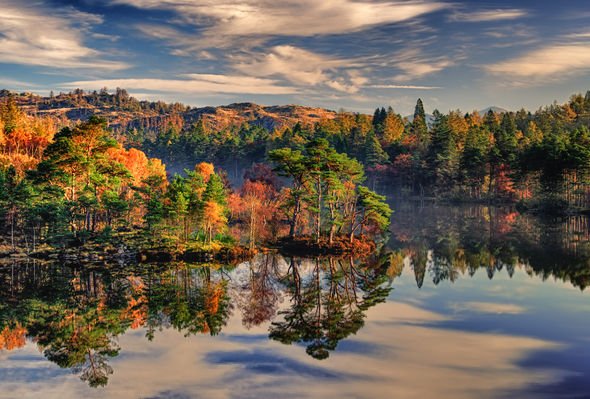 You’re never quite sure what’s around the corner, with traditional tableaux rubbing shoulders with interactive fun.

It’s such a clever use of space that the designers must have worked on Doctor Who’s Tardis too.

Partway along the trail – allow around 45 minutes for your visit – you can step outside into the Peter Rabbit Garden, a small but lovingly planted real-life kitchen garden straight from the books.

It’s not all for show – produce is used to create dishes in the family-friendly character cafe – and you’ll need more than one visit to spot all the little references to the books hidden among the fruit, veg, herbs and flowers.

Designed by Chelsea Flower Show gold medallist Richard Lucas, the garden clings to the side of the attraction and is crafted from local materials such as Honister slate
and Furness bricks.

But, like the garden, there’s more to it than at first meets the eye.

Look carefully and you’ll spot characters from every single one of Potter’s 23 tales, a depiction of her lakeland home and the mysterious code she used in her personal diary.

Almost next door you’ll find another cuddly character, this one a tribute to Lake District ingenuity and determination. It’s Herdy the sheep, a firm favourite for visitors from around the globe who flock to his home.

Inside a Scandi-style shop are Herdies galore – on mugs, plates, tea sets, umbrellas and much more.

The Herdy Company was born in 2007 in Kendal, created by designers Spencer and Diane Hannah to offer visitors to the Lake District and locals a choice of responsibly produced, high-quality giftware. 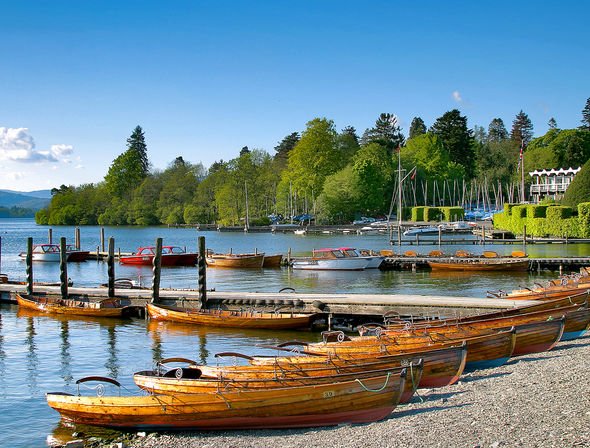 “Herdy launched amidst the second outbreak of foot and mouth at the Westmorland County show,” says Spencer.

“We were hoping for thousands of visitors, but instead we launched among empty pens due to an outbreak of foot and mouth disease.

“This wasn’t the event we’d dreamed of and it did make us very nervous about what we’d done. But despite the lack of visitors, those who did turn up liked our products.”

He need not have worried. Word spread and from just an operation based in a shack, the company now has four shops and worldwide exports online.

There’s also a charity, Herdyfund, which not only offers financial support but also brings together the community to back upland fell farming.

Herdy himself is named after the region’s famous Herdwick sheep and, to bring things full circle, Beatrix Potter herself was a champion Herdwick breeder.

Spencer and Diane keep things fresh, by the way – since Covid, Herdy smile face masks have been added to the range.

There’s wildlife of a different kind some 20 minutes away by car, or by ferry, at the Lakes Aquarium, which boasts Britain’s largest collection of freshwater fish among many exhibits, some of which can be viewed in their natural surrounds from a transparent tunnel.

But we were saving that for another day. We had an appointment with afternoon tea back at the Old England, which has made the tasty treat something of a specialty with sweet and sour options on offer.

Take a window seat in the terrace bar, sit back and watch the world go by. 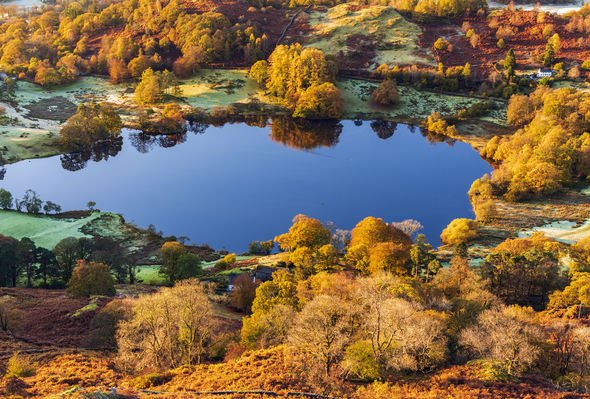 It’s £32 for two, or you can add fizz for another tenner. Come rain or shine, it’s a relaxing self-indulgent hour like few others in the Lakes.

The hotel restaurant offers a menu majoring on local produce without breaking the bank.

There’s a modest gym, a pool and a spa offering treatments if you want to really pull out the pamper stops, but check for Covid restrictions.

As we prepared to check out, the weatherman was getting excited again. A check online revealed that all the roads bar one out of Bowness were blocked by flooding or fallen trees. Sadly, the open road was our route home.

Thanks, Ciara, for a memorable weekend. If only you’d managed to close the road south too, we would have stayed put for some more Lake District hospitality. 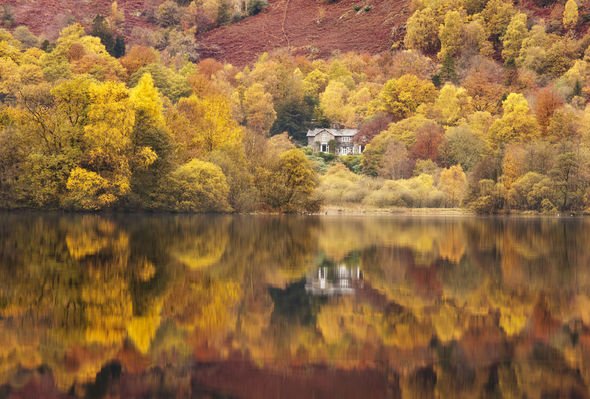 Autumn and winter breaks at the Old England Hotel & Spa in Bowness-on-Windermere, Lake District, start at £195 a night on B&B. macdonaldhotels.co.uk/oldengland 01539 487894.