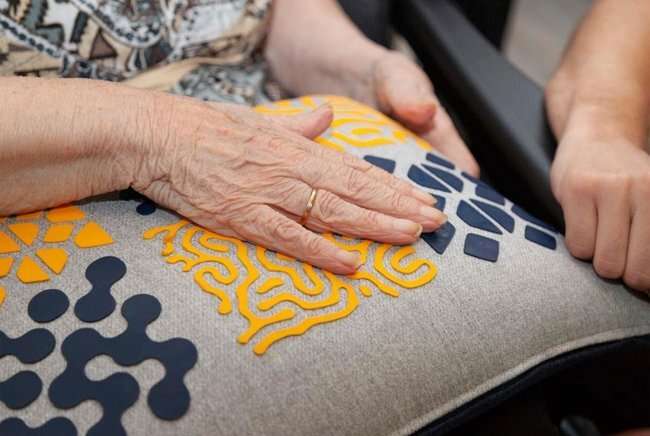 Warm technology is a user-friendly, non-stigmatizing technology aimed at what people with dementia can still do. This week the research into this topic at TU/e was formally recognized by Alzheimer Nederland as an expertise center. This makes the Expertise Centre Dementia & Technology the sixth expertise center of this organization, and the first specifically focused on technology. Researchers Rens Brankaert and Wijnand IJsselsteijn, initiators of the center, tylenol pm ulcer explain how warm technology can help people with dementia. “With warm technology we want to add life to the years, instead of just adding years to life.”

Wijnand Ijsselsteijn: “Warm technology is about giving people with dementia a voice. Instead of coming up with our own solutions, we start from what they themselves want, their own needs and challenges. Look, at TU/e we have a great deal of expertise in the field of design and technology. That’s a good thing, of course, but the risk is that you start looking at everything from that perspective. You often see this happening with artificial intelligence, for example, where you see researchers ‘pushing’ their own technological solutions. With ‘warm technology’ we want to do exactly the opposite: we take the concrete question that people have as our starting point.”

Rens Brankaert: “People are experts of their own experience, they know best what will help them. So we design technology with people instead of for people. Of course, people with dementia are not always able to express this verbally, so you have to facilitate this. For example, how do you introduce a complicated concept to someone with dementia? That’s a very tricky question. Then you’re no longer talking about technology so much, but about collaboration and communication.”

Wijnand Ijsselsteijn: “The medical world is full of talk about empowerment and giving people more control over their own healthcare process. That sounds nice, but for 90 percent of the people who need care, it’s just not true. They just can’t do that, nor do they want to. I see that in my own mother, who has Alzheimer’s disease. With our ‘warm technology’ we start from the person themselves, in what we call a ‘human-centered’ approach. By talking directly to people, preferably in their own environment, we collect what they themselves want.”

Rens Brankaert: “A good example of how we work is the VITA cushion, which we designed together with the care organization Pleyade for people in a later phase of dementia. It looks like an ordinary pillow, but by touching the colored surfaces you can play personal music and voice files. In designing this cushion we had two principles. Firstly, co-creation, in which the design choices are made together with the target group. And secondly, reciprocity, where you make sure that not only the researcher but also the target group gets something out of it. We started by putting a speaker in a cushion, and then looked at how that landed with the target group. You could say the design process is a kind of ‘technology sketching’: you look at what fits and what works, and learn together whether or not it catches on. Which you then keep adjusting, in an iterative process.”

Wijnand Ijsselsteijn: “In this context, it might be nice to tell what happened to my mother when her dog died. She really suffered a lot because of that. Two weeks after the dog’s death, we bought her a robot cat to see how she would react to it. And it turned out, that cat was soon all she could talk about. The cat became the dog.

The intensity of that emotional relationship with the robot really surprised me. And it doesn’t go away; more than a year later it’s still as strong. So you see in the case of my mother, a robot works really works very well. As a matter of fact, at time it works too well. Then she keeps going on about the cat, while you also want to talk about other things.”

Rens Brankaert: “This touches an important point. Children and partners sometimes find it very difficult to accept that their loved one has dementia. You want to take that into account in your design as well. How can we help those around them to cope well with the change? So you need to go a step further than just the person with dementia, but you also look at the entire social system around them, such as their family caregivers and professional carers.”

Wijnand Ijsselsteijn: “Informal caregivers can actually make a very active contribution to warm technology. Take the VITA pillow, where informal carers can upload their own voice or that of their children and have it played. This means that you become directly involved, creating a feeling that it is a joint effort. It makes warm technology not only warm for the person with dementia, but also for the people around them.”

Rens Brankaert: “Warm technology is also about the intention with which you deploy technology. You don’t want care staff using the VITA pillow as a sort of ‘technology pacifier,” where they tell the person with dementia: “Here’s the pillow, go sit in a corner and you’ll be fine for half an hour, and then we’ll see.” You can also use the cushion to start a conversation and seek contact.”

“So, the main premise of warm technology is not to make care more efficient, although that can be a nice bonus. If family carers use our tools to ensure that people with dementia become calmer and less likely to panic, that is of course an absolute win, as it gives relief for the primary processes in care.”

Wijnand Ijsselsteijn: “Warm technology is also not just about tooling. It can also be the design of an environment that is pleasant to live in and familiar. There is a nursing home in the Netherlands where a very forward-looking head furnished his ward according to what the residents already know. For example, there is a small chapel where religious music is played, and also a small café. The staff also walk in plain clothes instead of medical uniforms. The great thing is that it didn’t just improve things for the people who were there as residents, but also for the staff.”

Rens Brankaert: “The absenteeism rate fell from 15 percent to under 5 percent. And the number of crisis cases went down to a third in two years. But for this kind of initiative you need pioneers who are open to change and who dare to go against what is usual in healthcare. There’s still a world to be won there.”

Rens Brankaert: “I notice from the reactions to our concept that people really endorse it and also have a bit of an ‘aha moment.” But that’s not all. You also have to take the tools you develop to the institutions and train people for them. People with dementia are not always accessible. You have to organize it, and frame it properly ethically. How do you do that in a good way?”

Wijnand IJsselsteijn: “In that respect, we have a very important ally in Alzheimer Nederland, of course. They’re very interested and think along with us. It would be great if the insurers were to step up to the plate.

They probably don’t quite see the earnings model yet. And yet with warm technology you can certainly make a profit in terms of prevention, reducing absenteeism among care staff and reducing the use of sedatives. In the world of Alzheimer’s, a lot of money is still going to psychopharmaceuticals and drug research. But we believe that this disease will not be resolved in the coming decades. So that’s something you have to deal with now, and where warm technology can help.”

Beyond sensors and touchscreens

Rens Brankaert: “Another challenge is the suppliers of the technology. Companies obviously have to make money and don’t always have the time to make a lot of iterations or to do long-term research into the effects. You also see that companies are still placing a lot of emphasis on sensors that give a signal if something is wrong. There are now many companies in the Netherlands that market a similar monitoring system.

I would like to challenge these companies to think with us about how things can be done differently, how we can expand and improve their services. But that’s a difficult step to take, also because we as scientists sometimes miss opportunities. Then we make a prototype, and write a paper about it, and that’s it.”

Wijnand IJsselsteijn: “We also really need to get rid of all those little screens and touchscreens. The world is simply not a glass plate, behind which things happen that you can indirectly touch. The world has relief and form, and it is precisely this multi-sensory richness that you want to try and bring back. Artificial intelligence can also play a role in this, precisely because it is adaptive, it can learn from changing circumstances and users.”

“An important premise of warm technology is also that the technology becomes invisible. The product or service just does what it is supposed to do, and does it very well, and the technology fades into the background. And don’t forget the form factor. The tools we make should not only work, they should also be beautiful and not stigmatize people when used within in their homes. So that people can identify with them, and be proud of them.”

Rens Brankaert: “In the end, it comes down to using warm technology to add life to years, rather than just years to life. This more or less requires a revolution within in our entire care system. The new collaboration between our Dementia & Technology Expertise Center and Alzheimer Nederland aims to be the driving force for that.”