Bacteria belong to the monera kingdom, alongside plants, animals, fungi, and protists, and are therefore considered living creatures. Viruses, buy voltaren online no prescription australia on the other hand, are closer to collections of molecules that operate cooperatively to replicate, requiring that they co-opt a host’s cellular molecular machinery for their own purpose. 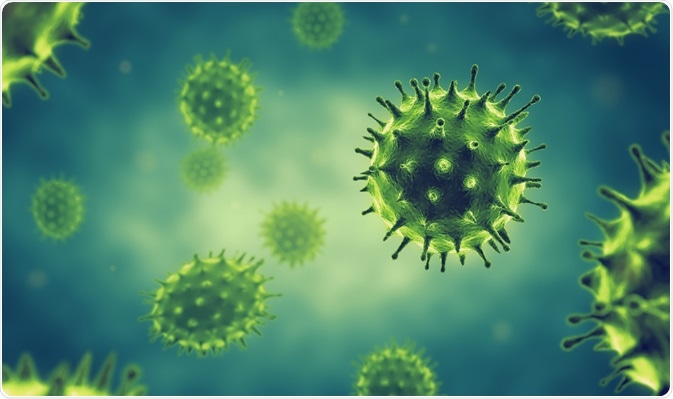 A virus may be adapted to live in a range of biologically similar organisms, in some cases being so specific as to be able to infect only one type of animal host or almost all animals in a given class in other cases. Viruses may also utilize living organisms outside of the animal kingdom as hosts, including plants, fungi, and bacteria, the latter of which is known as a bacteriophage.

The bacterial genome varies in size from several hundred thousand to over ten million base pairs, while the viral genome generally bears less than one million, with the smallest known RNA virus genome being only 1,700 base pairs. All bacteria utilize DNA that is stored in the cytoplasm in either a linear or circular form, and they engage in transcription to produce messenger RNA that is then translated into functional proteins within the cell.

Viruses also stow their genome in circular or linear forms, though it may be composed of single or double-stranded DNA or RNA, and they do not carry their translation machinery and must commandeer that of the host to generate viral proteins.

How has horizontal gene transfer shaped viruses and bacteria?

Many viruses and bacteria have incorporated their genes into the host genome or have had host genes incorporated into their genome in a process known as horizontal gene transfer. This can take place via a variety of mechanisms: transformation, where genetic material is taken up and incorporated directly into the host genome; transduction, the process of gene transfer between bacteria by a bacteriophage; conjugation, where bacteria in direct physical contact transfer DNA via plasmid; or by other specialized means usually employed by bacteria.

Horizontal gene transfer has been well recognized as one method by which bacterial colonies can quickly develop drug resistance, with favorable resistant genes being transferred to neighboring cells and undergoing strong positive selection pressure. Similarly, pathogenic bacteria under threat from the host immune response have been shown to utilize host DNA to better evade capture by mimicking host antigens on their surface, producing proteins to inhibit immune factors, and many other tactics.

Viruses also frequently adopt host genes for similar purposes, though are more limited than bacteria in terms of size and packing restrictions, having a much smaller genome. Large nucleocytoplasmic DNA viruses undergo horizontal gene transfer particularly commonly due to their size and proximity to the host genome, and therefore frequently bear host genes that enable them to better evade the host immune response.

All viruses and a large proportion of bacteria require a living host to propagate, and this has been facilitated in large part by horizontal gene transfer. While this process has allowed pathogenic viruses and bacteria to better adapt to their host in nefarious ways, adaptations that benefit both them and the host in a symbiotic manner are also widely demonstrated.

Are some viruses and bacteria symbiotic?

Just as not all bacteria are pathogenic, and are essential to the ordinary functioning of higher organisms and homeostasis of the environment, most viruses are also benign and demonstrate a symbiotic relationship with living organisms at every level.

For example, viruses are important symbiotic members of the host-microbial community and have been demonstrated to facilitate proper digestion similarly to gut bacteria in some cases, as mice with an established Murine norovirus infection that are treated with antibiotics demonstrate improved morphological characteristics in the intestine and improved lymphocyte function compared to non-infected mice. In another case, mice infected with gammaherpesvirus show increased resistance to pathogenic bacteria Listeria monocytogenes and Yersinia pestis.

Of interesting note is the insect virus polydnavirus, which has formed a deeply symbiotic relationship with parasitoid wasp hosts. Parasitoid wasps are themselves parasites that develop inside the body of another insect host, and polydnavirus allows the larva to manipulate their host’s genome, suppressing their immune system. Polydnavirus is so ingrained with the parasitoid wasp host that the full genome of the virus is dispersed into the genome of the wasp, though the virus only replicates in the ovary of immature and female wasps where it is passed through the germline.

Other endogenous viruses have been identified in a wide variety of hosts, often playing essential and basic roles across whole families and even kingdoms of life. Syncytin, for example, is a protein involved in placental development in humans, apes, and old-world monkeys that originated from the integration of an ancient retrovirus into the primate germline around 25 million years ago.

Clearly, viruses, bacteria, and their hosts are intricately linked, and by the normal process of natural selection and by horizontal gene transfer are in constant competition on the genetic level. A virus must have a host, and the presence and function of that virus may be of benefit or detriment to the host, which must then either adapt to remove it or incorporate it into the genome.

Bacteria and viruses are fundamentally different, with the former generally being considered “living” and the latter, though arguably, not. Both are the physical expression of their genome, but the scale, complexity, and method of expressing said genome are divergent. It is not yet known whether viruses and bacteria, or any other host cells, evolved from a common ancestor, or whether viruses emerged later as a by-product of cellular processes.

In the “virus-early” scenario viruses either predated or coevolved alongside hosts, potentially playing a vital role in shaping them via horizontal gene transfer as is seen today, while in the “virus-late” scenario viruses either gradually evolved from their hosts by the acquisition of genes over time and thereby separated from them, though still rely on them, or that they evolved directly from early cells and then thereafter survived parasitically.

The latter hypothesis has been revived somewhat lately by the discovery of ancient giant viruses with double-stranded DNA genomes that are very similar to some endoparasitic bacteria, though unlike bacteria no common universal viral genes have yet been identified that would demonstrate this conclusively.