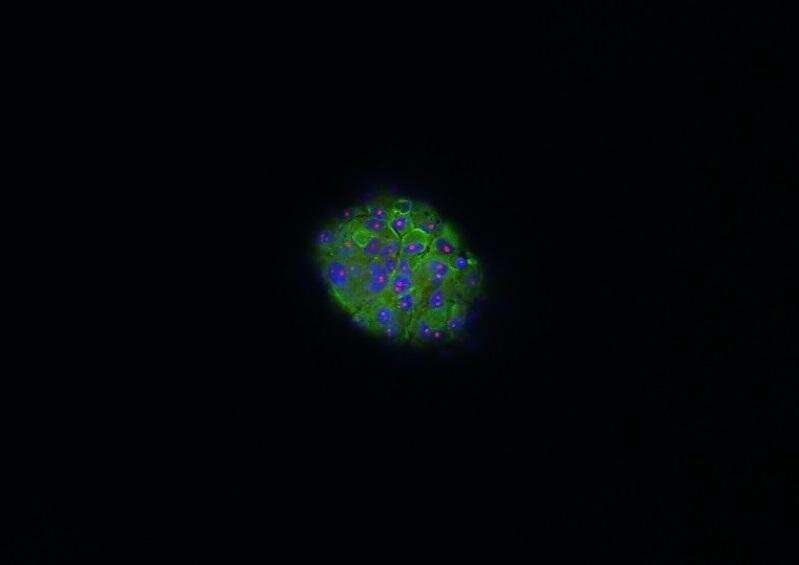 A research breakthrough shows that a simple blood test could reduce, or in some cases replace, the need for intrusive surgery when determining the best course of treatment for patients with a specific type of brain tumor.

Researchers at the Brain Tumor Research Center of Excellence at the University of Plymouth have discovered a biomarker which helps to distinguish whether meningioma—the most common form of adult primary brain tumor—is grade I or grade II.

The grading is significant because lower grade tumors can sometimes remain dormant for long periods, not requiring high risk surgery or harsh treatments such as radiotherapy and chemotherapy. Tumors classified as grade II can progress to become cancerous and more aggressive treatment may be needed in order to try to control their spread.

At the moment, meningioma patients are usually put on watch and wait, undergo radiotherapy or have surgery in an attempt to remove the tumor. Between 70 and 85% of meningioma cases are lower grade so, if the blood test—or liquid biopsy—is carried out these patients may well be spared surgery or radiotherapy.

The team at Plymouth, led by Professor Oliver Hanemann, has published its work on this novel biomarker known as the protein Fibulin-2 (FBLN2) in the International Journal of Molecular Sciences. FBLN2 has not previously been shown to play a role in meningioma development, problems with taking nexium although it has been linked to other types of cancer such as forms in the lung, liver, breast and pancreas. The team therefore believes that this study is the first to link the FBLN2 protein as a biomarker for meningioma.

Using tumor samples, cancer cells grown in the laboratory and liquid biopsies from patients, the scientists were able to distinguish grade I from grade II tumors. In a smaller sub-study, the researchers have shown that levels of the biomarker could differentiate between good (slower growing) and bad (faster growing) grade tumors as defined by genetic make-up.