Valentine’s Day has always been the worst, in my mind. Now that I’m a single mom, I’m even less of a fan.

It started in eighth grade at Tillicum Middle School in Bellevue, Washington. Every year, the class fundraising committee sold candy-grams to raise money for the spring dance. The folded-up pieces of paper would be delivered to your homeroom with a lollipop or candy heart attached. As the non-popular kid who often hid in the bathroom reading during lunch, generic rimonabant uk without prescription I knew I wouldn’t be getting one.

So when the class president, all shiny hair and boobs that had developed before any of the rest of ours, dropped a candy-gram at my desk, my heart leaped in surprise and hope. It was, of course, a cruel prank that could have been fodder for a ’90s teen romance, which was confirmed when I saw the leaders of the mean girls glancing over at me and laughing. My obvious crush on the school jock hadn’t gone unnoticed.

The next year on Valentine’s Day, I wore all black — down to my Docs — and told everyone that the holiday was a con made up to sell people candy. But my heart always harbored the secret hope that one day, I’d have a real valentine.

When I got married, I had visions of flowers and fancy restaurants and everything I’d pretended to despise. I learned the hard way that inattention and last-minute plans can hurt worse than fake candy-grams.

It’s almost better to be ignored than to have someone come home and ask if you got a babysitter the day before the holiday. Better to be ignored than to ask hopefully whether he got you a Valentine’s Day card — even though you already know the answer is no. In the beginning of the relationship, I carefully selected every card and picked out presents I thought would be appreciated. After a while, I gave up.

Turns out, you can have a valentine and still have a bad Valentine’s Day.

But now, I’ve been a single mom for over four years. I’ve only had one boyfriend during that time. Cautious after past experiences, I bought him a card and wished him happy Valentine’s Day … on Twitter. I used to wear my heart on my sleeve. Now, I’ve unpinned it and tucked it carefully into my pocket.

Valentine’s Day is tough for single parents. It’s hard to endure a month of hearts and candy and reminders not to forget this day — you know, the day when your slightly fancier-than-usual dinner will be heated up (in the microwave, as usual). We try to celebrate it as an expression of all love, buying sweet Valentine’s Day gifts for our children, but we know that’s not what it’s really about. And because V-Day isn’t really a major holiday, it’s not included in most custody holiday schedules. This year, it’s just a regular Thursday according to the divorce overlords. And I won’t have my son that day this year; I’ll be alone. Without him, there’s no reason to celebrate at all. 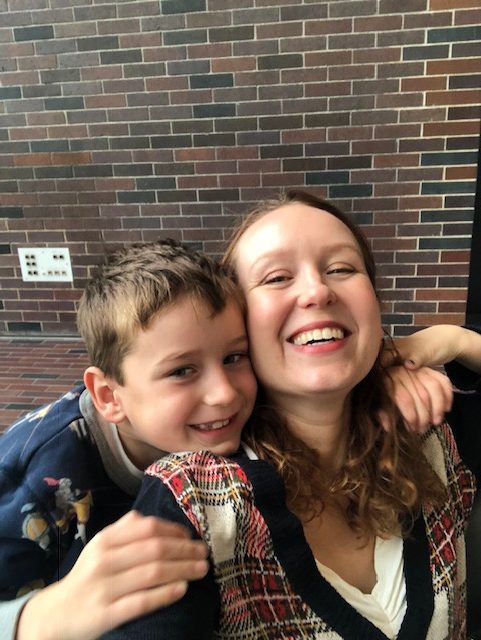 Buying flowers for myself got old about a year after the divorce was final, and going out to dinner on days when the restaurants will be filled with happy couples never ends well. I know plenty of single moms who struggle to stay positive, keep going and look on the bright side every day of the year, not just this one. But on this holiday — while taking care of kids, making dinner, supervising homework, and bearing the weight of a messy divorce and rough post-divorce dating scene — it feels particularly heavy.

To someone who’s managing it all on her own, risking pain for candy hearts and an overpriced bouquet can be a fool’s bargain. Or so we tell ourselves, trying to stamp out that last flicker of hope.

The reality is that, despite my all-black boycott during junior high, I still held onto my dreams of love. It was a façade to cover up how hurt I’d been — just like so many of us single parents who know we don’t need a partner deny that we might really want one. Sometimes we cling to bitterness and pain because it’s damned scary to think of loving again.

But the path of avoiding connection out of fear of being hurt leads to spending your lunch period in a bathroom stall sitting on a toilet tank — with your Doc Martins up on a toilet seat so the hall monitor won’t catch you — trying not to fall in while reading Anaïs Nin. So there’s that.

In the midst of managing the single mom life, Valentine’s Day may slip by as a day like any other. It honestly might be better that way. Even if you have to spend a day studiously ignoring the office decorations, I’d advise you not to cling to the hurt. Keep that last flicker of hope alive. If love was worth believing in when you were 13, it’s still worth believing in now.

That day in class, I made eye contact with the ringleader, closed the candy-gram with the fake signature, stood up and dropped it on her desk. I never let her see me cry. You can’t always stop people from being mean, but you don’t have to let them win.

I’m a child of the ’90s, and when it comes to love, I don’t think we ever leave our teens behind. The year before that fateful Valentine’s Day, Pearl Jam released the song “Black,” sung from the viewpoint of a man who lost his lover. When listened to from that perspective, it’s sad. But the final few lines, “I know someday you’ll have a beautiful life / I know you’ll be a star / in somebody else’s sky,” have always given me hope.

Yeah, I’m single on Valentine’s Day. But someday, I’ll be a star in somebody else’s sky. And to all the other single parents out there, I promise: so will you.

An earlier version of this story was published in February 2019.

Spread the love by sharing these great kids books by Black authors and illustrators.