An epidermal nevus is formed of skin cells which proliferate abnormally in a noncancerous way, to produce a benign overgrowth in the outer layer of skin. It is usually present at birth, or is seen in early childhood.

There may be one or more in the same individual. These lesions may be considered to be hamartomas of the ectodermal cells, which accounts for linked defects in other systems of ectodermal origin, such as the eye, buspar frequent bowel movement the brain, and the skeleton in one of three patients with this condition. 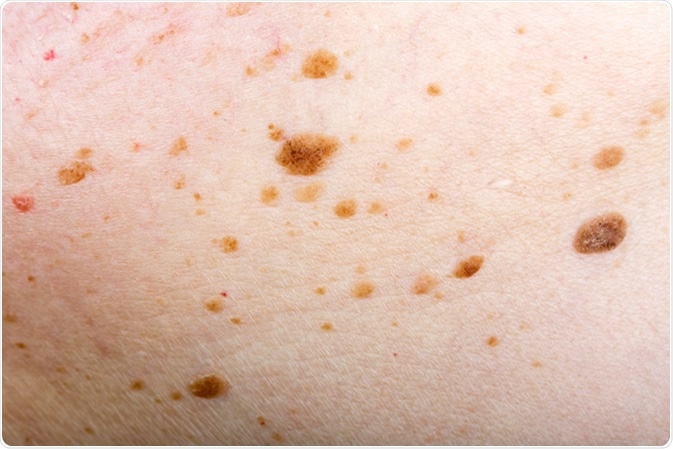 There are different types of epidermal nevi, depending on the type of cell that overgrows.

Keratinocytic epidermal nevi are made up of keratinocytes alone, which comprise the outermost skin layer. They occur only on the limbs and more commonly the body. Only a few occur on the face or the scalp. They appear to be flat brownish patches of skin or raised velvety plaques. With time, they may thicken and darken as well as becoming warty on the surface. In addition, they may spread over a somewhat larger area for the first few years. They may be known as verrucous or linear epidermal nevi depending on their appearance.

Linear epidermal nevi are called so because they appear to form a line. Their course follows the skin lines known as the lines of Blaschko. These are invisible patterns thought to be the paths followed by fetal epidermal cells.

Other types of non-organoid epidermal nevi include:

These nevi are made up of other or adnexal epidermal cells such as those in hair follicles, sweat glands, or sebaceous glands.

Some people have one epidermal nevus, while others have both a nevus and other systemic abnormalities, such as problems with the eyes, brain, or bones. The latter group of conditions is called the epidermal nevus syndrome.

Certain mutations have been found to occur in individuals affected by epidermal nevi. These include mutations in the FGFR3 and PIK3CA genes mostly. Since these mutations are not transmitted by the parents but are present in the body cells, they have occurred after conception, and are called somatic mutations. They are present in 40 percent of the keratinocytic type of epidermal nevus.

In most affected individuals, the epidermal nevi remain stable throughout life and are usually asymptomatic. In a few cases it may give rise to a tumor, either benign, such as the syringocystadenoma papilliferum, or malignant, including squamous cell or basal cell skin carcinoma.

For this reason, any lump or ulcerative change within an epidermal nevus should be assessed by a dermatologist. It may be wise to have an excision biopsy done.

Since most epidermal nevi are harmless, they are usually left alone. In some cases, when the growth is too warty or unsightly, topical use of calcipotriol may help shrink the rough surface. Laser ablation or surgical excision is recommended if the lesion should be removed.