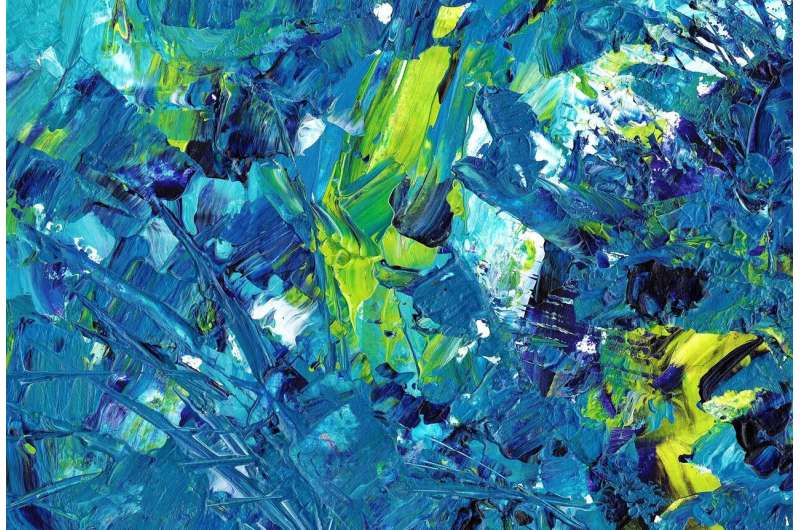 For many years, neuroscientists worldwide have been trying to understand the neural and cognitive processes underpinning artistic expression. While past findings have identified a number of brain areas that could be associated with the creation of different forms of art, burning calcium carbonate scientists have yet to attain a full and comprehensive picture of the neural processes behind artistic cognition.

Researchers at the Lyon Neuroscience Research Center (CRNL) have recently carried out a study aimed at putting the known pieces of this puzzle together by reviewing past studies investigating the neural processes behind artistic cognition. Their paper, published by MIT Press in the journal Leonardo, provides valuable new insight about the role that competitive brain processes could play in artistic cognition.

Over the past two decades, the human understanding of the brain has changed significantly, and neuroscientists have started viewing it as an ecosystem. This ecosystem is composed of processes that either cooperate or compete with each other.

“Competition between brain processes leads to fascinating dynamic interactions that can explain many cognitive performances, such as learning, memory and many real-life observations,” Dezso Nemeth, one of the researchers who carried out the study, told Medical Xpress. “In line with this new outlook on the brain, we can better understand how we are able to perceive, see and represent the world around us. One of the key functions discussed in our paper is implicit learning, which is closely related to intuition.”

In their paper, Nemeth and his colleagues took a first step toward understanding artistic cognition from a cognitive neuroscience perspective. Their main objective was to understand how the human brain deals with art and how an artist’s brain perceives the world, builds representations and uses neural processes related to intuition. In psychology, the term intuition refers to the human ability to understand or examine something instinctively, without consciously reasoning about it.

“Our paper is a theoretical instigation in which we connected the results of past empirical studies in cognitive neuroscience, particularly those focusing on artistic cognition,” Nemeth explained. “Ultimately, we sought to explain the role of implicit learning processes in artistic cognition, or how the competition between different brain networks can lead to a more effective artistic intuition.”

After reviewing past papers related to artistic cognition, Nemeth and his colleagues introduced the idea that when it comes to producing art, “less is more.” More specifically, they suggested that “weaker” prefrontal circuits, which are related to executive functions (i.e., cognitive processes that allow humans to control their behavior and focus on a task at hand, such as working memory and flexible thinking), can actually lead to more effective artistic cognition. The researchers refer to this phenomenon as the Andras effect.

“For example, if a photographer can tune down her control functions and access to long-term memories, she can perceive a ‘different world’; a world without expectations or past memories,” Nemeth said. “We can call this intuitive photography.”

In their paper, Nemeth and his colleagues introduce a new way of thinking about artistic cognition from a neuroscientific standpoint. While the ideas they presented are fascinating, so far, they are merely theoretical and based on past observations. In the future, the researchers would like to conduct investigations aimed at confirming their hypotheses and gathering empirical evidence for what they refer to as the Andras effect.