Pick-your-own farms often get filed under “summer days out”, but many run on into autumn and winter, offering plums and damsons in September, apples, pumpkins and sloes in October, and fir trees and Brussels sprouts on the stalk in the run-up to Christmas. Here are some of the best places across the UK for PYO crops. 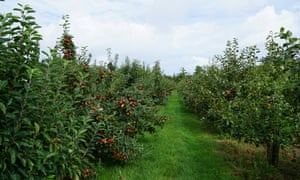 This north Norfolk farm shop is popular year round for its local produce and cluster of other small shops and businesses (among them Eric’s pizza and Eric’s fish and chips). Drove shines a bit brighter each autumn, however, when its 16 hectares of orchards start delivering fruit. More than 160 varieties of apple and pear are grown here (later on these will include Norfolk Royal Russet, but look out now for Pitmaston Pineapple, Ellison’s Orange, D’Arcy Spice, Sturmer Pippin and Norfolk Beefing). Many are available ready-picked as well as PYO. Also worth seeking out are single-variety juices and ciders made from the orchard’s apples and quinces.
• PYO open 10am–4pm daily until end of October, booking not necessary but check what’s fruiting before visiting, droveorchards.com 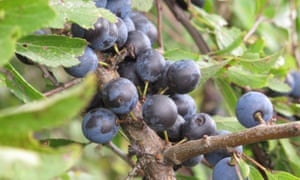 “We manage our hedges for maximum yield of wildlife and berries for preserves,” say David Lamboll and Lori Reich of their sustainably managed West Country farm between Newton Abbot and Teignmouth. As well as selling Lori’s preservesat the village post office and local farmers’ markets, and running preserving courses, the couple also sell ready-picked farm produce on site and manage an extensive PYO operation. Autumn raspberries, sweetcorn and runner beans should be available until the end of October, joined soon by pumpkins. For sloe gin fans, this is also one of the few farms in the UK where you can pick your own sloes this month.
• PYO open 11am-5pm daily except rainy days and Mondays, until end of October. Booking not necessary but check the website’s “picking today” page before visiting, shutefruit.co.uk 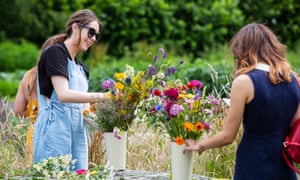 Run by cousins Bek Bibby and Jen Stuart-Smith (the fifth generation of the same family to grow plants on the site), Blooming Green, four miles from Maidstone, is a “no-dig” flower business based in a former Bramley apple orchard. The company sells flowers direct to customers and opens for PYO from summer to the end of October. There are still blooms to snip this month – including dahlias, sunflowers and zinnias. In November and December there are wreath-making workshops, where participants pick their own foliage – perhaps pittosporum, cotoneaster, holly, euonymus or ornamental rosehips – and can take any leftovers home.
• PYO open 10am–4pm on Saturdays only, with pre-booking of one-hour slots essential this year (from £30), bloominggreenflowers.co.uk 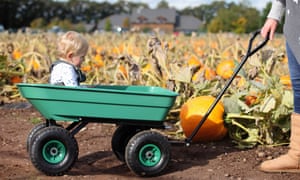 This year, Canalside Farm won a small farm shop of the year award, but those in the know also visit for its PYO. A range of squashes, gourds and pumpkinsare available this month and it’s an integrated business: the pumpkins are also used in dishes at the farm’s cafe and in pumpkin-and-sunflower-seed sourdough loaves on sale in the shop. It’s right alongside the Trent and Mersey canal so visitors can pull up in a canal boat or kayak.
• PYO is open from 10am to 4pm on a series of dates between 10 and 31 October. Pre-bookable tickets cost £2pp with picked pumpkins charged additionally, canalsidefarm.co.uk

Fans of food whose journey can be measured in metres rather than miles might consider this 63-hectare fifth-generation farm. It offers bookable, timed farm passesthat allow visitors to take their pick from whatever’s growing (as well as the requisite pumpkins, current produce includes apples, cauliflowers, onions, red cabbages, French beans, spinach and broccoli). The website offers real-time information on what’s available and a useful map of where to track down crops on this large site.
• Passes available 9am-4pm daily until end of October or early November, £4 adult, £1 child, redeemable against the cost of picked produce, garsons.co.uk 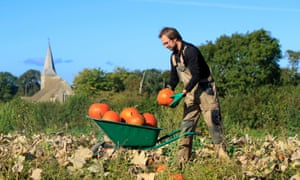 Local consensus has it that where there’s muck there’s brass, but at Spilmans (near Thirsk) where there’s carefully tended soil there are pumpkins. Forty thousand of them were ripe for the picking when this family-run PYO patch opened on 3 October so there should be plenty to go around; choose from traditional pumpkins, gourds, squashes and white ghost pumpkins. Socially distanced family-friendly activities include pumpkin carving, tractor rides and a cannon that blasts cobs of corn 100 metres high. There’s also a farm shop and a takeaway food court serving coffees, wood-fired pizzas, soup, sausage rolls and more.
• PYO open 8am-5pm on selected dates in October and must be booked in advance. price £10 per car, redeemable against activities and purchases (excluding pumpkins, which start at £1, spilmans.co.uk

If you’re struggling to persuade your children of the joy of sprouts and you live near Huntingdon, make your way to the village of Warboys. Here, husband-and-wife team Sam and Anna Johnson do a brisk trade in PYO strawberries in the summer. Later in the year, however, it’s all about cauliflowers and green sprouts on stalks, which are available for PYO one day each December; what isn’t picked then is sold in local farm shops and at farmers’ markets.
• PYO 13 December only, 10am–1pm, no booking necessary, pay only for what you pick, on Facebook 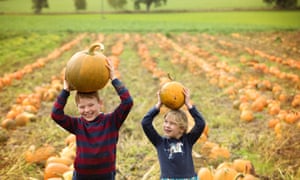 Long before we started growing pumpkins – or celebrating Halloween – the Celts were heralding the coming of winter with Samhain. As with Halloween, the festival was seen as a liminal time when the boundary between the living and the dead was at its most faint. To scare off evil spirits the Celts would light bonfires, the tradition morphing into the carving of jack-o‘-lantern from turnips. The custom still smoulders in parts of Scotland and Ireland so it’s fitting that Arnprior Farm, one of Scotland’s best-known PYO pumpkin operations, also offers dig-your-own turnips (tatties, too) between 12 and 31 October. Food trucks selling wood-fired pizzas and gourmet beef burgers will be on site to help you fuel up after the exertion.
• Entrance is by timed, pre-booked tickets (£6 a car, redeemable against the cost of any picked produce) to manage numbers (check Facebook for returns) and a one-way system will be in place, arnpriorfarm.com 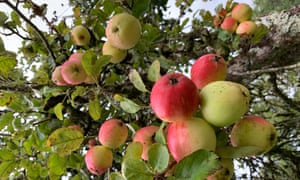 National Trust properties, with their walled gardens and heritage-heavy fruit orchards, are often at the forefront of the annual Apple Day festivities on 21 October. Because of Covid, however, many are putting plans on hold. Instead, several sites are letting visitors pick their own apples in return for donations or small fixed fees. On the shores of Upper Lough Erne, for instance, Crom is hosting an apple-picking weekend over 17-18 October. Visitors can either bring their own container or collect one from the visitor centre, then walk a scenic mile or so to the estate’s Wild Orchard.
• Apple picking 10am–4pm 17 and 18 October. Walk-ups possiblebut booking advised, £5 adult, £2.50 child, NT members free, donations requested for picked fruit, nationaltrust.org.uk 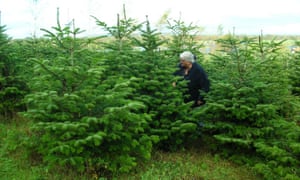 Like many suppliers, Banwell Christmas Trees (near Weston-super-Mare) offers pick-your-own (or, in this case, cut-your-own) Nordmann Firs, as well as a choice of ready-cut trees. Unusually, however, it also offers dig-your-own Christmas trees, meaning you can re-plant your tree after Christmas and avoid sending it to the recycling centre. You can either bring your own saw or spade, buy new ones on site and take them away with you, or borrow the farms’ (sanitised between each use). It’s thirsty work digging up Christmas tree roots but handily Thatchers cider shop is only half a mile away.
• Open 8am-4pm daily between 20 November and 20 December. Pre-booking not necessary but best to call first. Visitors are asked to wear masks, follow social distancing guidelines and bring the correct money in cash (prices are on the website but start at £15 for a 3ft tree), towerbrook-farm

Social-distancing measures are in operation at all these farms, with hand-washing and spacing at pay points and limits on numbers in fields and plots. Pre-booking isn’t always necessary but, as government guidelines continue to change, it’s wise to check in advance of a visit