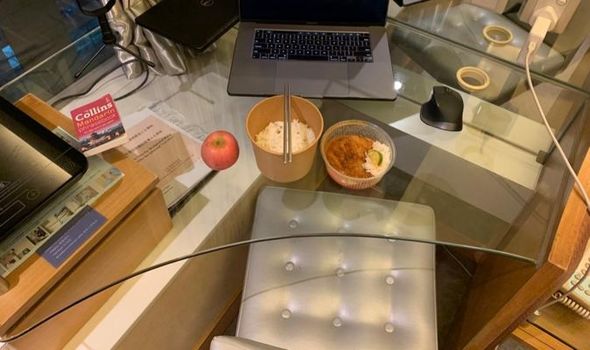 Express.co.uk spoke to a British expat in Hong Kong about his 21 day quarantine experience. Andrew Uden has worked in Hong Kong for just over a year and recently returned to the country after visiting his son abroad.

In Hong Kong quarantine, which lasts between 7- 21 days depending on travel history, travellers aren’t allowed to leave their hotel room for any reason and everything is brought to them by staff.

Travellers must book hotels through the Government website. Booking early is advised as accommodation can be fully booked up to two months in advance.

Andrew told Express.co.uk the three daily meals are delivered on a stool outside guests’ hotel doors in a mass operation.

He said: “It’s like a military operation. They have to rush around to get everyone’s food on the stools which does mean it’s often lukewarm at best.

“In a bizarre way, I am quite glad the food isn’t that appealing because I think one of the things a lot of people do in these circumstances is gorge themselves to counter the boredom.

“I’m trying to avoid middle aged spread so I’m glad I’ve been on a sort of hunger strike while being here.

“That said, the hotel staff work extremely hard to try and please their guests, even to the extent that when they saw that I was a Westerner, they were delivering a lot of Italian style food. And I actually love Cantonese food so I asked for that instead which has been a great improvement for me.”

The only contact Andrew has had in quarantine is with the staff who come in to manage PCR tests for the guests.

He said: “I think there’s about four or five PCR tests done while you’re here and that’s the only contact I’ve had so it’s a bit like doing a strange isolation experiment on yourself.

However, Andrew told Express.co.uk he did have unexpected visitors during his first quarantine experience due to an exploding toilet.

“After I heard unexpected gurgling noises, I realised my toilet was blocking up and quickly spreading onto the floor.

“I hastily erected a dam with the hotel’s snow white towels. The excitement was over quickly as the staff were really great and dealt with the toilet emergency really quickly while I stood in the corner with my mask on.”

Finding a way to exercise in a quarantine hotel room can present a challenge for the cooped up travellers.

Andrew said: “I tend to do step ups from the floor to my bed and then I have to take a break because if you do that for long enough it’s like climbing a mountain! I’m trying to do my 10,000 steps a day by doing that to stay fit.”

British tourists who had to quarantine in a UK Government hotel might be a little jealous of Hong Kong’s quarantine treat system.

Andrew told Express.co.uk: “The hotel has been quite ingenious and a lot of the hotels in Hong Kong are thinking of things like this now.

“They’re trying to give people experiences so there’s a mini shopping mall app where you can choose little treats for yourself.

“So you could treat yourself to a whiskey or a beer if you wanted but you can also rent yoga mats or exercise bikes from the treat shopping mall. A bike is about $150 dollars for the three weeks.

“Some hotels are also running online games between everyone staying in quarantine so there’s a mix of things going on.”

Hong Kong’s quarantine rules might seem strict to many Britons but Andrew says it’s how the country has managed to keep Covid levels low.

He said: “As a lot of the housing here is flats, we do often live on top of each other and there’s also quite an elderly population.

“They’ve also had experience with SARS which was a really bad time where they lost a lot of people.”

SARS or Severe Acute Respiratory Syndrome was a viral disease that impacted Hong Kong in the early 2000s.

Andrew added: “I think they’re doing really well protecting their country and their elderly. They’re catching pretty much everyone coming in with Covid.

“I’m happy to oblige by doing the quarantine as it seems the safest way to protect the population.”