Brooklyn’s first-ever supertall skyscraper reaches its full height of 1,066ft, with ‘unprecedented views’ of New York promised when it opens in 2022

Brooklyn’s first supertall skyscraper has now reached its peak height, with the firms behind it announcing the topping out of the 1,066ft- (324m) tall tower.

The skyscraper – called ‘The Brooklyn Tower’ – is located at 9 Dekalb Avenue and it’s described as an ‘imaginative new building’ that is ‘formed by interlocking hexagons and dramatic cascading setbacks in a facade of shimmering bronzes and deep blacks’.

The companies behind the build are JDS Development Group and Shop Architects, who say the tower is a ‘monumental new residential building with unprecedented views’. 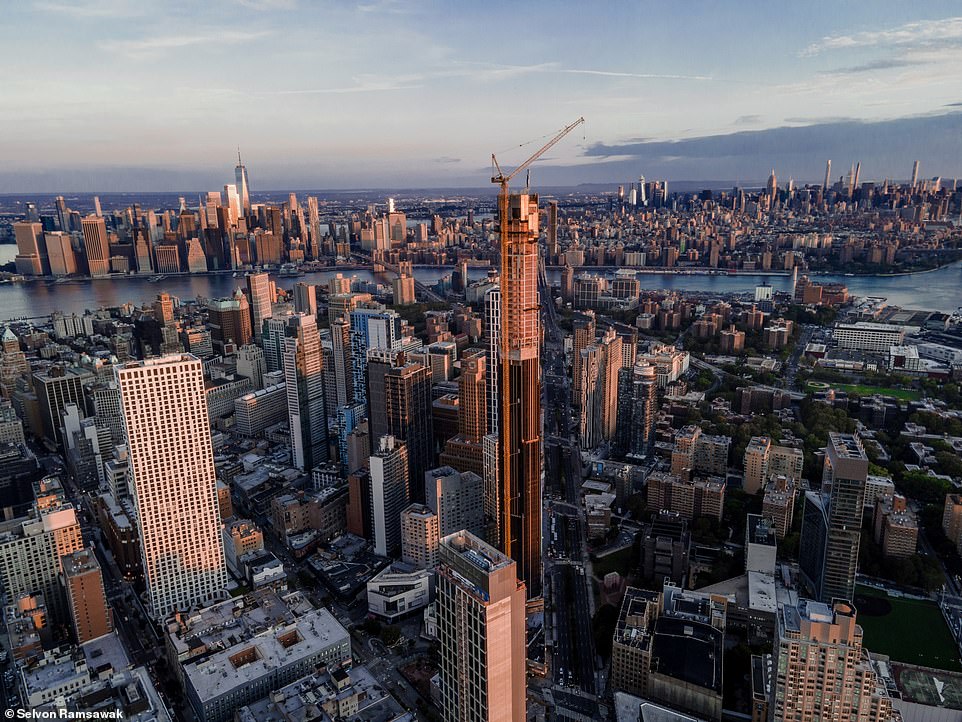 Pictured above is Brooklyn’s first supertall skyscraper, The Brooklyn Tower, which has now reached its peak height of 1,066ft (324m) 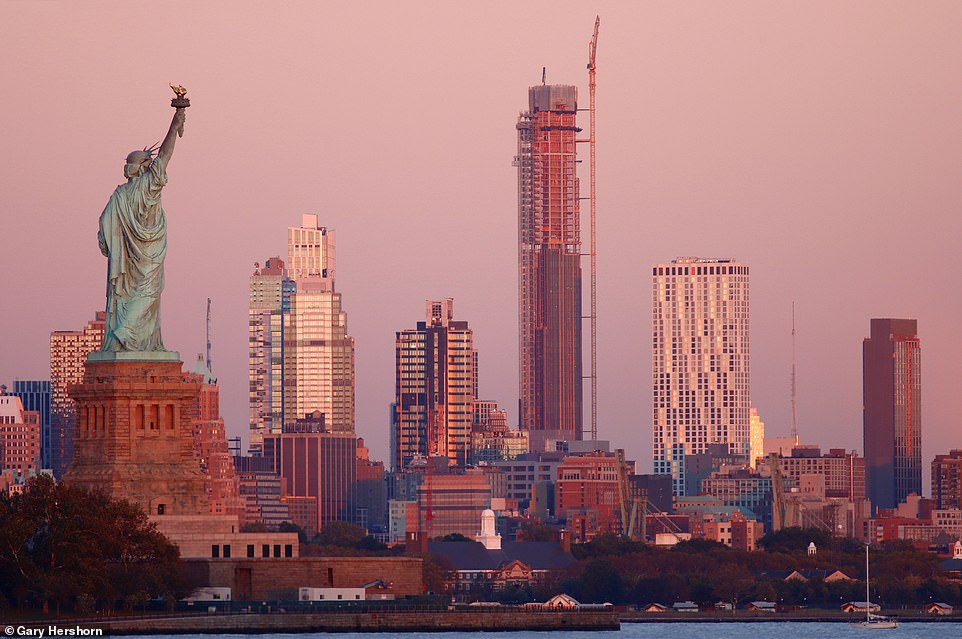 The landmark skyscraper, pictured centre-right, is described as an ‘imaginative new building’ 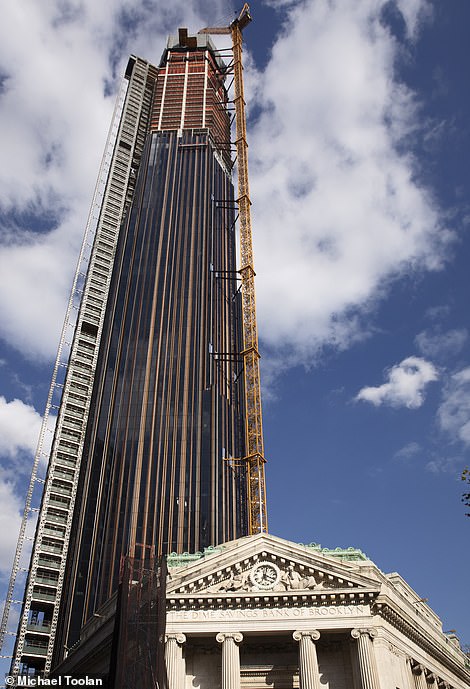 The 93-storey behemoth, which has been under construction since 2018, will offer views across the borough of Brooklyn and beyond, to the Manhattan skyline, the East River, and the Statue of Liberty.

It’s located in Downtown Brooklyn, near the likes of the Dumbo neighbourhood, the Brooklyn Art Museum, and the Barclays Center, home to the Brooklyn Nets basketball team.

The historic Dime Savings Bank of Brooklyn, ‘where locals could once open a savings account for as little as a dime’, is connected to the skyscraper at its base.

The ‘hexagonal patterning’ of the bank’s design informed the geometric exterior of the skyscraper.

According to a statement, the ‘distinctive materiality of The Brooklyn Tower incorporates white marble at its base, and evolves to blackened stainless steel and shades of bronze and copper as the tower ascends’.

The statement adds: ‘The facade powerfully holds its shape, texture, and materiality at every angle, deploying a wide variety of fluted, cylindrical, and triangular shapes arranged in a strongly vertical composition between oversize glass panes.’

Approximately 550 residences will occupy the tower, 150 of which will be available for purchase and will start at an elevation of over 500ft (152m).

It’s planned that prospective buyers will be able to purchase residences in the landmark building from early 2022, with the building anticipated to open for occupancy later in the year. 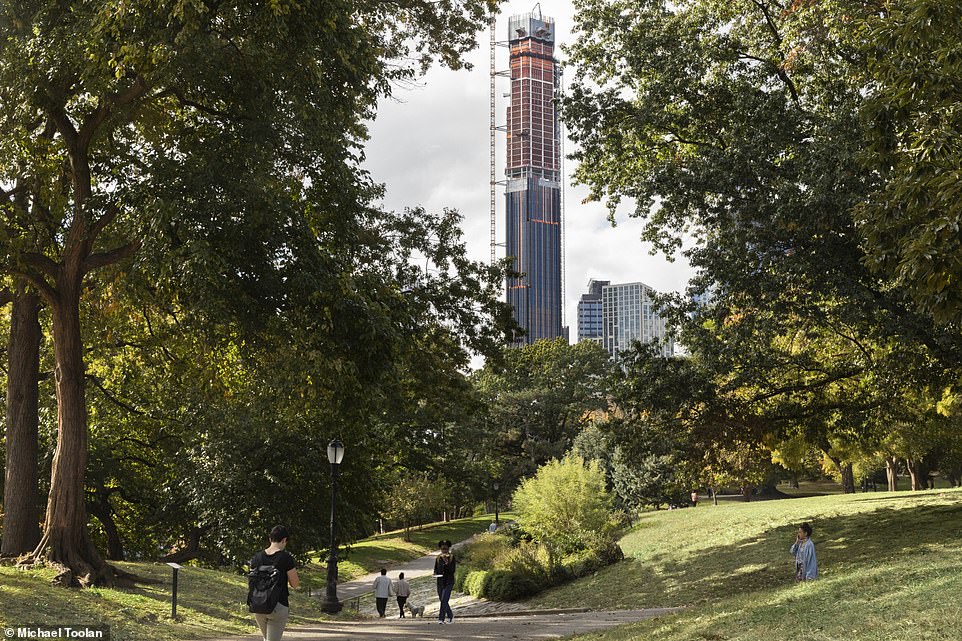 The 93-storey behemoth, which has been under construction since 2018, will offer views across the borough of Brooklyn and beyond 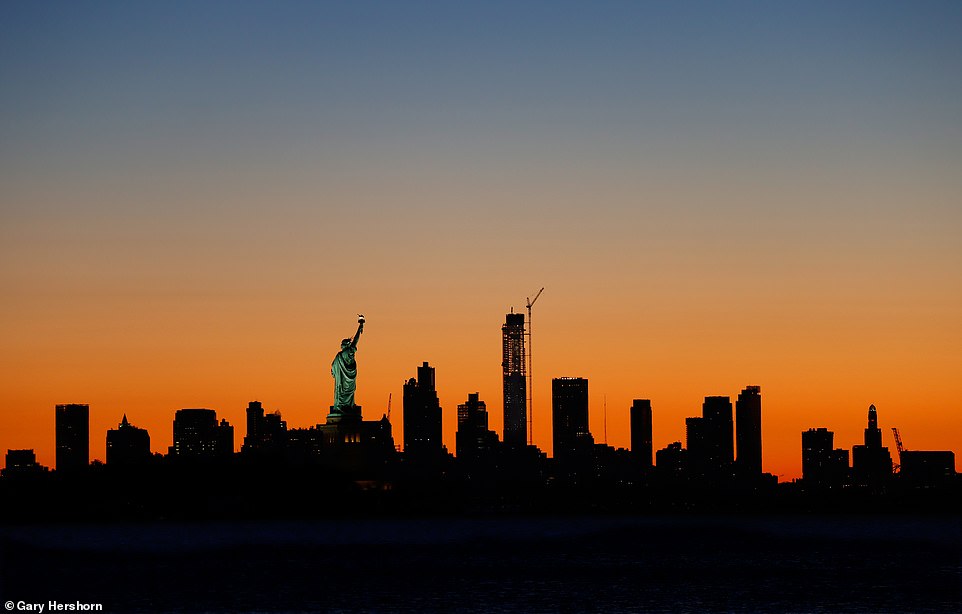 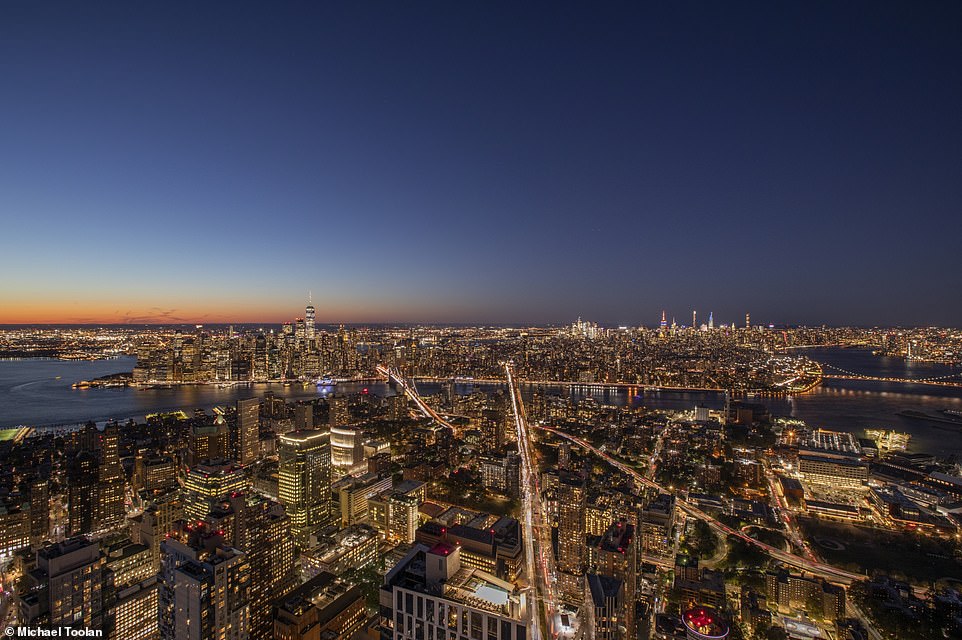 The view from inside the tower by night, stretching out over Brooklyn, the Manhattan skyline, and the East River 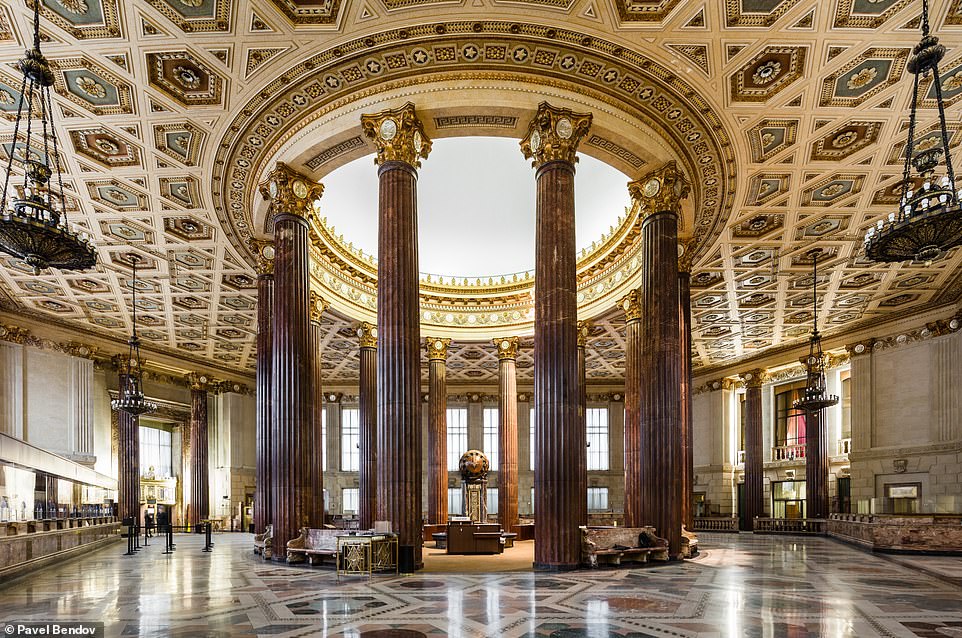 Pictured is the interior of the historic Dime Savings Bank of Brooklyn, which informed the geometric design of the skyscraper

Elsewhere in the tower, there are plans for ‘state-of-the-art health and fitness spaces’ and open-air galleries for ‘skyline lounging and recreation’.

A swimming pool is being built into the roof of the decommissioned Dime Savings Bank, where The Brooklyn Tower residents ‘will be able to swim, lounge, and barbeque around the historic dome’. 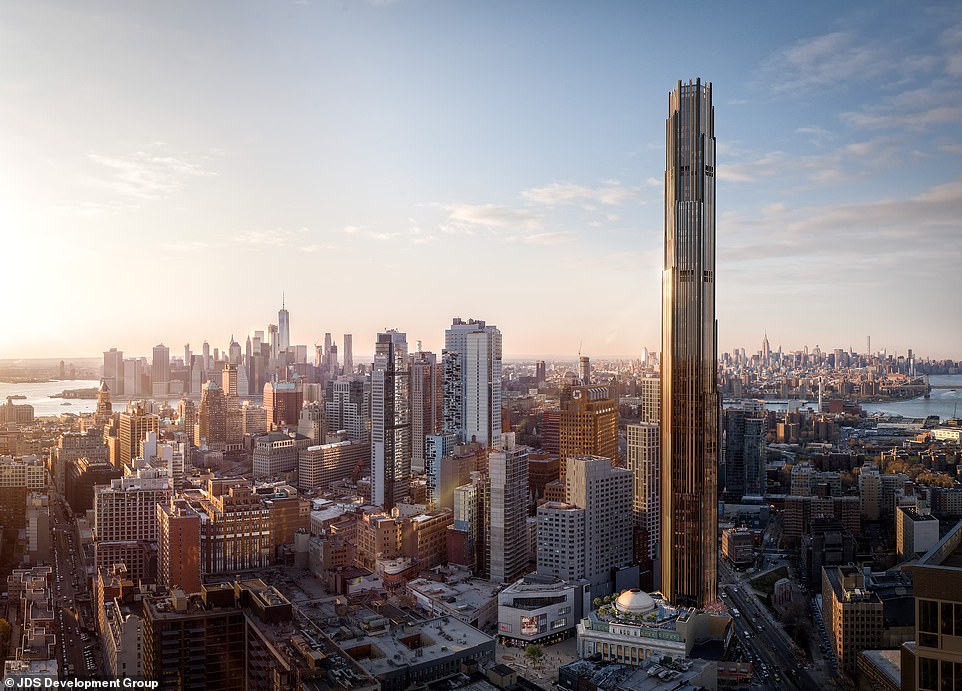 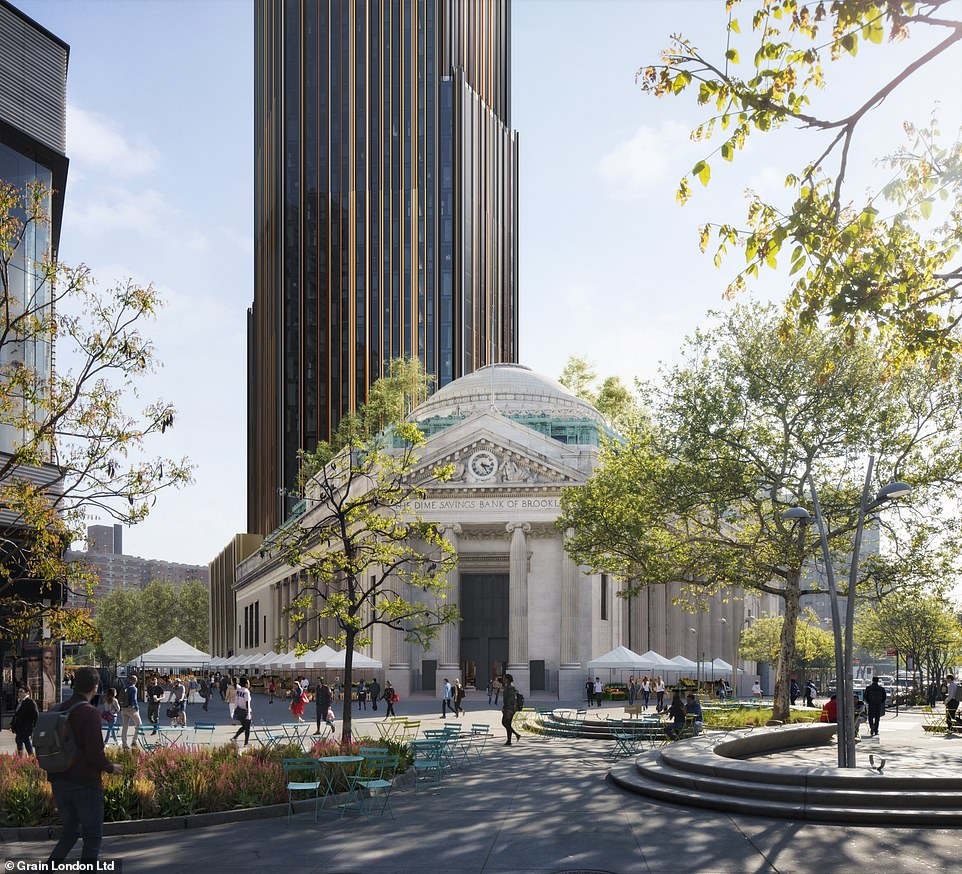 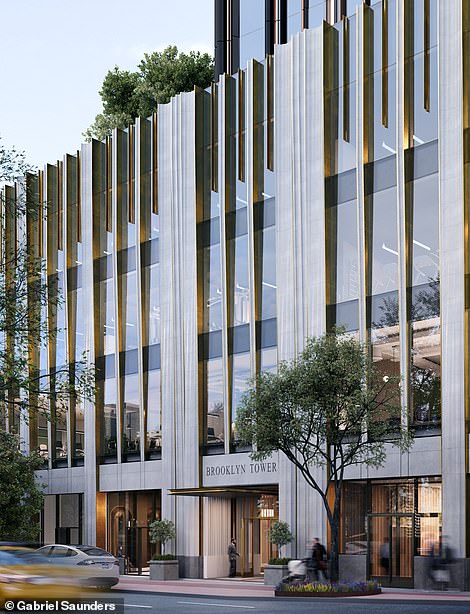 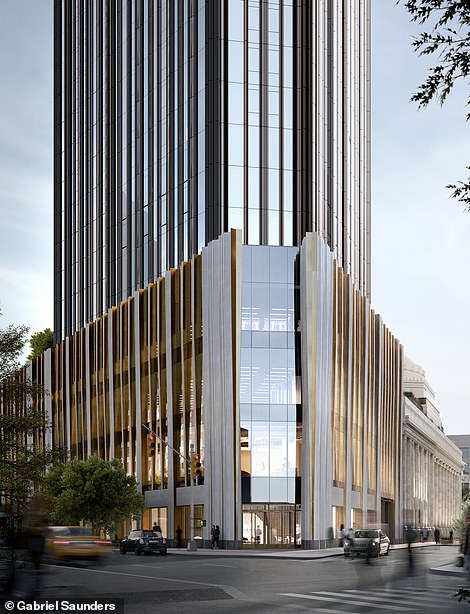 The topping out of The Brooklyn Tower knocks Brooklyn’s second tallest building, the 720ft- (219m) tall Brooklyn Point, off its pedestal. The third-highest skyscraper is 11 Hoyt, which scales over the borough at 620ft (189m).

As the supertall skyscraper nears completion, Gregg Pasquarelli, Founding Principal of Shop Architects, says: ‘The Shop team is thrilled to be a part of a project that is so impactful to one of the world’s most acclaimed skylines.

‘We wanted it to remain authentic, with that baroque, Brooklyn charm, but also look crisp and modern to capture the borough’s constant state of growth and influence.’