An illuminating 200th birthday tour with the Lady of the Lamp: Exploring Florence Nightingale’s family home and the museum dedicated to her

Florence Nightingale is back among us — or so it seems. All those new emergency hospitals have been named after her and, with impeccable timing, next week marks the 200th anniversary of her birth in a plush villa near Florence in Italy.

The World Health Organization named 2020 the first International Year of the Nurse and Midwife, even before the arrival of Covid-19. And Nightingale is widely considered to be the world’s first nurse.

Known as ‘the Lady with the Lamp’ for her nightly patrols around wards of sick and wounded British soldiers during the Crimean War, Nightingale revolutionised nursing and saved countless lives. Now, it’s possible to follow in her footsteps — some online, some after lockdown lifts. 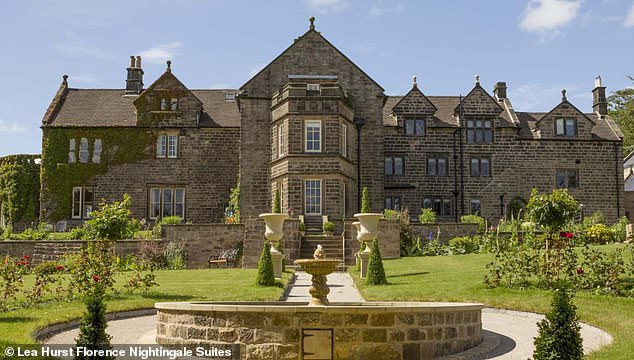 By the time Nightingale was a year old, the family had moved back to England and were living at Lea Hurst in Derbyshire. A substantial Jacobean house, it stands on the edge of the Peak District National Park, surrounded by formal gardens with sweeping views along Derwent Valley.

Refurbished and filled with period furniture, it is now an elegant B&B. You can even stay in Nightingale’s bedroom and relax in the Nightingales’ drawing room. The family soon moved their main residence to an imposing Georgian mansion, Embley Park in Hampshire (now a school), where their nearest neighbour was the Prime Minster, Lord Palmerston.

But they returned to Lea Hurst each summer, and Nightingale would wander the streets of the village of Holloway.

It was to her beloved Derbyshire home that she returned as an A-list celebrity, heroine of the Crimean War, to escape the ‘fuzz buzz’ of fame. ‘She hated it,’ says Lea Hurst’s present owner, Peter Kay. ‘So she snuck back here and settled down to write a report for Queen Victoria.’

Full of statistics and infographics, this game-changing document set out how lives could be saved through evidence-based nursing, good management and cleanliness.

She went on to found the world’s first professional nursing school at London’s St Thomas’s Hospital —where Prime Minister Boris Johnson was nursed through Covid-19 — and the hospital now hosts the Florence Nightingale Museum. 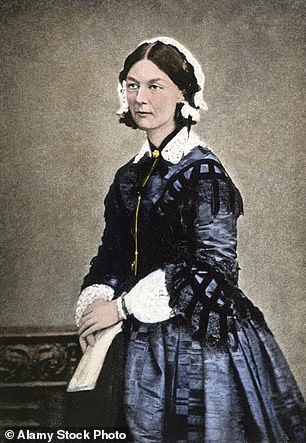 Next week marks the 200th anniversary of Florence Nightingale (pictured)

The museum is closed at present, but its 200th anniversary exhibition of 200 objects has been put online to view. It includes wonderful personal items such as Nightingale’s medicine chest, the gold watch her father gave her and her much-loved pet owl, Athena, whom she rescued from a group of taunting boys on the Acropolis, on a visit to Greece.

Exhibited too is Nightingale’s famous lamp — actually a Turkish lantern. We can even hear her voice in its only recording, made in 1890 at her London home (now demolished but marked by a blue plaque).

Unmarried, despite several eligible proposals, Nightingale lived at 10 South Street, Mayfair, for most of her adult life, and died there in 1910 aged 90.

She was buried in the family vault at St Margaret’s Church, East Wellow, Hampshire.

Celebrations of her bicentenary have been muted by Covid-19, but one commemoration will go ahead later this year. At Hampshire’s 900-year-old Romsey Abbey, a stained glass window will be installed. It depicts the moment when a teenage Florence, sitting in the grounds of Embley, felt called to her vocation.

It looks set to be an even more poignant memorial than anyone expected.