Greece’s secret gems: The usual Greek hotspots will be packed again this summer. But you can find blissful escapes on glorious islands that most people have barely heard of…

There are more than 6,000 sun-drenched islands and islets in Greece — and what could be better than an escape off the beaten track surrounded by sparkling seas, quiet beaches, the fragrant waft of pine trees and that inimitable quality of light.

Getting there might not be quite so easy but arriving by ferry can be an adventure in itself. So here’s our guide to some of the Greek islands you may never have heard about. 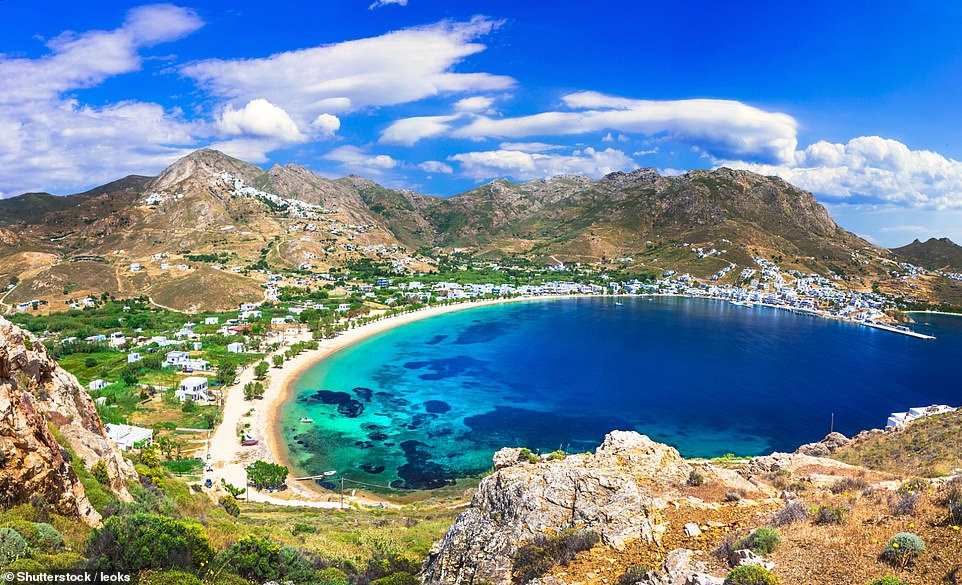 Shining half moon: Serifos island, pictured above, is home to invitingly sandy beaches

Serifos — the legendary home of Perseus (of Medusa fame) — is part of the Cyclades. Half a century ago, the bank on Serifos consisted of a man on a bicycle with a tin box who pedalled round the island once a week. All these years on, it has retained its laidback charm.

There are invitingly sandy beaches a scuba-diving centre where you can also hire boats, and bars and restaurants at the harbour.

DON’T MISS: Psili Ammos and Livadakia are among the best beaches, where you may find a tavern for a bite of fresh octopus.

HOW TO DO IT: Seven nights at the beach-front Alexandros Vassilia from £949 pp (sunvil.co.uk) including international flights to Athens and from Santorini, with ferry transfers to Serifos (two hours and three-and-a-half hours, respectively).

A charming church on Chios, a culturally-rich island that is mooted as the birthplace of the ancient Greek poet Homer 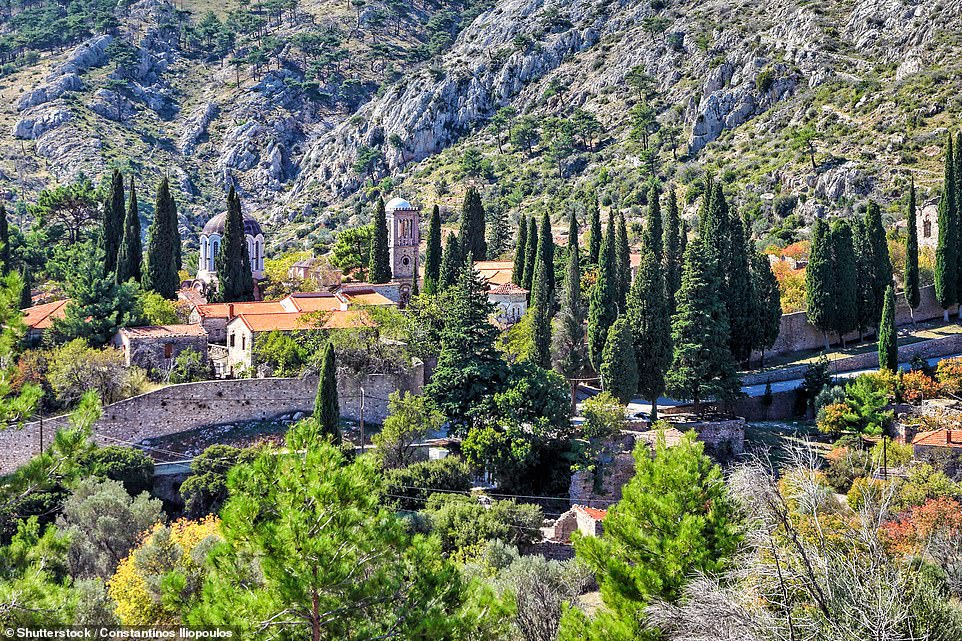 A view of  the 11th-century monastery of Nea Moni in Chios, close to the Turkish coast 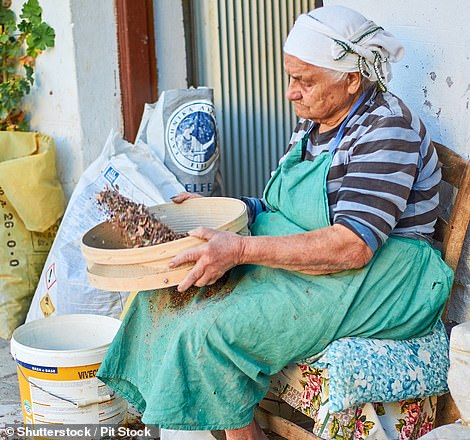 Close to the Turkish coast, Chios is famed for its mastic trees, which yield their precious resin — said by Hippocrates to cure everything from leprosy to whooping cough — like nowhere else on Earth.

Mooted as the birthplace of Homer, the island is rich in culture — from the geometric house facades of Pyrgi to the 11th-century monastery of Nea Moni, the medieval mountaintop village of Anavatos and the 17th-century houses of Kampos.

HOW TO DO IT: Seven nights in Voulamandis House in Kambos from £699 pp B&B (islandsofgreece.co.uk), including flights to Athens and domestic flight (50 minutes). 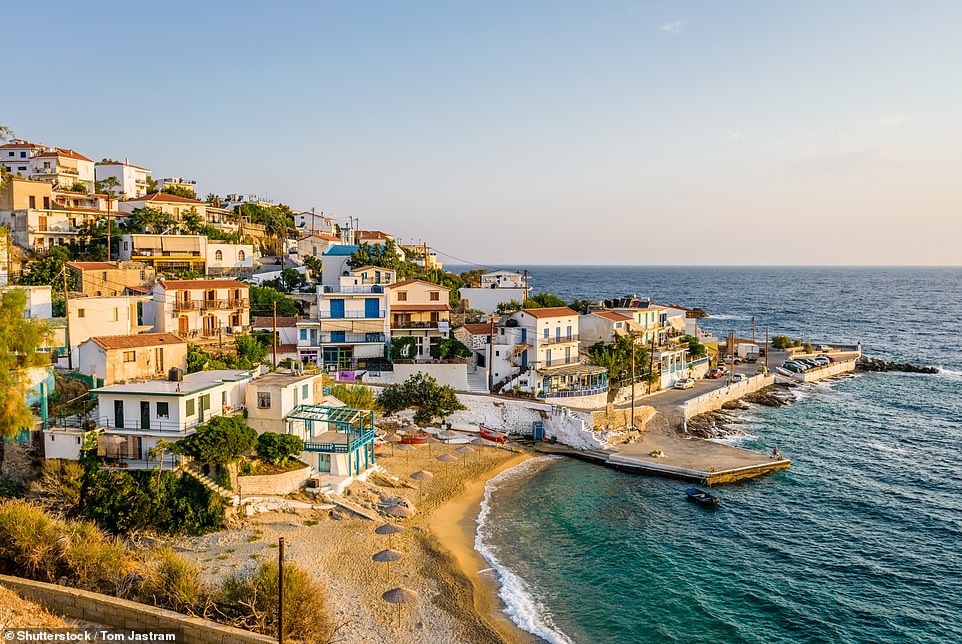 Above is the village of Armenistis on Ikaria. Seven nights B&B at the waterfront Erofili Beach Hotel there costs from £1,218 with Cachet Travel

Few islands remain as stuck in the mists of time as Ikaria, in the northern Aegean, named after the legendary Icarus who drowned off its shores when, flying too high, the sun melted the wax binding his feather wings.

Ikaria is known for its therapeutic springs and delicious lobsters. In centuries past, the islanders supposedly slept all day and only emerged at night. They still enjoy an eccentric reputation.

HOW TO DO IT: Seven nights B&B at the waterfront Erofili Beach Hotel in Armenistis from £1,218 (cachet-travel.co.uk) including flights to Athens and domestic flight to Ikaria (55 minutes). 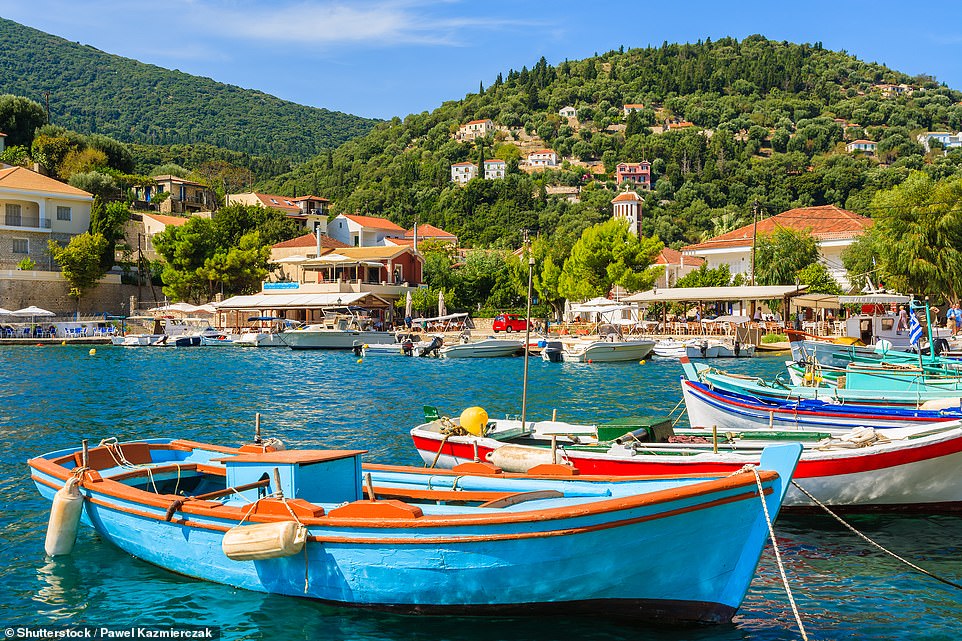 On a visit to Ithaka, don’t miss the fishing village of Kioni (pictured), with its tavernas and harbourside restaurants 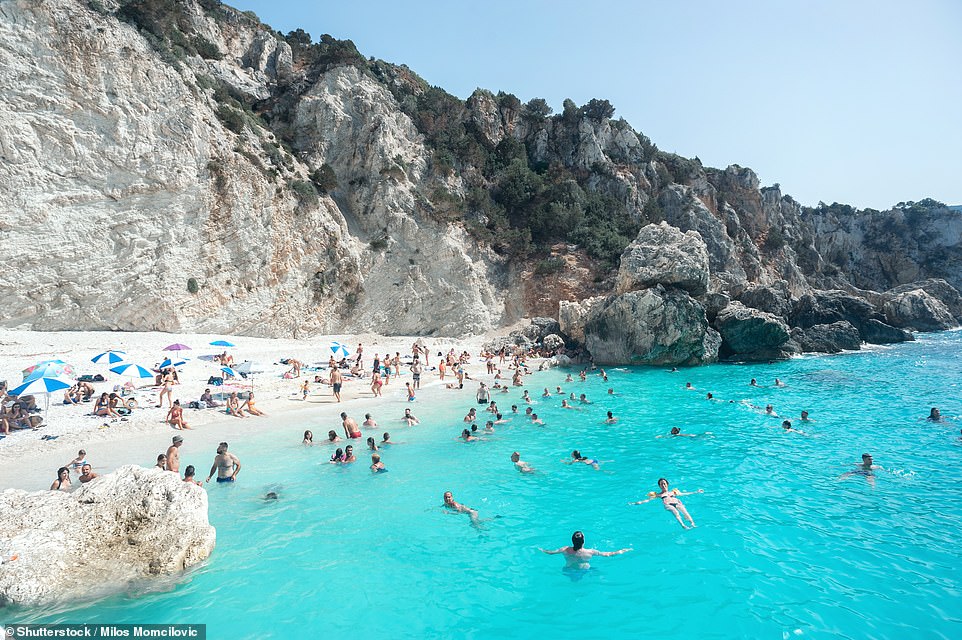 Ithaka is a ‘mountainous island of golden light, sparkling sea and sheltered coves’. Above is the island’s picturesque Afales beach

‘If this isle were mine,’ Byron wrote of Odysseus’s legendary home island in 1823, ‘I would break my staff and bury my books and never leave.’

It is easy to understand the poet’s impulse. The smaller, quieter sister of neighbouring Kefalonia in the Ionian Sea, Ithaka is a mountainous island of golden light, sparkling sea and sheltered coves. An ancient network of mule tracks makes for a walker’s paradise. There is plenty to discover, including its monasteries, charming hilltop towns and churches.

DON’T MISS: Fishing villages including Frikes and Kioni, with their tavernas and harbourside restaurants.

HOW TO DO IT: Seven nights at Neritos House from £841 pp (four sharing). Includes flights to Kefalonia, sea taxi or ferry transfer (45 minutes) and hire car (simpson travel.com). 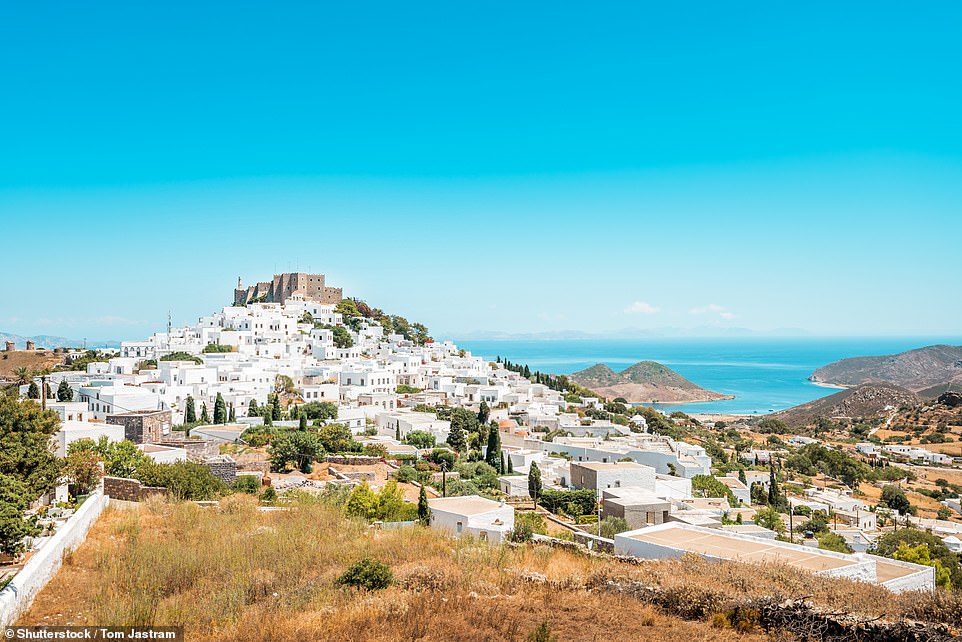 Patmos is blessed with a superb medieval capital, Chora (pictured), with mansions clad in bougainvillaea and thyme-fragrant hills 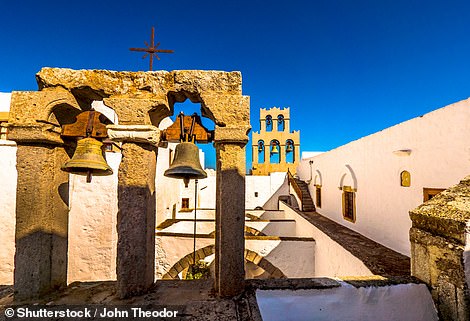 Above: The bells in the magnificent fortified monastery on Patmos

In the Dodecanese, Patmos comes to life at Easter and high summer when it attracts both blue-blood and Hollywood royalty in search of anonymity. It is renowned as the island of St John, who settled in a cave and had a vision that inspired his Revelations.

The cave remains, as does a magnificent fortified monastery built in his honour in the 11th century. The island is also blessed with a superb medieval capital, Chora, with mansions clad in bougainvillaea and thyme-fragrant hills.

DON’T MISS: The sheer beauty of the pine-clad rugged scenery of the island’s north.

HOW TO DO IT: Six nights at Skala Hotel in Patmos from £855 pp including flights to Kos, a night at a hotel in Kos and ferry transfers (two-and-a-half hours) between the islands (sunvil.co.uk). 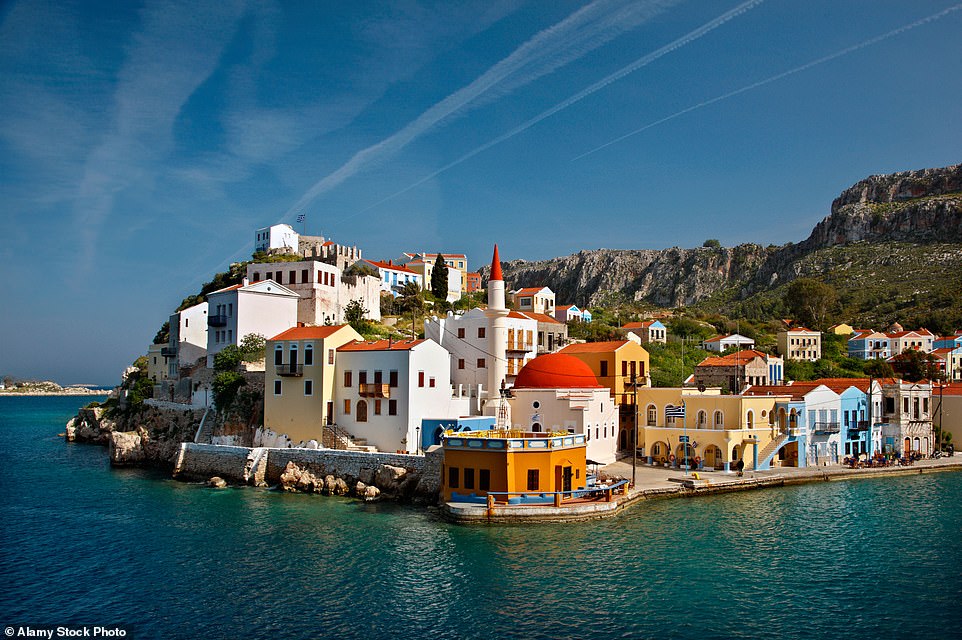 Island life: Take a water-taxi from the tiny isle of Kastellorizo, pictured above, and spend a day snorkelling at the nearby islets

Kastellorizo, also in the Dodecanese, is perhaps best known as the setting of the entertaining 1991 film, Mediterraneo. This tiny island has had a chequered history, successively occupied by Mycenaeans, Dorians, the Knights of St John, the Sultan of Egypt and, in 1450, by the King of Naples.

The ensuing 400-year long Turkish occupation ended in 1920 with Italian rule, when the island’s depopulation began. Look out for the ruins of the hilltop Castello Rosso and the 4th-century BC Lycian rock tomb.

DON’T MISS: A water-taxi ride to the islets of Rho or Strongyli for snorkelling.

HOW TO DO IT: Nine nights — seven at the waterfront Mediterraneo Boutique Hotel plus two nights in Rhodes — from £769 pp (islandsofgreece.co.uk) including international flights and air or ferry transfers (around two-and-a-half to three hours). 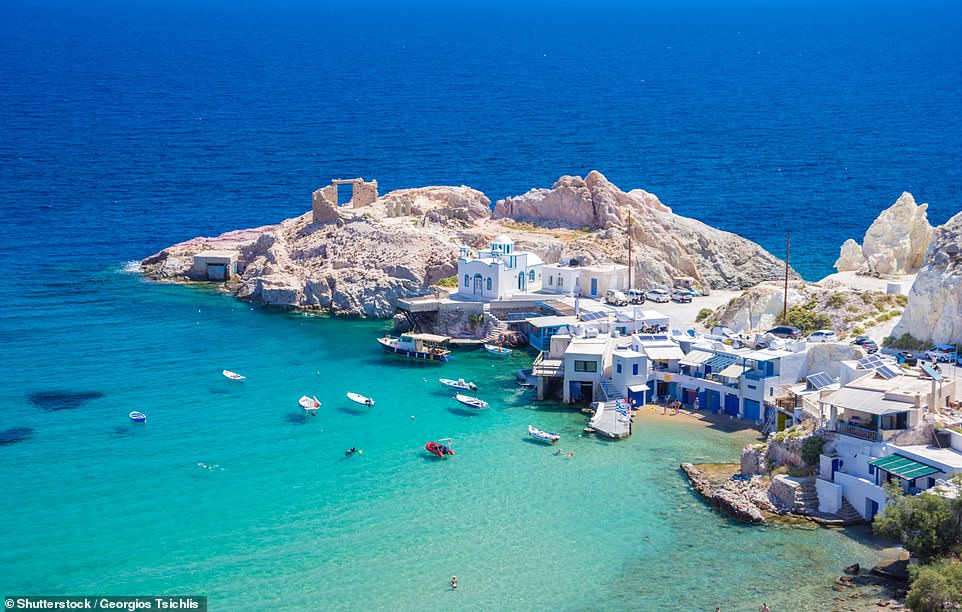 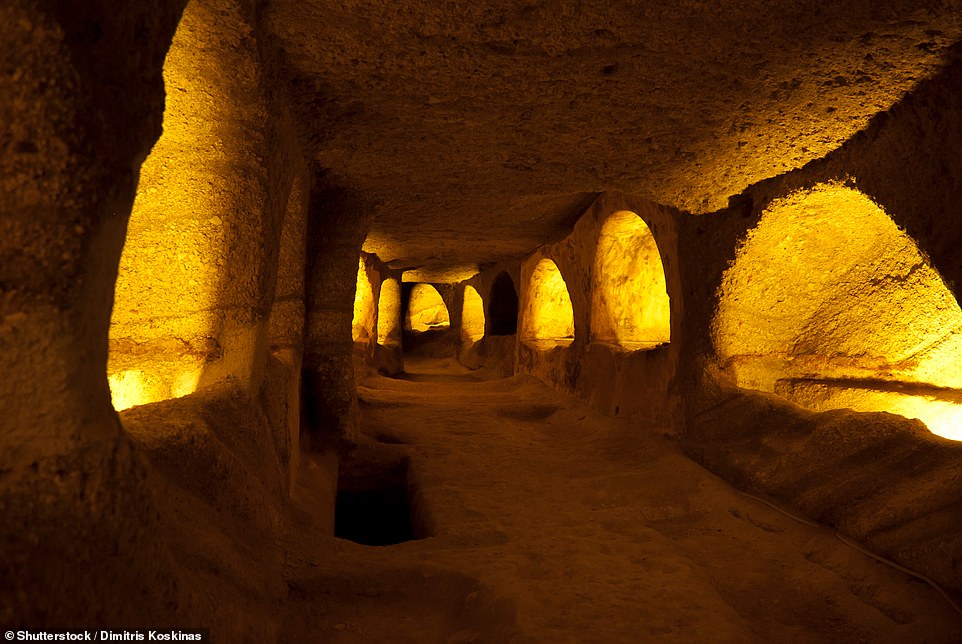 Spend an afternoon wandering through the Christian catacombs on Milos, pictured, which are set near where the Venus de Milo was discovered 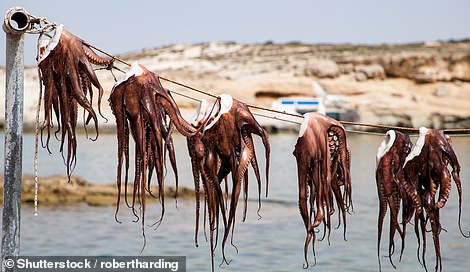 Above: Freshly caught octopuses drying out in Milos

The island of Milos was the original home of the Louvre’s famous Venus. It is a dramatic island with rock formations curling around a central volcanic caldera. The Cycladic style is typified in villages such as Plaka, with its whitewashed houses set in winding lanes.

There are also the blue-domed churches and windmills above Trypiti and fishermen’s huts carved into the cliff at Klima.

DON’T MISS: The Christian catacombs, near where the Venus de Milo was discovered.

HOW TO DO IT: Seven nights at the Miland Suites from £1,062 pp B&B including flights to Athens and a three-hour ferry transfer from Piraeus (escapetogreece.com). 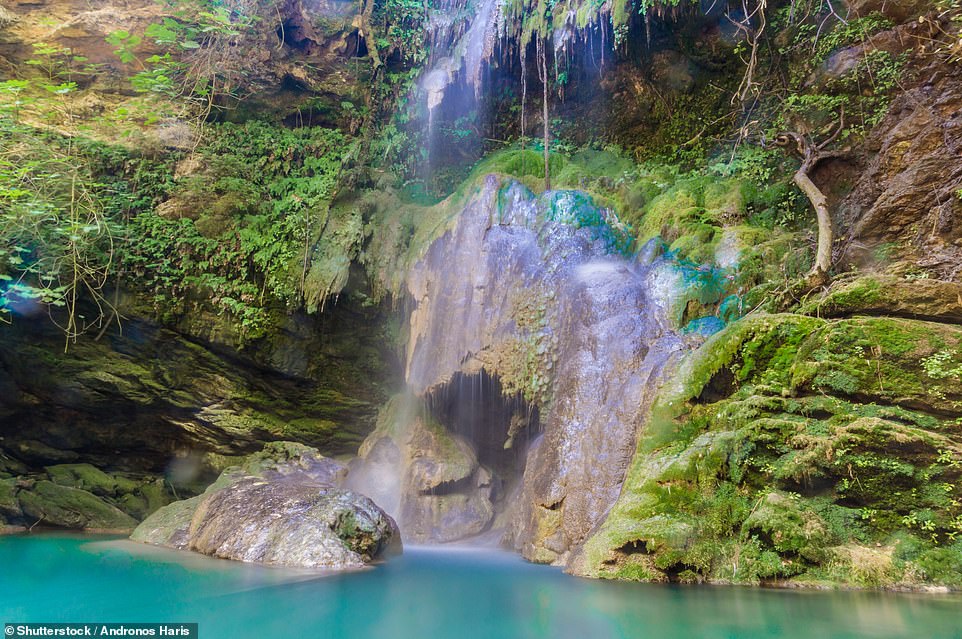 In the Ionian Sea, Kythira lies beneath the Peloponnese. It feels tucked away and overlooked, yet is home to delightful whitewashed sugar-cube houses and a lush green interior, with a riot of wildflowers in the spring.

The tiny islet of Avgo (Egg), off the southern tip, vies with Cyprus as the birthplace of Aphrodite. With the Neraida waterfall tumbling into an aquamarine pool, Venetian-era castle and spectacular hilltop views, it is a romantic setting.

DON’T MISS: Be sure to hire a car to explore the 40-odd secluded hillside villages.

HOW TO DO IT: Seven nights at four-star Kythea Resort Hotel in Agia Pelagia from £1,026 pp B&B (cachet-travel.co.uk) including flights to Athens and domestic flight (55 minutes). 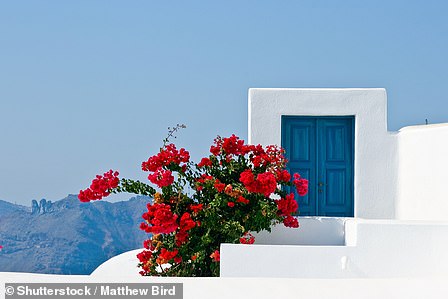 A doorway in Santorini. Blue doors on houses found on islands are believed to ward off evil spirits