It’s been 400 years since the pioneering voyage. Now plot a course to explore… the marvels of the Mayflower

Celebrations for the 400th anniversary of the Mayflower’s pioneering voyage to America are finally under way — a year later than planned due to the pandemic.

The plucky merchant ship sailed west from Plymouth, Devon, on September 16, 1620, carrying 102 passengers seeking religious freedom and a new start over the Atlantic.

They arrived 66 days later in what is now Massachusetts, establishing a fledgling colony at Plymouth that is a cornerstone in the story of modern America. 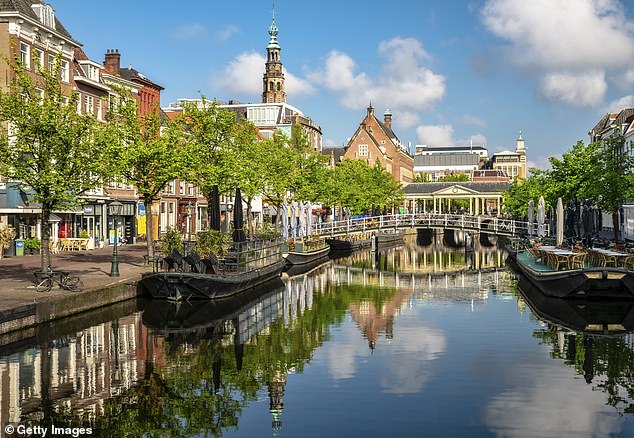 Separatists settled in the Dutch city of Leiden, pictured, before they joined with other groups in England to plan their voyage to the New World

More than 30 million people are descended from these founding families and Thanksgiving, which celebrates the Pilgrims’ first harvest, is now a major holiday in the United States. It falls on November 25 this year.

As the commemorations show, this epic story has links across England, the Netherlands and the USA. Here’s what’s happening and where to see it.

The Mayflower’s tale begins in 1600, two decades before the ship sailed, in North Nottinghamshire villages such as Scrooby and Babworth. Here dissenters, then known as Separatists, were opposed to the authority and practices of the Church of England.

John Robinson, considered the ‘pastor of the Pilgrim Fathers’ was born in Sturton-le-Steeple. William Bradford, the colony’s second governor, who wrote a valuable journal, came from Austerfield, just across the border in South Yorkshire.

WHAT TO SEE: Devoted to local history, Bassetlaw Museum in Retford, Nottinghamshire has a new Pilgrims Gallery focusing on William Brewster, who was born in Scrooby, sailed on the Mayflower, and became a prominent member of the colony. It is also the starting point for a self-drive trail to see villages and churches with a Mayflower connection, backed up with videos and podcasts (pilgrimroots.co.uk). 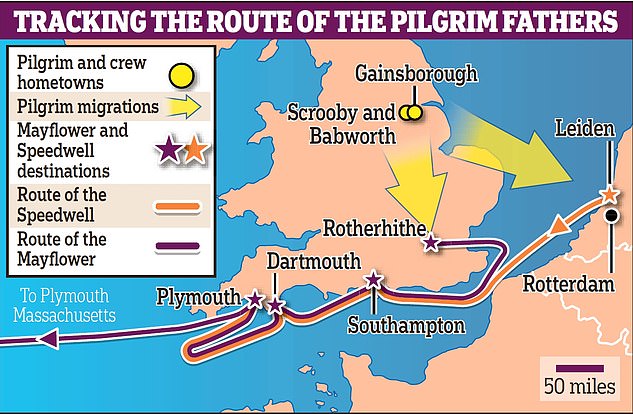 The Mayflower set sail from Plymouth, but its sister ship, the Speedwell, didn’t make the voyage. Pictured are the ships’ journeys from the Netherlands and around the coast of England 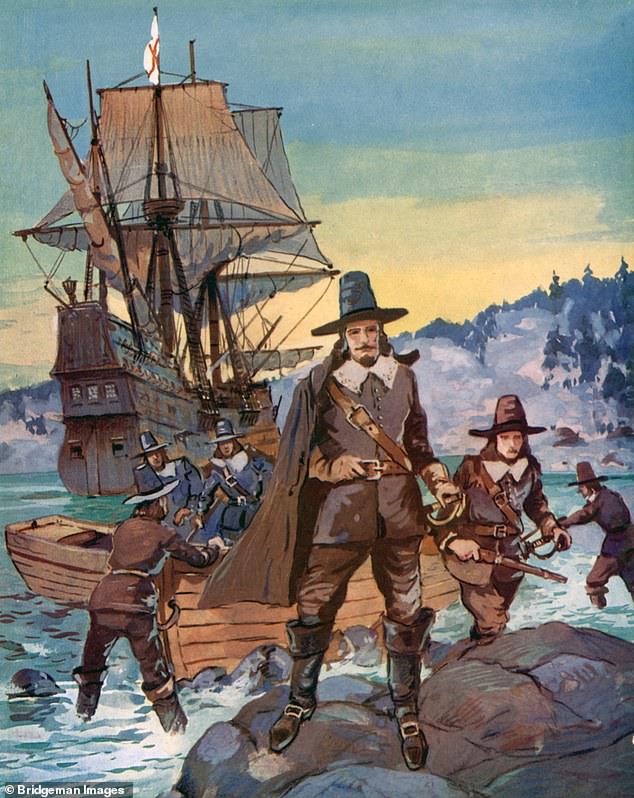 Pilgrims’ progress: Settlers depicted arriving in the New World on the Mayflower

JUST SO YOU KNOW…

Separatists are thought to have worshipped in secret at Gainsborough Old Hall, a medieval manor in Gainsborough, Lincolnshire. Its merchant owner William Hickman was a sympathiser.

In autumn 1607 some of them tried to escape to the more-tolerant Netherlands, but were caught and jailed in Boston. The next spring they finally sailed from Immingham to Amsterdam.

WHAT TO SEE: Gainsborough Old Hall is now an English Heritage site (english-heritage.org.uk).

In Boston (which gave its name to the U.S. port), the Guildhall still has the cells and courtroom where the dissenters were held and tried. A free exhibition there, Boston: The Pilgrims And The Thread To America, runs until August 31 (visitbostonuk.com).

The Separatists set up home in Leiden, 30 miles west of Amsterdam, and stayed for 12 years. In 1619, when war with Spain threatened, they planned to join with other groups in England and make a fresh start in the New World.

WHAT TO SEE: The Leiden American Pilgrim Museum evokes life in the city at that time. A two-hour, self-guided Pilgrims Route walking tour is available from the tourist office (leidenamericanpilgrimmuseum.org, visitleiden.nl).

On July 22, 1620, the Dutch contingent set sail from Rotterdam aboard Speedwell, meeting up in Southampton with Mayflower, which brought 65 pilgrims from Rotherhithe, London. 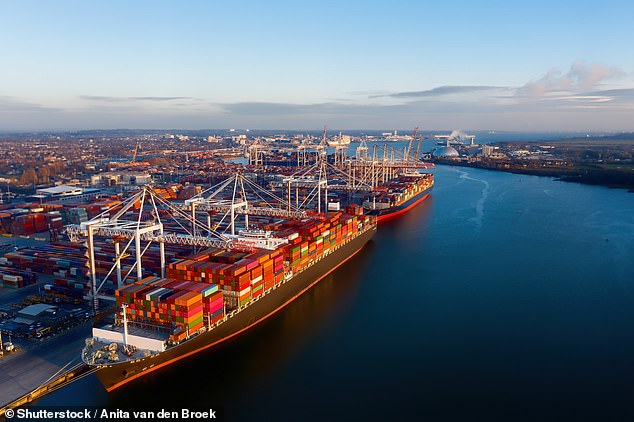 WHAT TO SEE: In Rotherhithe, the 16th-century riverside Mayflower pub celebrates this historic departure.

It is just a few steps from St Mary’s Church where Christopher Jones, who captained the ship, is buried, although his grave has been lost (mayflowerpub.co.uk).

In Southampton, a free exhibition at Westgate Tower, open on Sundays, tells the story of Mayflower and Speedwell’s departure from the city with an optional guided walk (mayflower400southampton.co.uk).

The voyage did not go well and the two ships were forced to call into the Devon port of Dartmouth for repairs to Speedwell, which was leaking badly.

After setting off once again, the same ship ran into difficulties near Land’s End, forcing a return to Plymouth. 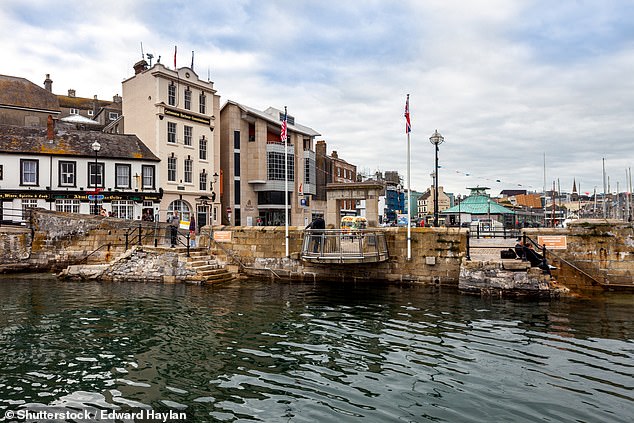 The Mayflower finally set sail from Plymouth, Devon, on September 16, 1620. Pictured are the city’s Mayflower Steps by the harbour

Eventually it was decided that only the Mayflower would proceed, finally setting sail on September 16, 1620.

WHAT TO SEE: The Box, a new £40 million cultural complex, is staging a major exhibition Mayflower 400: Legend And Legacy, until January 2, 2022. The city also has a self-guided Mayflower Trail available on the free Plymouth Trails app (visit plymouth.co.uk).

CAPE COD AND BEYOND

The Mayflower intended to make landfall in Virginia, but rough seas forced it to drop anchor further north at Cape Cod. 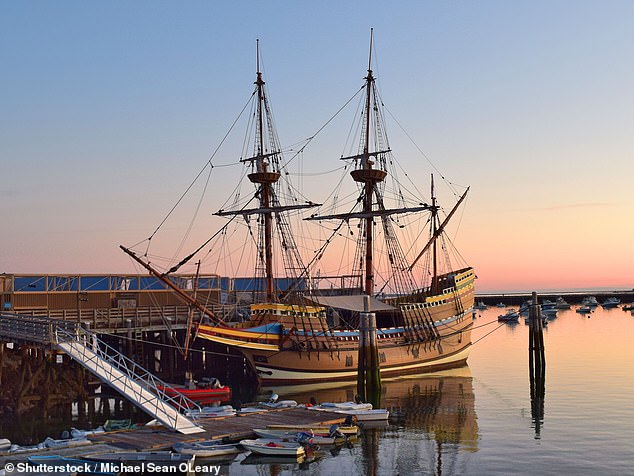 The Mayflower’s intended destination was Virginia, but choppy waters meant it was forced to drop anchor near Cape Cod. Pictured is the replica ship, the Mayflower II, at Plymouth Harbour, Massachusetts

The Pilgrims’ first settlement, Plymouth, was established on the other side of the bay with help from the Native American Wampanoag people.

As more settlers followed, Boston was founded in 1630.

WHAT TO SEE: About 40 miles south of Boston, Plymouth rejoices in its role in the birth of a nation. Key sights are a replica ship, Mayflower II, the Pilgrim Hall Museum and Plimoth Plantation, where costumed interpreters recreate life in 1627 (seeplymouth.com).