Born to rum in Barbados: With its pristine beaches and lively restaurant scene, this Caribbean beauty has long been a firm favourite for winter sun – and we can even go there after lockdown!

A designer friend was given the task some years ago of changing the interior décor of a stuffy London ‘Gentleman’s Club’ without its members noticing.

Something similar has been going on at the redoubtable Cobblers Cove, just outside Speightstown on the north-west coast of Barbados — a much-loved hotel which the Godsals, a British family, bought in 1968 and which has changed little over the years, much to the delight of its more mature guests.

But as the baton has passed from one generation to the next, even the matriarch of the family, Lady Elizabeth Godsal, accepts that a freshening up is no bad thing to catch the eye of a younger crowd. 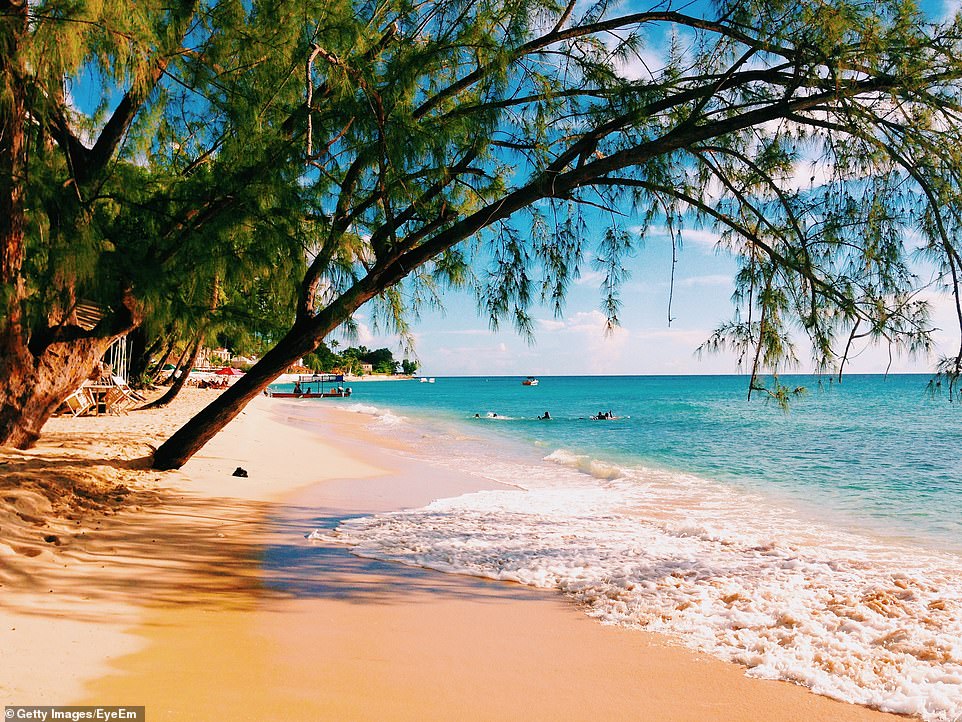 Vibrant: Holetown beach in Barbados. The Daily Mail’s Mark Palmer visited the island and described it as ‘big and buzzy’

Consider it done, with the help of Soane Britain, the London-based interior design studio, which has added splashes of colour that blend in with the gorgeous pink colonial-style building that echoes the style of the great architect Oliver Messel.

Each of the 40 suites scattered in the garden and on the sea front has been given a subtle nip and tuck but the wicker furniture remains.

The drawing room behind the bar has new wispy curtains that pick up the breeze and billow all day, providing what Soane Britain calls ’emotional air-conditioning’.

The original house was called Camelot, built in 1941 by wealthy sugar planter Joseph Haynes, who was by all accounts a much-loved politician. He and his family lived there until he died in 1963, which was when the Godsals, who originally came to Barbados during the English Civil War, stepped in. 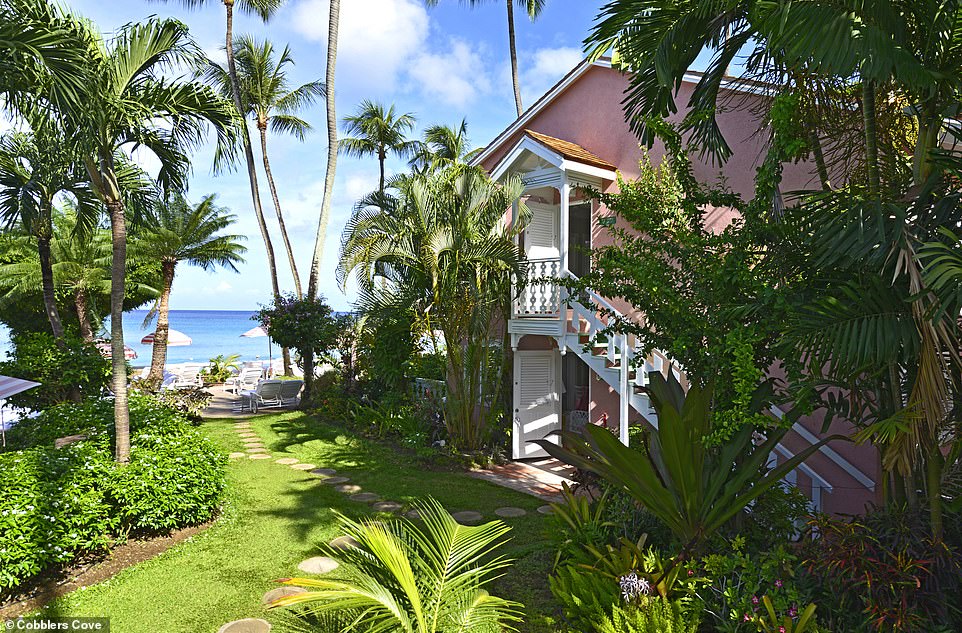 Cobblers Cove, pictured, just outside Speightstown on the north-west coast of Barbados is a much-loved hotel which the Godsals, a British family, bought in 1968 and which has changed little over the years 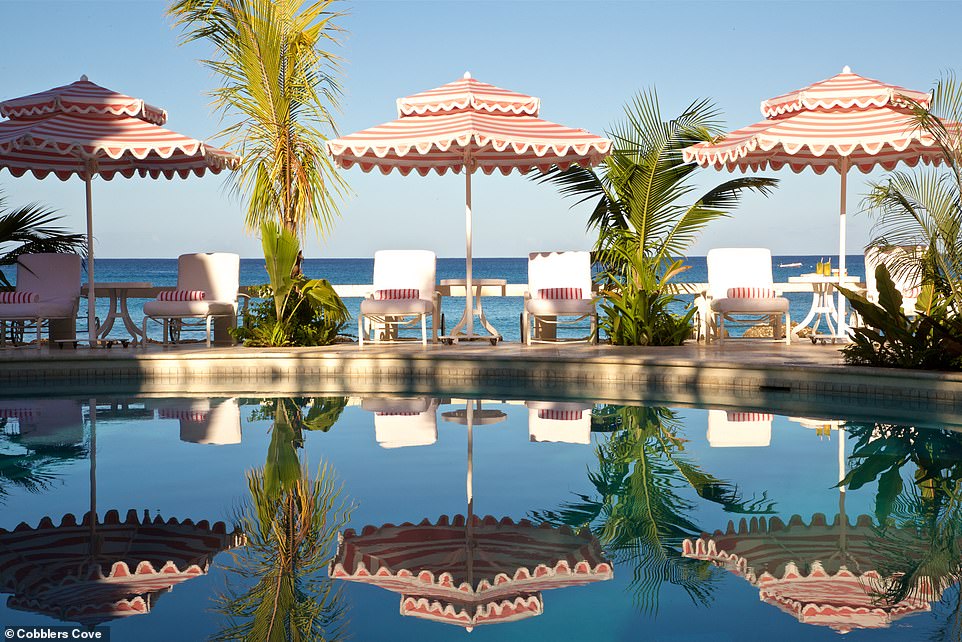 The pool at Cobblers Cove. When you stay at Cobblers, you get a 15-minute boat ride each day if you wish

Today, Cobblers is everything glitzy Sandy Lane, some five miles south, isn’t. Indeed, the late director and Sandy Lane regular Michael Winner was once regarded as ‘not the right fit’ by Alan Godsal, who died in 2011. Which is to say that Cobblers is intimate, unflashy, old-fashioned and remarkably seductive.

But, then, the same could be said for Barbados as a whole.

There’s something for everyone on this big, buzzy island. One morning, on the beach, we bump into a retired couple from Essex who spend a month here every winter, renting a little studio apartment in Speightstown and living more cheaply than they do back home.

‘What do you do every day?’ we ask. The man says that, on this particular jaunt, he’s spent a lot of time seeing how high he can pile shells one on top of each other without them falling down. 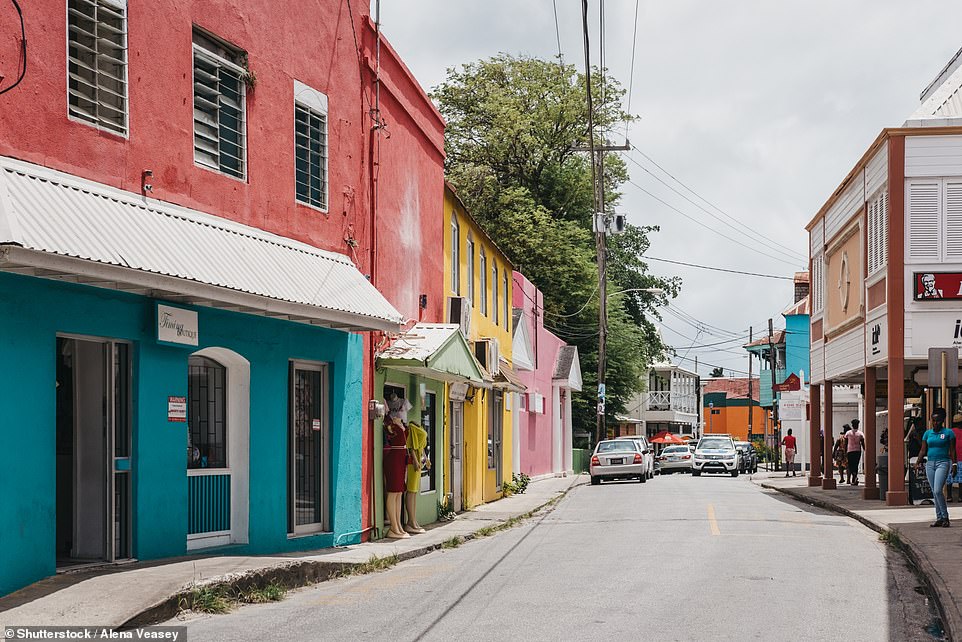 Speightstown, pictured, has a new restaurant called Hugo’s as well as one or two chi-chi shops doing business nearby

WHAT TO KNOW BEFORE YOU GO

Tourists are required to take a PCR test no more than 72 hours before arrival.

An online immigration/customs form must be completed 24 hours before departure at travelform.gov.bb, and the negative test result uploaded.

The test result should also be printed out.

On arrival, visitors must remain at one of its approved properties (which includes Cobblers Cove). They are not confined to their rooms and are able to use the hotels’ facilities.

Visitors are tested again four to five days after the first test in the UK. These can either be carried out at a government facility or at your hotel (costs vary).

If the second test is negative, guests are free to explore the island.

Tourists must have a thermometer as they may have to share temperature readings with public health officials via phone or text.

Scruffy Speightstown — a short walk along the beach from Cobblers — also seems to have had something of a face-lift. A new restaurant called Hugo’s has opened, a brother to Cin Cin in Holetown, and one or two chi-chi shops are doing business nearby in adorable little chattel houses.

It was once the island’s busiest port and what we like is how there is more mingling between locals and tourists in this part of the island than in the smart strip further south.

This is especially evident in Speightstown’s Fisherman’s Pub and Grub (founded 1936), where you can eat like a king for a fiver and enjoy Caribbean-style karaoke on Saturday nights.

Although I’m not sure that many Cobblers’ guests, such as Downton Abbey’s real life owners Lord and Lady Carnarvon, the Sangsters, Dame Judi Dench and Maurice Saatchi, are regulars.

And don’t forget that in addition to the plantation houses, gardens, rum distilleries, pottery parlours and its notorious carnival, you get two for the price of one in Barbados.

On the southern stretch west of the airport and all along the west coast, the sea is warm and calm, the shoreline a little cluttered, the mood variously lively and sophisticated.

On the eastern side, the Atlantic Ocean is rumbustious, uninviting for swimmers (but terrific for daring surfers), with sleepy villages and working farms going about their business virtually undisturbed by tourists.

Halfway between the two coasts is St Nicholas Abbey where you might expect to find a building with a religious past. Instead, it’s one of only three remaining Jacobean plantation houses in the world, dating back to around 1650.

It’s been lovingly restored by its current owner, whose friendly staff will let you sample far too much of their home-made rum.

When you stay at Cobblers, you get a 15-minute boat ride each day if you wish.

We take up this option and enjoy boatman Bradley’s commentary as we speed across the water. He points out who lives where, including Cliff Richard’s huge house, which is on the market. 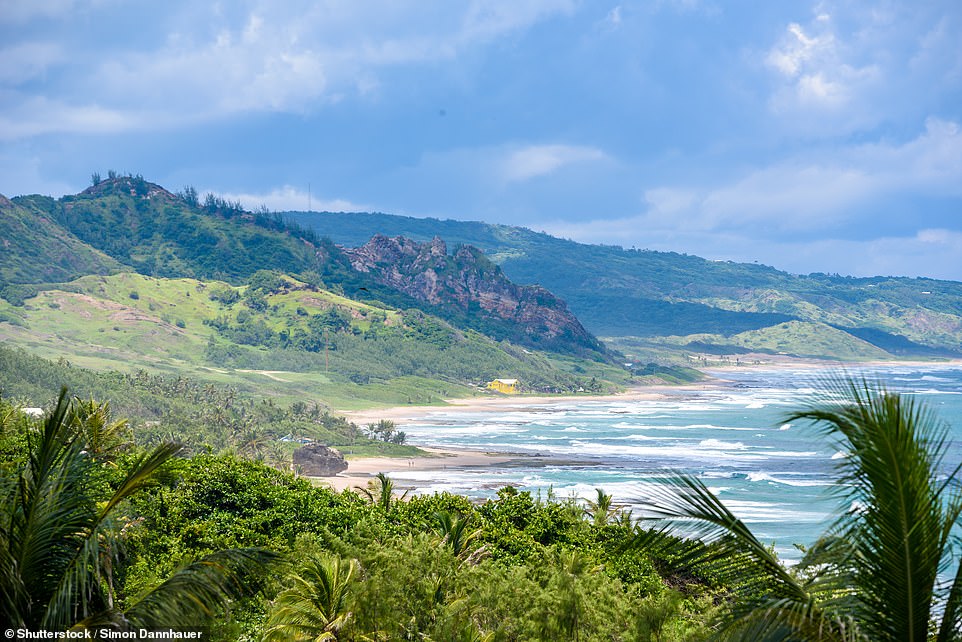 On the eastern side of the island, pictured, the Atlantic Ocean is rumbustious and uninviting for swimmers but terrific for daring surfers

The hotel’s restaurant, Camelot, is gorgeous at night and lively during the day on Sundays when it’s given over to a BBQ.

New additions to Cobblers include the candy-striped beach umbrellas, which were designed in Santa Monica.

I head off to repair beneath one after a couple of full-throttle rum punches, only for my mobile to crash to the ground, smashing the screen in all directions.

‘Not a problem,’ says the receptionist. So I leave it with her and, a couple of hours later, my phone is returned with a brand new screen and in full working order. If only life could be like this all the time.

Elegant Resorts offers seven nights’ B&B in a Garden View Suite from £3,705 per person at Cobblers Cove. This includes BA flights from Gatwick, private transfers and UK lounge passes, based on two adults departing on January 20, 2021. Vist elegantresorts.co.uk or call 01244 897294.