Take a flight of fancy from the comfort of your own home over never-before-seen parts of Pompeii, thanks to extraordinary new drone footage

Sit back, relax and take a stunning flight of fancy over a never-before-seen part of one of the world’s most extraordinary ancient sites.

Amazing drone footage has been released of new excavations of sections of Pompeii not seen since Vesuvius erupted in AD79 and buried it in up to 23ft of ash, giving locked-down would-be tourists a sneak peek from the comfort of their sofas. 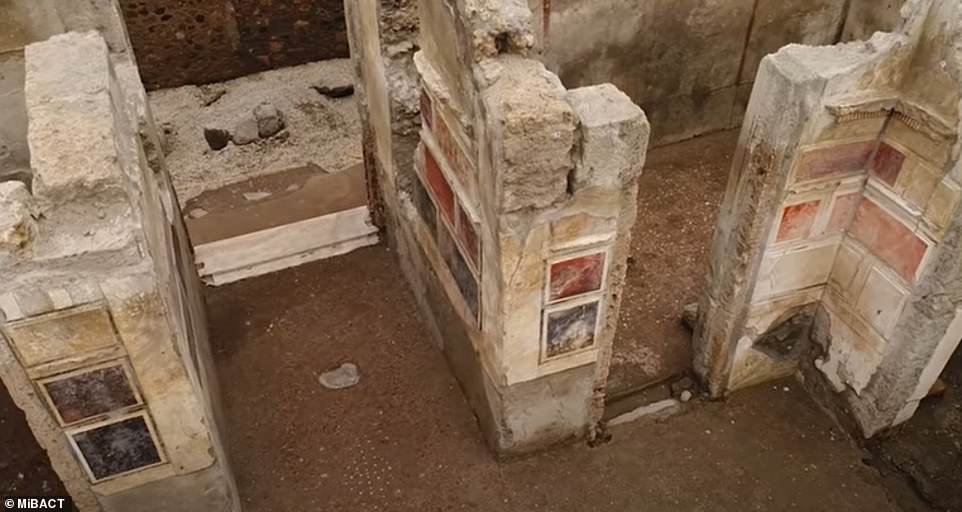 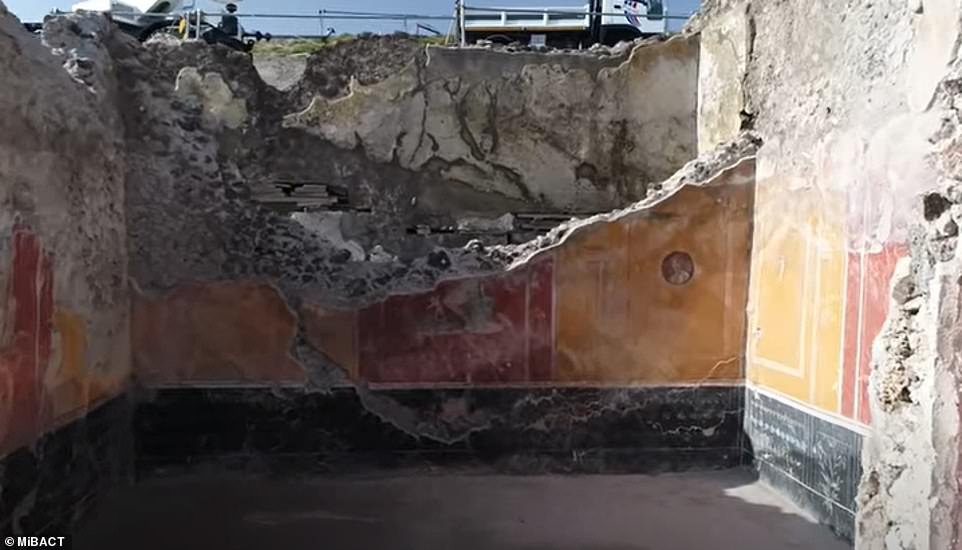 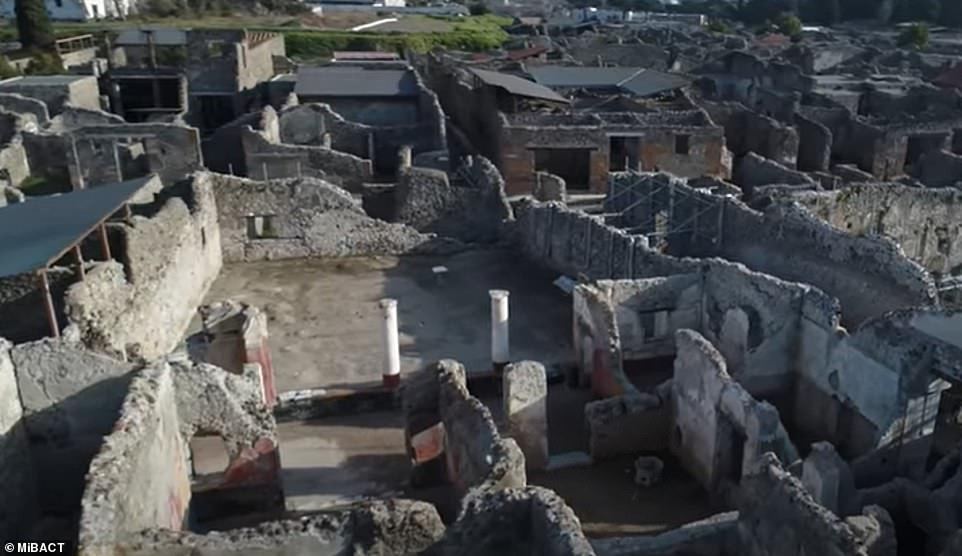 Drone footage of the excavation, which has been uploaded to YouTube, is narrated by Pompeii Archaeological Park Director Massimo Osanna 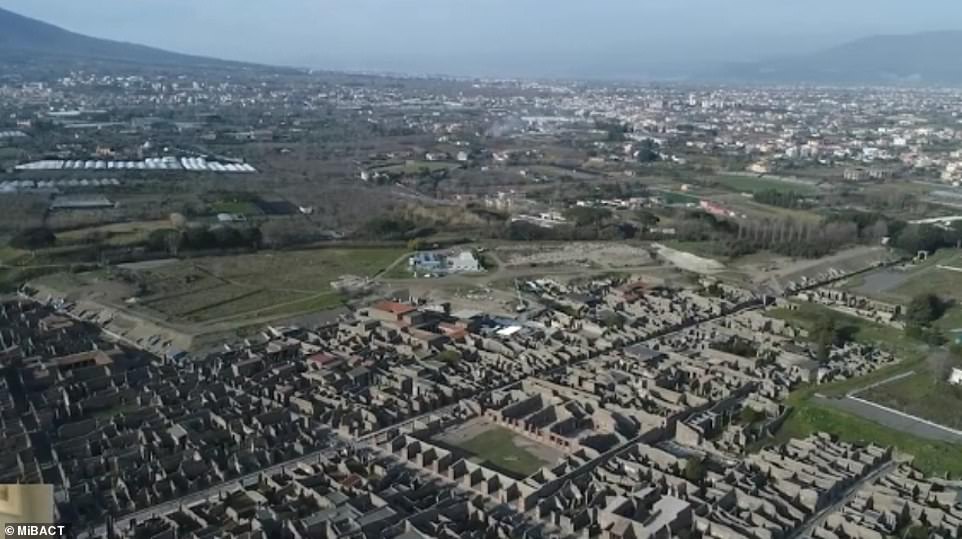 The Pompeii footage, which has been uploaded to YouTube, sweeps around the ongoing excavation of Regio V, a 54-acre archaeological site in a northern part of the ancient city where, over the past two years, experts have discovered a trove of extraordinary finds.

It is narrated by Pompeii Archaeological Park Director Massimo Osanna and, at first, the drone descends into what has been dubbed the ‘House with the Garden’, where the remains of 11 victims of the eruption, mostly women and children, have been found.

The footage shows beautiful colourful frescoes adorning the walls of the house as well as a painted portico.

Mr Osanna explains: ‘The House with the Garden is a house that we named as such precisely because the first, very large, room which came to light turned out to be a garden, in which we have been able to excavate all the flowerbed boundaries, and make casts of the roots of the plants which had been planted there.

‘Our palaeobotanists have gathered all of the evidence in order to study the garden and understand what had been planted in it, as well as how it was laid out, and therefore it will be possible to restore it in a philologically correct manner.’

The drone then moves on to a different house, the House of Orion, which takes its name from the colourful mosaics that depict Orion that were found here. 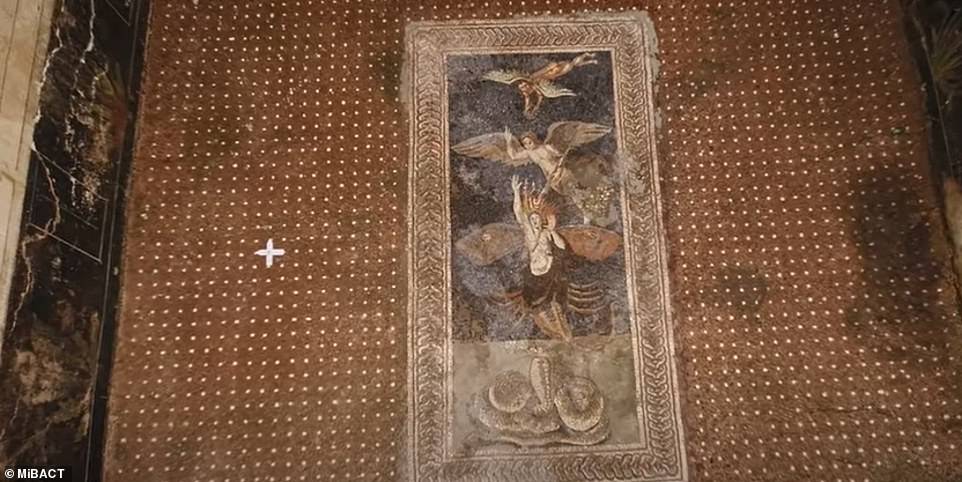 The drone hovers over an intricate mosaic, which depicts a half-man, half-scorpion with butterfly wings 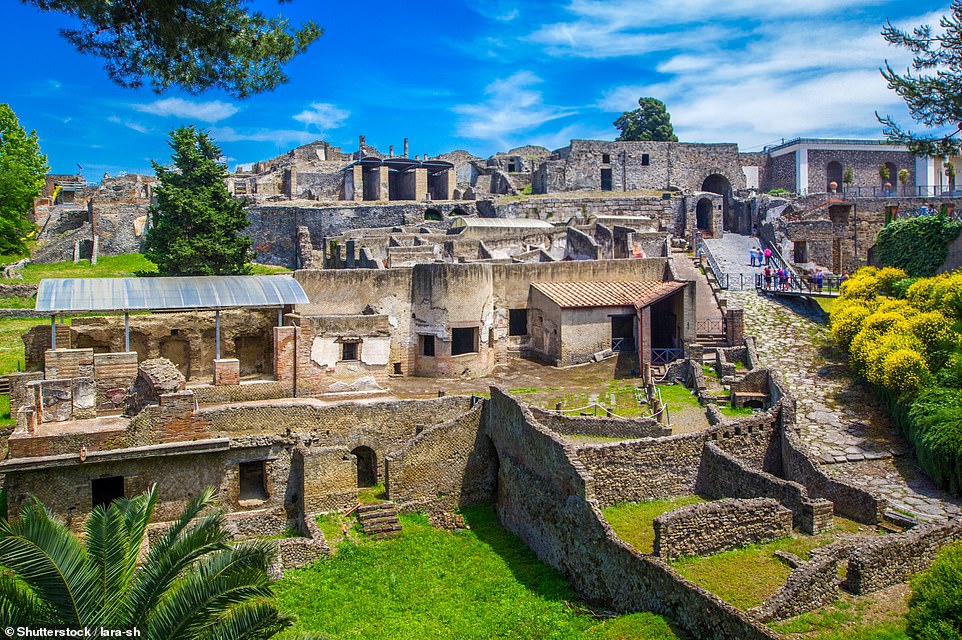 A volcanic eruption from Mount Vesuvius destroyed the ancient city of Pompeii. There were no survivors 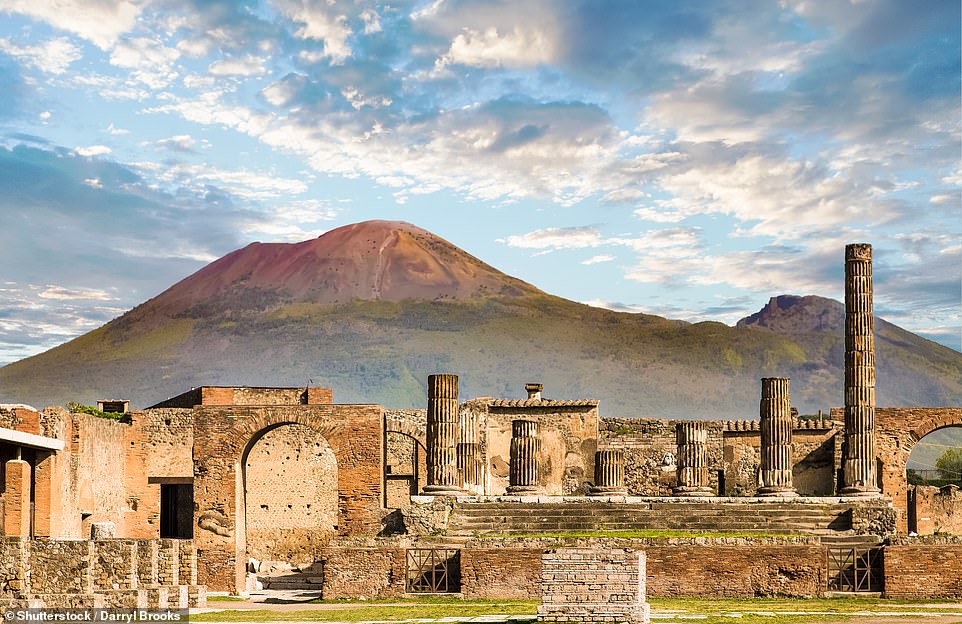 Pompeii with Mount Vesuvius in the background. Pompeii was discovered by archaeologists 1,700 years after the eruption that destroyed it 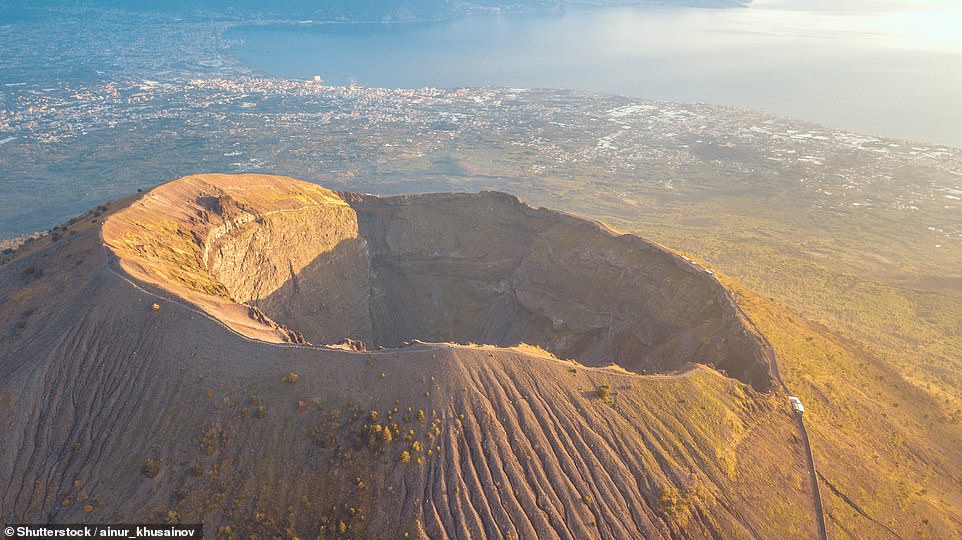 Mount Vesuvius, pictured, has erupted four times over the past 200 years

One of the more exciting finds in this house is a mosaic, which shows a half-man, half-scorpion with butterfly wings.

Mr Osanna adds: ‘At the end of the day this house is also small, and while it does not consist of particularly large spaces, it has yielded true masterpieces, such as this mosaic of Orion for example, which gives the house its name.’

Meanwhile, the interactive scans of Herculaneum give virtual visitors the chance to explore a reconstruction of the ancient city.

Each week a new 3D scan of an individual building or house is made available – with Casa del Bel Cortile being the only structure added so far. 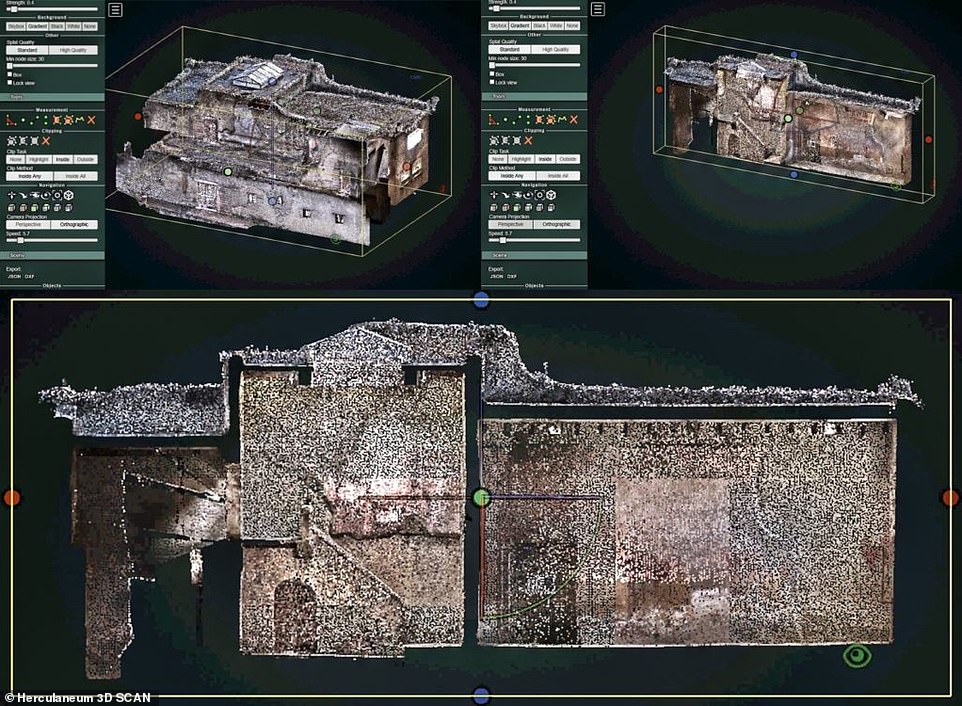 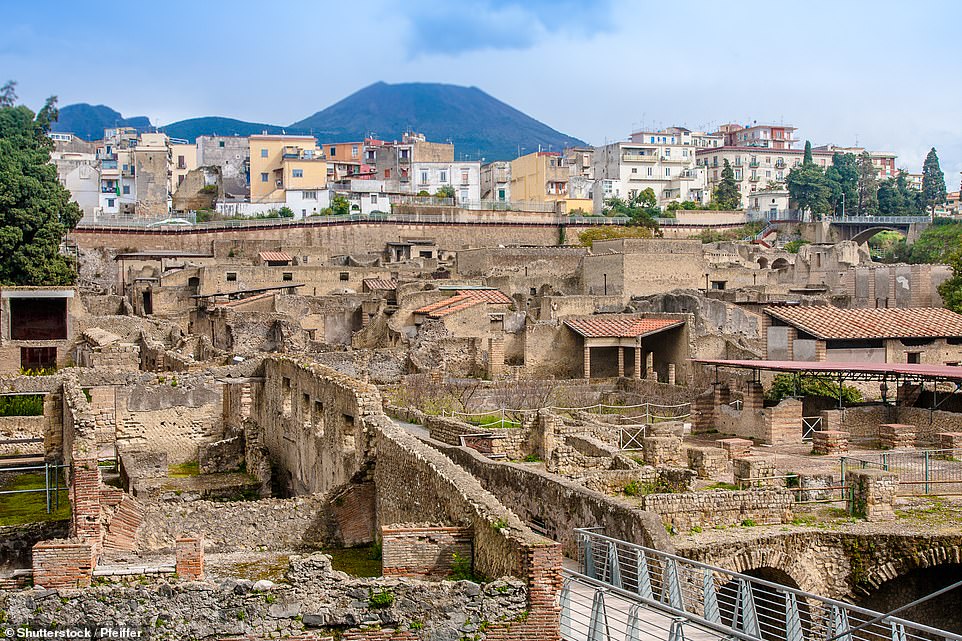 Ancient Herculaneum next to the modern-day version, with Mount Vesuvius in the background

Here visitors can look at the stunning frescoes that are still on the walls.

The eruption of Mount Vesuvius in AD79 buried Pompeii – as well as the cities of Oplontis, Stabiae and Herculaneum – under ash, rock fragments and mud.

The thermal heat generated by the explosion is thought to be around 100,000 times that of the two atom bombs that destroyed Hiroshima and Nagasaki.

There were no survivors in a roughly 10-mile radius around the cone.

This event ended the life of the cities, but because it buried them in ash so rapidly they were preserved until rediscovery by archaeologists nearly 1,700 years later.

The excavation of Pompeii, the industrial hub of the region, and Herculaneum, a small beach resort, has yielded unparalleled insights into Roman life.

Mount Vesuvius erupted in the year AD79, burying the Roman cities of Pompeii, Oplontis, and Stabiae under up to 23ft of ash and rock fragments, and the city of Herculaneum under a mudflow.

A 500C pyroclastic hot surge and an avalanche of ash, rock and poisonous gas that rushed down the side of the volcano at 124mph (199kph) ensured there were no survivors.

Pyroclastic flows are ultra-fast streams of hot gas and volcanic matter that spew forth from some eruptions. 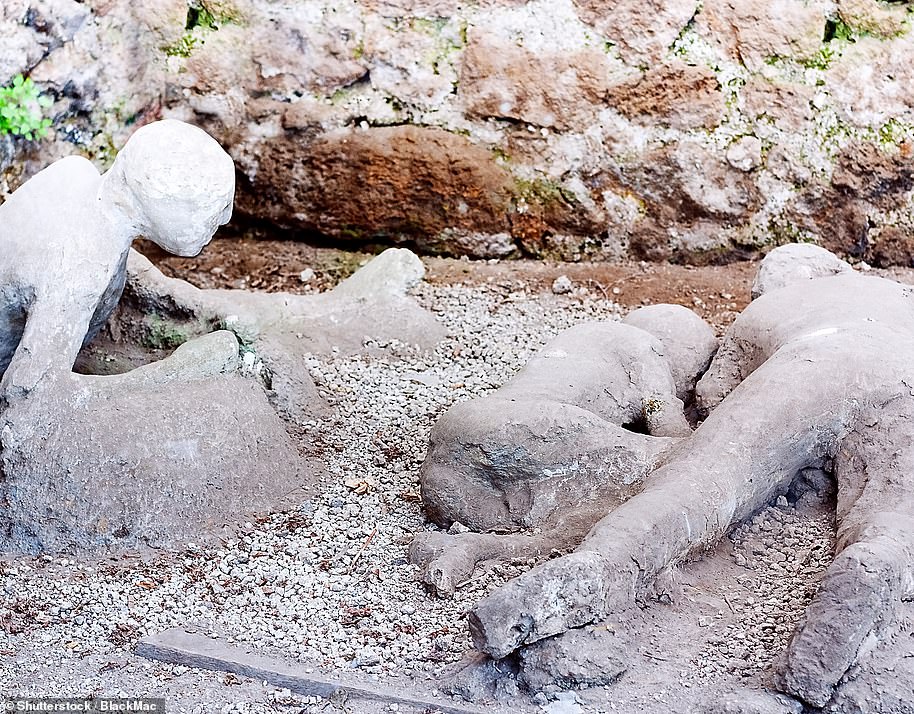 They are more dangerous than lava because they travel faster, at speeds of around 450mph (700kph).

The thermal heat generated by the explosion is thought to be around 100,000 times that of the two atom bombs that destroyed Hiroshima and Nagasaki.

An administrator and poet called Pliny the younger watched the disaster unfold from a distance.

Letters describing what he saw were found in the 16th century.

His writing suggests that the eruption caught the residents of Pompeii unaware.

He said that a column of smoke ‘like an umbrella pine’ rose from the volcano and made the towns around it as black as night.

Mount Vesuvius, on the west coast of Italy, is the only active volcano in continental Europe

People ran for their lives with torches, screaming and weeping, he wrote.

The rapid burial of Pompeii meant that it remained extremely well preserved.

Mount Vesuvius, on the west coast of Italy, is the only active volcano in continental Europe and is thought to be one of the most dangerous volcanoes in the world. It has erupted four times in the past 200 years.

Pompeii’s secrets continue to be uncovered to this day.