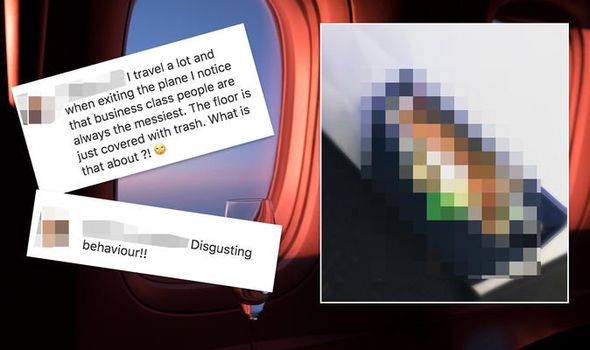 Plane travel often means sitting for a long period of time in very close quarters to your fellow passengers, which can mean passengers are at the peril of their seat mate’s behaviour. However, for an elevated price, travellers can opt for far more personal space and a sense of luxury by purchasing a first class ticket.

While you might expect this to meet a more sophisticated experience, passengers on a flight soon discovered this was not the case.

They were left reeling when they spotted evidence of one first class passenger’s behaviour, dubbing them “self-entitled”, “arrogant” and rude.

The passenger who initially spotted the situation was so shocked they snapped a photo of the remnants and shared them with Instagram account @PassengerShaming.

In the picture, the magazine holder situated on the bulkhead seat of the first class cabin can be seen. 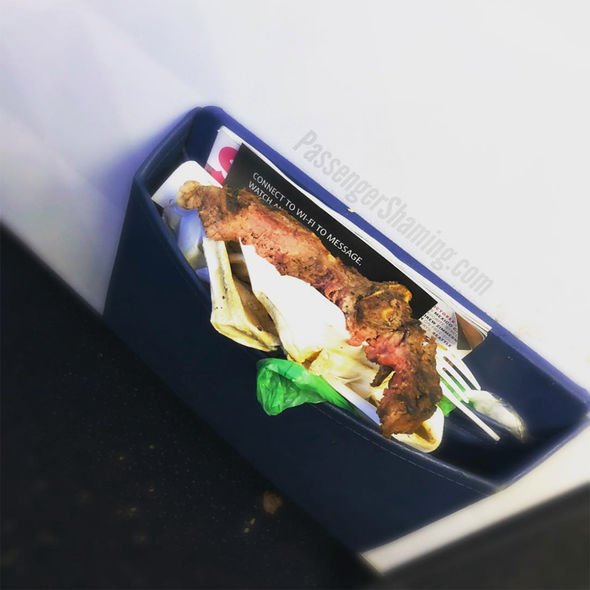 This handy pocket is usually there to store magazines, the safety card, and any small personal times the passenger may have such as a book or electronic device. However, in this instance, it is holding something far more unexpected.

Nestled in the navy fabric of the holder is the aftermath of a T-bone steak which someone has clearly enjoyed chowing down on.

It seems the passenger originally sat here tucked into their steak before leaving the gristly remains in the seat pocket for an unfortunate passenger or crew member to find afterwards.

The image was posted along with the caption: “Yes this is first class.

“Yes, this is (was?) a T-bone steak that someone ate. Yes, they put the bone & remains in the seatback pocket attached to the bulkhead.”

At the time of writing, 472 people have commented on the image-sharing their opinions.

Almost all of them report feeling “disgusted” by the behaviour.

One passenger slated upper-class fliers, saying: “I travel a lot and when exiting the plane I notice that business class people are always the messiest. The floor is just covered with trash. What is that about ?!” 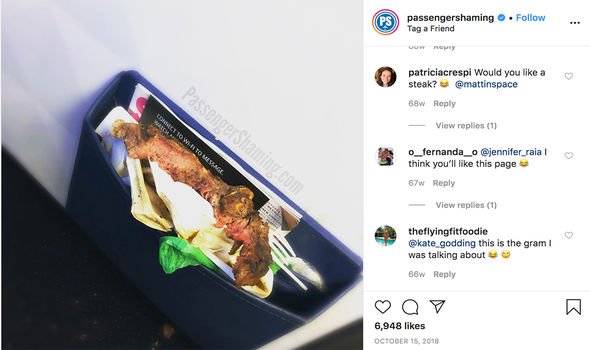 Another commented: “You can buy a first class ticket but you can’t buy class.”

A third suggested: “This looks like the kind of thing that a rude and arrogant person would have done as revenge for some supposed slight by the airline of the crew. Especially if it is in first class!!”

Others labelled the passenger “self-entitled”, “rude” and “Selfish.”

An infuriated commenter said: “For real people are just gross, nasty, have no manners, no education and respect for others!! I can just imagine their houses…”

Others wanted a logistical explanation for why the passenger would ever need to leave the bone there.

“Can someone tell me why did they not eat on their plate?” they asked.

Though the T-bone seems like a truly bizarre finding, it seems it isn’t the worst thing cabin crew and passengers have come across in seat pockets.

An anonymous cabin crew went so far as to suggest the seat pocket is one of the dirtiest places onboard the whole plane. 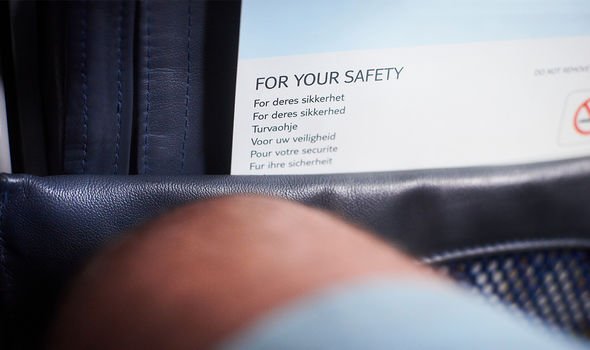 Posting anonymously to Reddit, she said: “I ALWAYS recommend you never, ever, ever, EVER use or put anything in the seat pocket.

“They are cleared of rubbish but are never ‘cleaned’.

“Dirty tissues, sick bags, knickers, socks, peoples feet, gum, half sucked sweets, apple cores… and then next flight you go and put your phone/laptop/iPad in there.”

If you think dirty tissues and leftover gum are disgusting, you could also be faced with more shocking, physical remnants of the passenger before you.

“Finger and toenails. Just… I don’t know why,” she added.