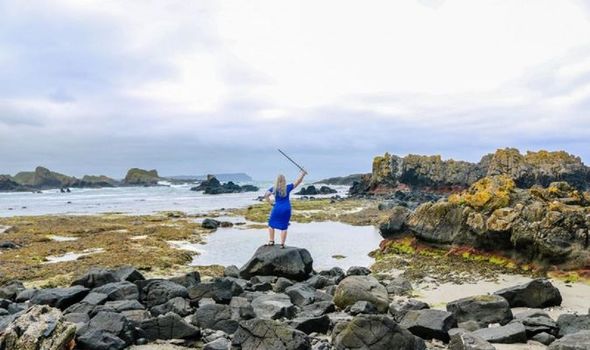 Most Thrones fans will know that many of the iconic Game of Thrones scenes were shot in Northern Ireland. Around 80% of the popular series was filmed there. Rich in enchanting landscapes, atmospheric hills and raging seas, it’s the ideal rugged location to film a fantasy series. There are several key locations in Northern Ireland where iconic GOT scenes were shot and several Thrones tour companies have sprung up to transport keen fans to follow in the footsteps of their favourite characters.

Fans can choose from a range of bespoke Game of Thrones tours in Northern Ireland, including former cast and crew with insider stories and tales from the set. There are tours for foodies and cosplay fans where you banquet like a Baratheon or become an archery pro in Winterfell. Alternatively, visitors can hire a car and take a self-guided tour of locations.

Northern Ireland is further capitalising on film tourism with immersive features such as the Glass of Thrones trail in Belfast. To celebrate 10 years of filming in Northern Ireland, Tourism Ireland created six giant, stained glass windows depicting some of the most iconic scenes from Game of Thrones that fans can visit and take snaps of.

The Game of Thrones Studio Tour at Linen Mills Studios in Banbridge is also inching ever closer to an opening date. Since the iconic TV show made Northern Ireland its home, fans and visitors have been arriving to explore the Home of Thrones in huge numbers. 2018 visitor figures suggest that Game of Thrones helped to attract one in every six out-of-state visitors to Northern Ireland which amounts to approximately 350,000 people and over £50 million into the local economy in that year alone.

Chief executive of Tourism Northern Ireland John McGrillen said: “Throughout its entire production, Game of Thrones injected a staggering £251 million into our economy. Northern Ireland Screen, the lead agency for our film and TV production sector, recognised the international appetite for the show at an early stage and, together with Tourism Ireland, have collaborated with Tourism NI to strengthen the show’s potential as a tourism driver.

“There is no doubt Northern Ireland has been on a remarkable journey with Game of Thrones. In less than a decade, we’ve undergone an extraordinary makeover as an international screen tourism destination. This epic journey will continue with the new Game of Thrones Studio Tour® at Linen Mill Studios, Banbridge, the first permanent licensed Game of Thrones experience in the world.”

Mr McGrillen is confident that being the real-life home of the most successful TV show in history will continue to reap benefits for Northern Ireland for years to come. Here are some of the key locations that fans can visit in Northern Ireland, in search of the Iron Throne.

The Dark Hedges is an enchanting avenue of beech trees along Bregagh Road between Armoy and Stranocum in County Antrim. It has a real ethereal vibe and was used as a filming location for Kings Road in Season 2 when Arya and Gendry escape King’s Landing in the back of a cart.

When Storm Gertrude wreaked a path of havoc across Northern Ireland in 2016, she destroyed some of the iconic Dark Hedges beech trees.

Tragedy turned to artistic triumph as the fallen trees were repurposed into the impressive Journey of Doors. 10 intricately crafted doors have been expertly carved from the fallen wood, each telling the story of an episode from Season 6 and displayed across the country.

Ballintoy Harbour is a historic and charming harbour that’s a crabbing hotspot as well as a Thrones filming location. This unique area was used as a location for one of the Iron Islands Pyke, the home of Theon and Yara Greyjoy.

In A Song of Ice and Fire, Pyke is described as an island rich with mines containing iron, lead and tin.

Due to its craggy landscape, Ballintoy Harbour was considered to be the perfect location to recreate the beguiling Westeros island.

Winterfell and The Haunted Forest

On the shores of Strangford Lough in County Down, Castle Ward Estate provided some of GOT’s most recognisable locations. The historic farmyard stood in for parts of Winterfell, including the archery range where the Stark children practised their skills.

Winterfell Tours take fans to the castle and demesne and kit them up with a range of GOT inspired costumes. Tour guests can expect to be dressed in what Vogue would undoubtedly describe as ‘Signature Stark’, where the season line is always ‘Winter’ and given sword accessories to pose and duel with.

On this immersive tour, Get your photo taken peering through the castle window Bran Stark was pushed from and fire arrows in the Winterfell Archery Range Film Set.

Within the Castle Ward demesne, you can also make your way over to Audley’s Field where Robb Stark meets Talisa after the battle at Oxcross.

A short drive away is Inch Abbey beside the River Quoile. Both locations were used – the abbey as Robb Stark’s camp at Riverrun, and the riverbanks as the perfect spot in Season 3’s “Walk of Punishment” episode and a Tully funeral scene.

In the Mourne Mountain foothills, you’ll find Tollymore Forest which doubles as the Haunted Forest in the opening season and is where the direwolves are found.

The Cushendun Caves provide the ideal supernatural setting for Storm’s End. These 400-million-year-old caves are a still and slightly eerie part of Northern Ireland’s coastal landscape and served as a key location for some of the Baratheon homeland scenes.

They are the location where Melisandra gives birth to the infamous ‘shadow baby’ in a rather harrowing scene.