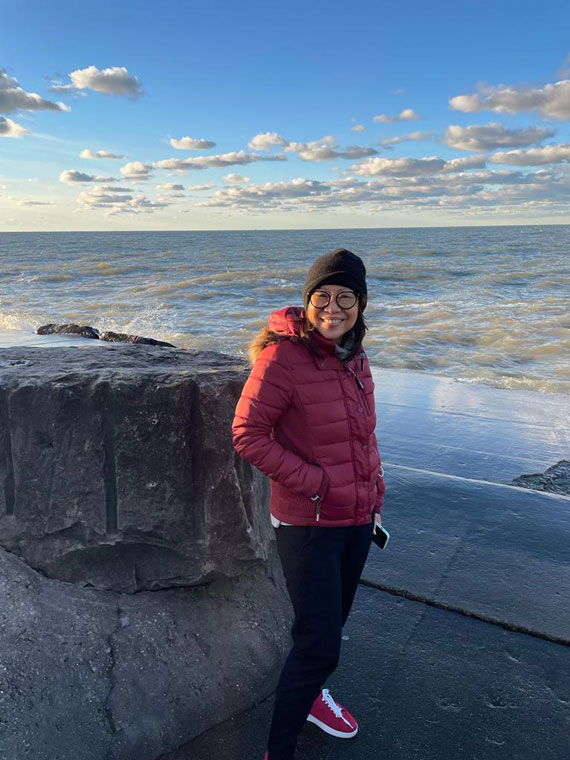 What I like about Cleveland is how spread out and low-rise it is, with only a handful of skyscrapers jutting out into the big blue, wintry sky. After New York and Miami, I appreciate the distinctly small-town feel to this city. It’s quiet, laid-back, perfect for those seeking a slower pace of travel.

I visit an area called the Flats, a redeveloped area on the banks of the Cuyahoga River, known for its happening nightlife. But at this time of the year, on a Thursday evening, not much was happening. You can also catch live theater at Playhouse Square and as one of Broadway’s premier touring partners, the theaters here do get a good variety of plays, musicals and concerts — minus the crowds in New York.

For dinner, we try out the Flying Fig, which is tapping into the global farm-to-table trend. Its menu lists the farms from which it gets its produce. Its food is fusion-like: I have shrimp on a skewer with garlic aioli and pan-seared trout with red curry sauce and rice. Mix of Spanish and Thai in Ohio — isn’t that why we travel?

For nature, you can immerse yourself in Cuyahoga Valley National Park. The winding Cuyahoga River gives way to deep forests, rolling hills and open farmlands. Just wrap up warm for winter walks and all that fresh air and nature should blow all your worries away.

Beyond the big city of Cleveland, there are the small towns to explore, and at each — whether it be Hudson or Marysville or someplace else — I felt all the novels I had read by authors such as Anne Tyler and Wally Lamb come alive. Celeste Ng’s “Little Fires Everywhere” is based in Shaker Heights, Ohio, right outside Cleveland. Ng lived there from 1990 to 1998.

At Marysville, I visit the global headquarters of Honda, just to appreciate the impact such a company can have on a local community. It’s massive, almost a city unto itself, and I am told it is responsible for more than 14,000 jobs in the area. This is where the automotive giant does its research and development, and testing, to create the future of cars.

Even as it embraces progress, this is a town that also cares for its heritage. In the town, community leaders have taken it upon themselves to save and restore the town’s historic Avalon Theatre, which was built in 1936 and was the focal point for arts and culture until it closed its doors in 2009 and fell into disrepair. Today, a $3.2 million restoration project is underway to revitalize the cultural landmark.

Ohio is also home to the largest Amish population in the U.S., about 60,000, and I had been looking forward to having pie in Plain City, it being the most touristy thing one can do there. However, it being a Sunday, that activity was off the table. I did end up having the best homemade apple pie I’ve ever had in a friend’s home — and that’s the charm of Ohio, from its big, small city of Cleveland to its small towns.

They are big in heart, heritage, hospitality and rock ‘n’ roll.