Monday’s positive news of the success of the Pfizer/BioNTech vaccine trial has given a boost to the struggling travel industry, with tour companies and online travel agents reporting an immediate surge in inquiries and bookings for next year.

Flight and accommodation website Skyscanner reported an “immediate spike” in online traffic, with searches for holidays next spring and summer up 48% on the previous week. Particularly popular were searches for Mediterranean summer beach holidays and Easter ski trips, as well as the Canary Islands, the Maldives (perhaps partly because its travel corridor remained in place through much of the summer) and stalwarts such as New York and Florida.

After hearing the news, Tricia and Cyril Hamill from Portsmouth, both 75 and retired, booked a week in Corfu with tour operator Sunvil for May 2021.

“We had been wary about booking something for 2021 but decided to take the plunge now things are looking more positive,” said the couple. “It feels important to have something to look forward to during the lockdown.”

The Hamills aren’t alone. CV Villas, which operates across Europe and the Caribbean, saw a 76% increase in searches compared with the previous Monday, plus a 40% increase in bookings. “We are confident that news of a vaccine will have a huge positive effect on customers’ confidence to travel,” said managing director Tristan Symondson. “Prices haven’t inflated hugely yet, but holidays are starting to sell fast.”

The Pfizer announcement, and health secretary Matt Hancock’s subsequent suggestion that vaccination of at-risk groups could begin this year, with mass vaccination in the first half of 2021, also prompted a sharp recovery in airline and travel company shares: easyJet’s value rose by 40% in 24 hours.

Travelsupermarket saw a 54% rise in searches compared with the previous week. Spokeswoman Emma Coulthurst said it seemed families were planning to get away in April 2021, by which time it was hoped a testing regime would be in place to allow travel, even if the vaccine hadn’t yet become widely available.

“An EU-wide system of coordinated testing and health and safety measures is needed – and quickly – to enable travel to be opened up again to destinations where incidences of the virus are low,” said Coulthurst.

Of its top 10 most popular destinations for late 2020-21, the Maldives was the only one outside Europe; also on the list were the Canaries, Antalya in Turkey, Cyprus, Venice, the Algarve and the Costa Blanca.

British Airways and British Airways Holidays saidthey had seen a significant rise in people looking for holidays to the Maldives, as well as the Canaries and Caribbean, along with flights to New York, Florida and Dubai. Club Med, which saw a significant 25% uplift in traffic and booking inquiries compared with the previous week, said its most-searched destinations were the Maldives and the French ski resort of Val Thorens.

After a summer of on-off travel corridors and lockdowns, booking anything other than a last-minute trip might seem risky, but operators and agents said pent-up demand means that bargains available now are likely to disappear rapidly once further details of a vaccination programme emerges. It remains crucial, of course, to check that trips are fully refundable in the event of restrictions continuing.

“The first travellers out of the blocks will probably be people looking for a short-haul beach holiday, to just chill out after all the trauma of recent months,” said Derek Moore, deputy chair of the Association of Independent Tour Operators (Aito). He said rising air fares could push up the prices of holidays in 2021. “There’s likely to be less choice and fewer flights available than pre-pandemic, which may force prices up. ”

Michael Vinales, managing director of Olympic Holidays, said there were currently some “amazing value deals to be had for summer 2021”, such as a week at a five-star B&B in Fuerteventura from £679pp including flights from Gatwick – £200 off the usual price for May. Most likely to sell out first were smaller Mediterranean islands with limited availability, such as Halki, Symi, and Santorini, he said. 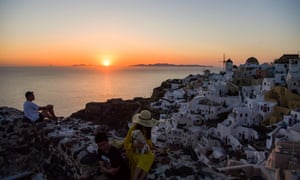 It’s also a good moment to make reservations for Eurostar, which currently has low-fares available for the peak weekend before Easter on the London-Paris route, from £44.50 one-way, and has plenty of availability for its lowest “lead-in” fares of £39 each way for London to Paris and Amsterdam in March and May. Travelsupermarket said its best deals were to Fuerteventura and Tenerife in December; Krakow, Budapest and Barcelona in January; Mallorca, Ibiza, Warsaw and Berlin in March; and Antalya, Corfu and the Algarve for summer 2021.

Those looking to secure the best deals on flights should make their bookings on a Sunday, said Expedia, when they were typically 17% cheaper than bookings made on Fridays, with the cheapest day to depart in any given week usually being Thursday.

Skyscanner said prices for travel in 2021 were much cheaper than usual, with flights to Spain in April for £10 each way for example.

CV Villas is offering complimentary car hire on all villa bookings made in November, while Much Better Adventures, which specialises in outdoorsy mini-breaks, recently added lots of new trips for 2021-22, with a 5% discount for the first four people to book each, plus free date changes or full refunds if trips are cancelled. It said countries that appeared to have handled the pandemic well, such as those in Scandinavia and eastern Europe, were proving popular.

Although the travel industry was feeling positive after the vaccination news, some feared travellers would remain cautious for some time. A spokeswoman for Opodo said: “Once borders open, bookings follow suit, but we see that customers are increasingly likely to book last minute, and the demand for flexibility prevails.”

It is hoped the government’s Global Travel Taskforce, expected to report back next week on measures to get travel opened up again, will bring more good news.