Inside the spellbinding new Harry Potter-themed Airbnb that features Hogwarts-inspired bedrooms, a ‘Quidditch pitch’ and a Forbidden Forest cinema room

Don’t forget to pack your wand and broom if you plan on holidaying at this magical property once the lockdown eases – an incredible new Harry Potter-themed Airbnb.

‘Wizard’s Way’, a 30-minute drive from the Universal Orlando Resort in Florida, will leave fans of the J K Rowling books and Warner Bros movies spellbound.

A regular-looking detached house on the outside, but a mini magic kingdom on the inside, the rental carries off the Harry Potter theme in breathtaking fashion. There are bedrooms with secret doors inspired by the Hogwarts Houses, a Whomping Willow, a Quidditch pitch games room and even a cupboard under the stairs that mimics Harry’s room at 4 Privet Drive. 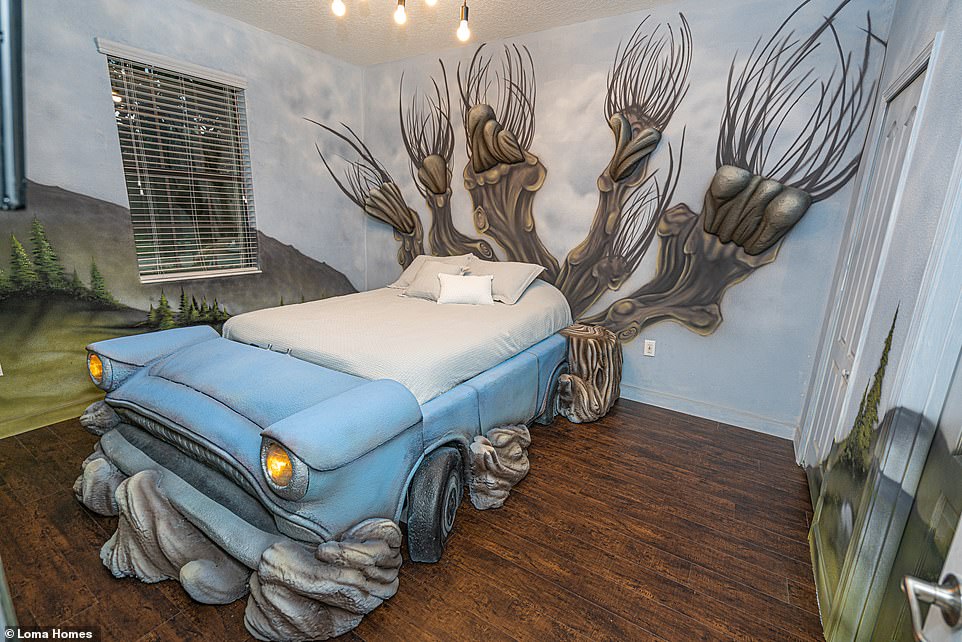 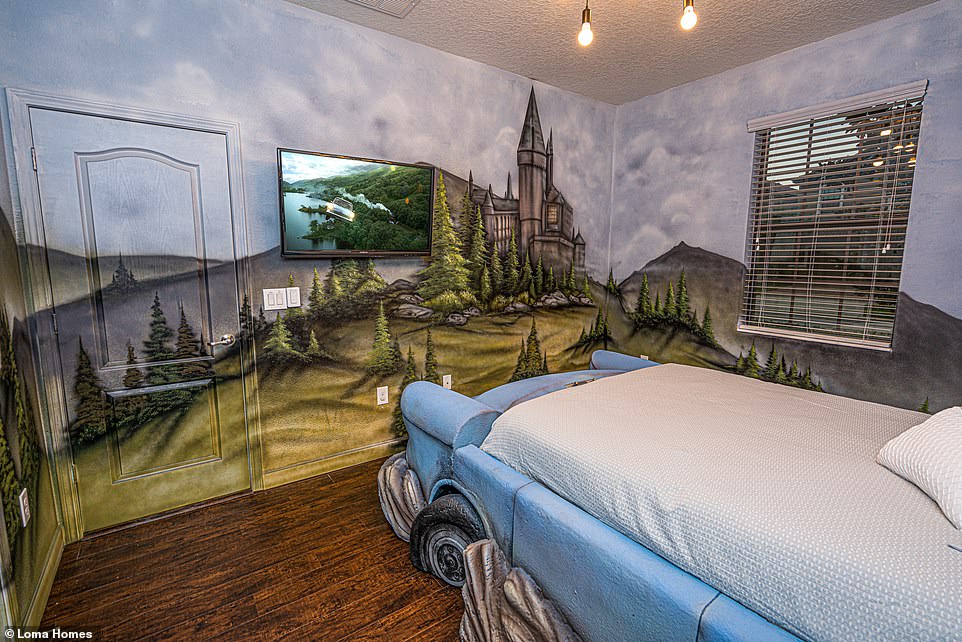 On the wall behind the bed is a stunning mural of the Whomping Willow that the wizards crash into upon arrival just before the car, owned by Ron’s dad, pootles off into the Forbidden Forest. The wall in front of the car features a stunning Hogwarts scene 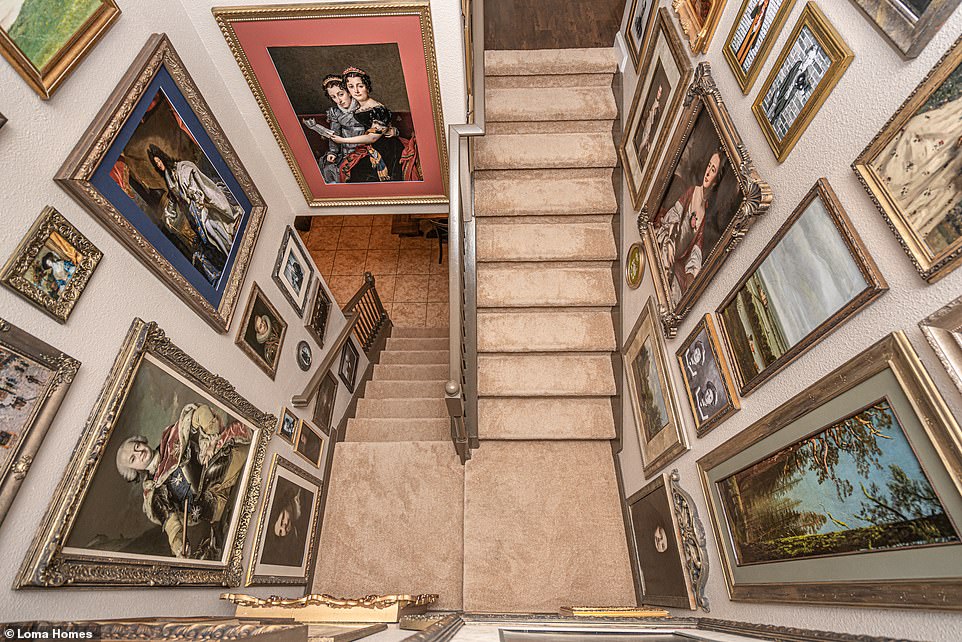 Feeling watched? In the wizarding world, every painting is magically alive in its own way 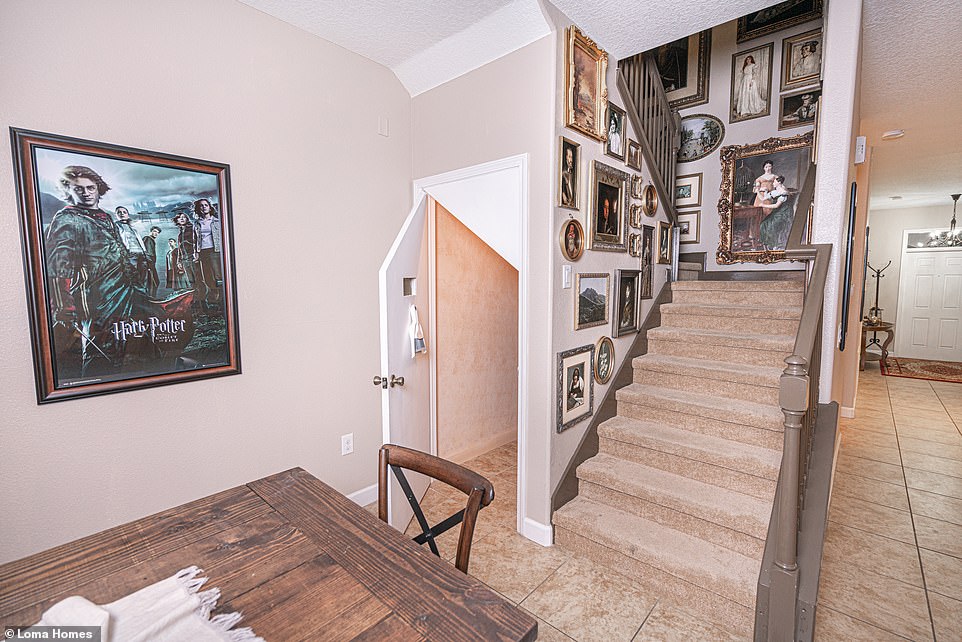 What did you expecto? There’s even a cupboard under the stairs that mimics Harry’s room at 4 Privet Drive 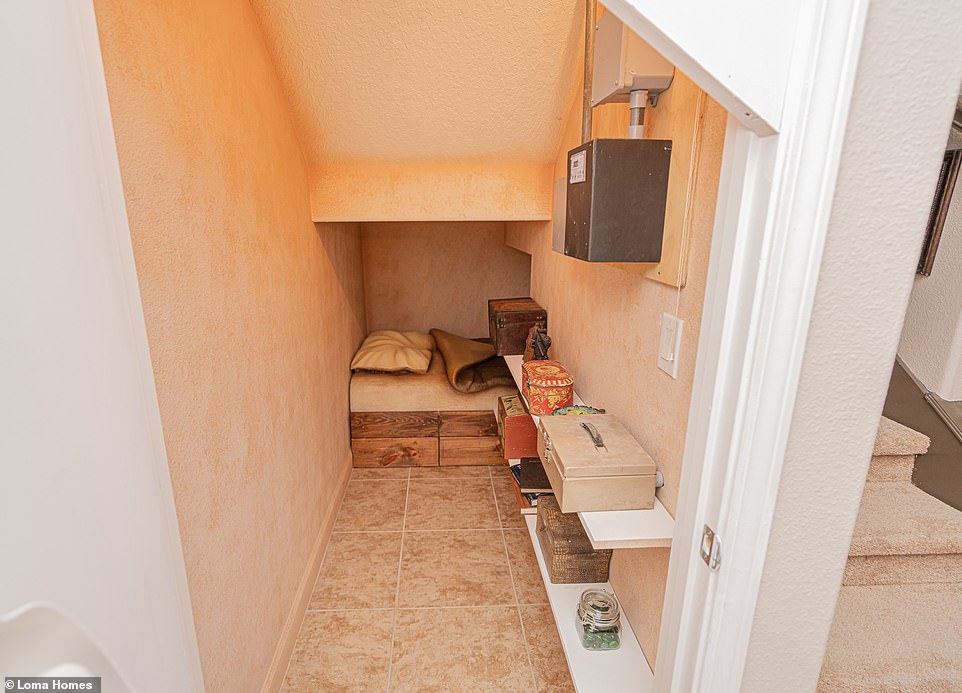 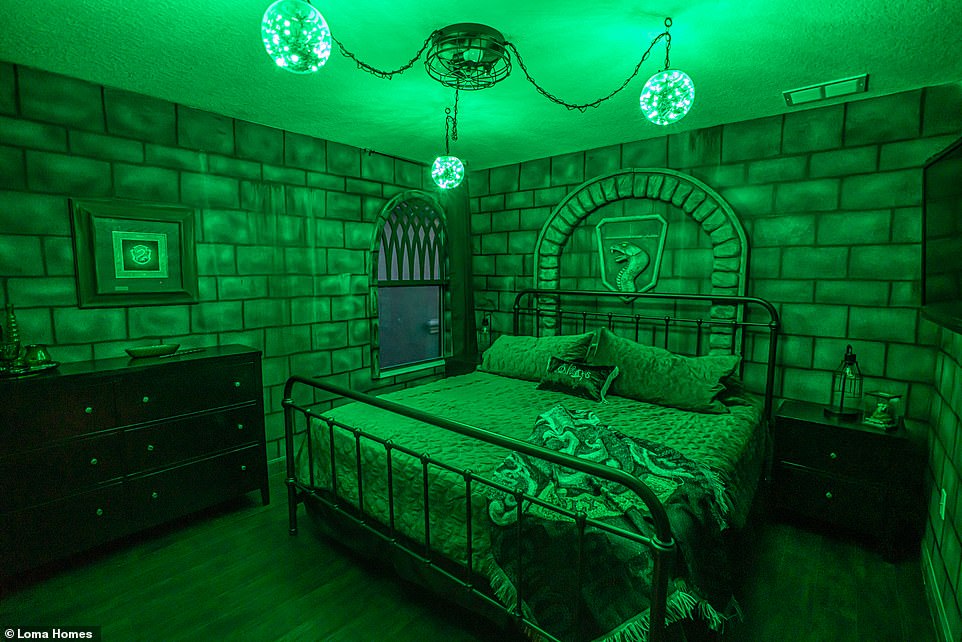 Sssleep tight: This eerie Slytherin-themed bedroom comes complete with a serpent behind the bedhead and mysterious green lighting

For those looking for more comfort, there are eight proper bedrooms upstairs.

One of the most impressive features a bed modelled on the magic flying Ford Anglia that Harry and Ron use to get to Hogwarts when the entrance to Platform 9 3/4 was sealed shut in The Chamber of Secrets.

On the wall is a stunning mural of the Whomping Willow that the wizards crash into upon arrival just before the car, owned by Ron’s dad, pootles off into the Forbidden Forest.

Another bedroom replicates platform nine and three-quarters in Kings Cross Station in London, where Harry and the rest of the students dissolve into a wall to board the Hogwarts Express. 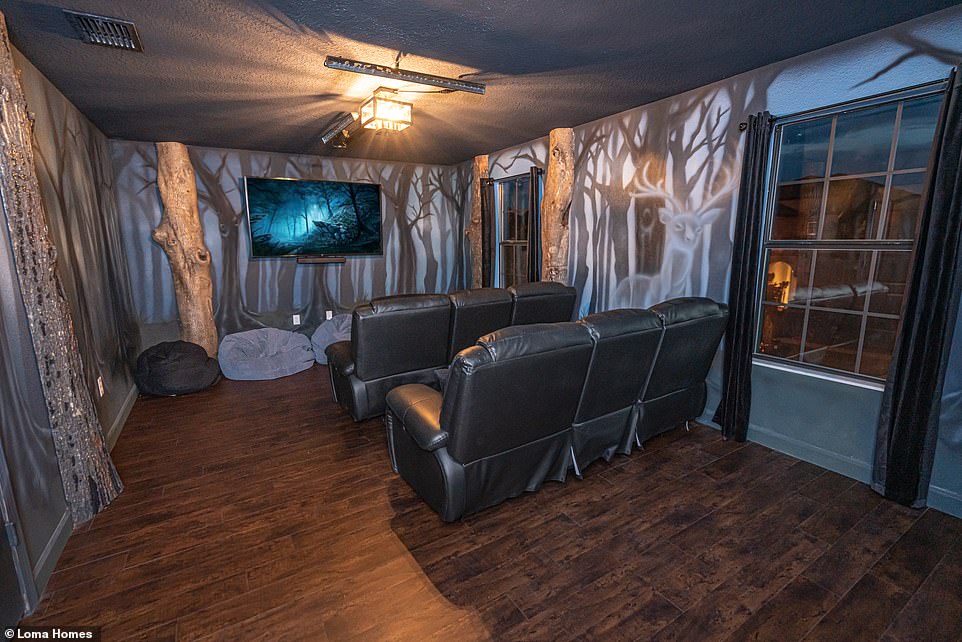 The cinema room transports movie-goers to the Forbidden Forest, with faux tree trunks running from floor to ceiling 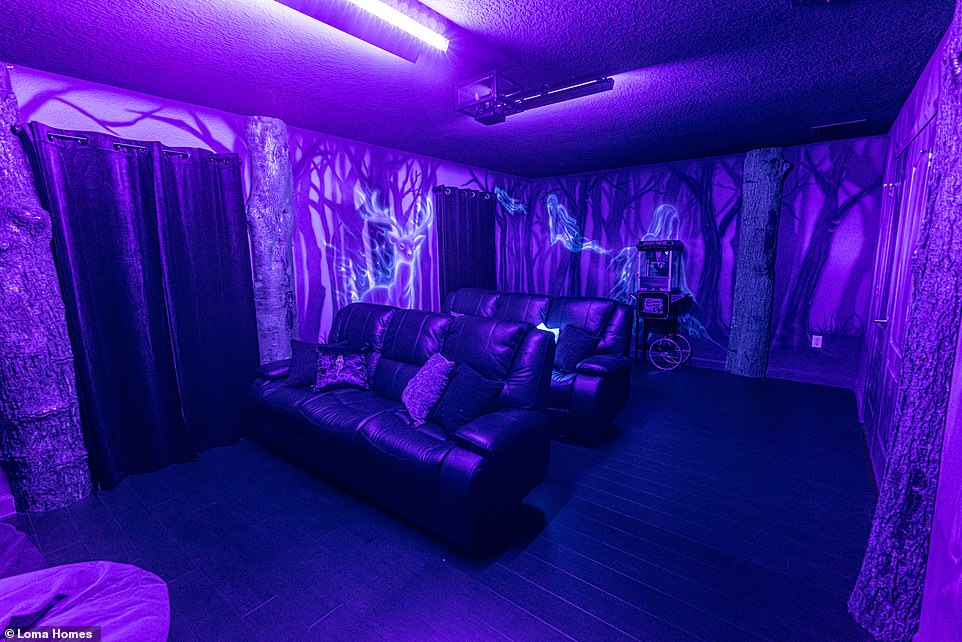 When a UV light is switched on in the screening room a white stag, which appears as Harry’s Patronus charm, emerges, along with a group of ghostly Dementors 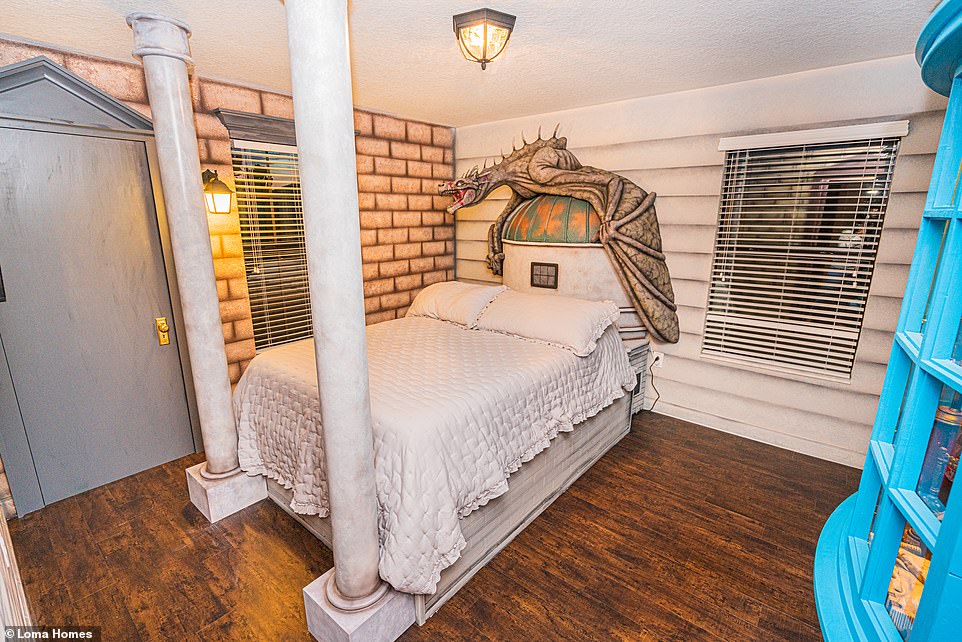 Aloho-snore-a: One of the bedrooms features a bedhead modelled after the rounded facade of Gringotts Wizarding Bank, with the Ukrainian Ironbelly dragon, as seen in Harry Potter and the Deathly Hallows: Part Two, perched on top 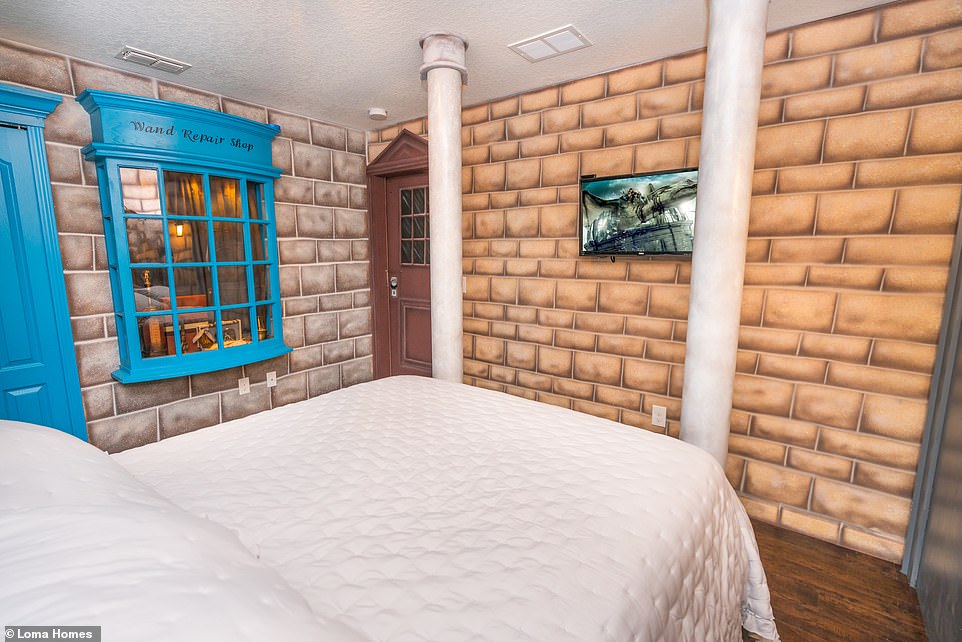 Along with a fire-breathing dragon, the Diagon Alley bedroom features a window display inspired by Olivander’s wand shop 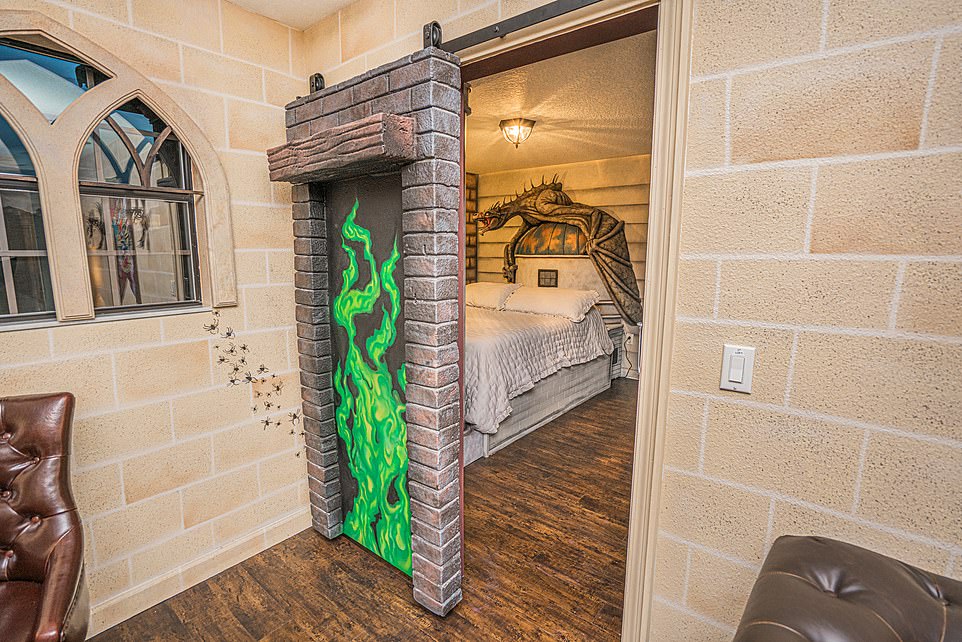 Wizarding details can be found in every nook and cranny. Spot the Chamber of Secrets spiders scuttling up the wall here, next to the secret Diagon Alley bedroom door 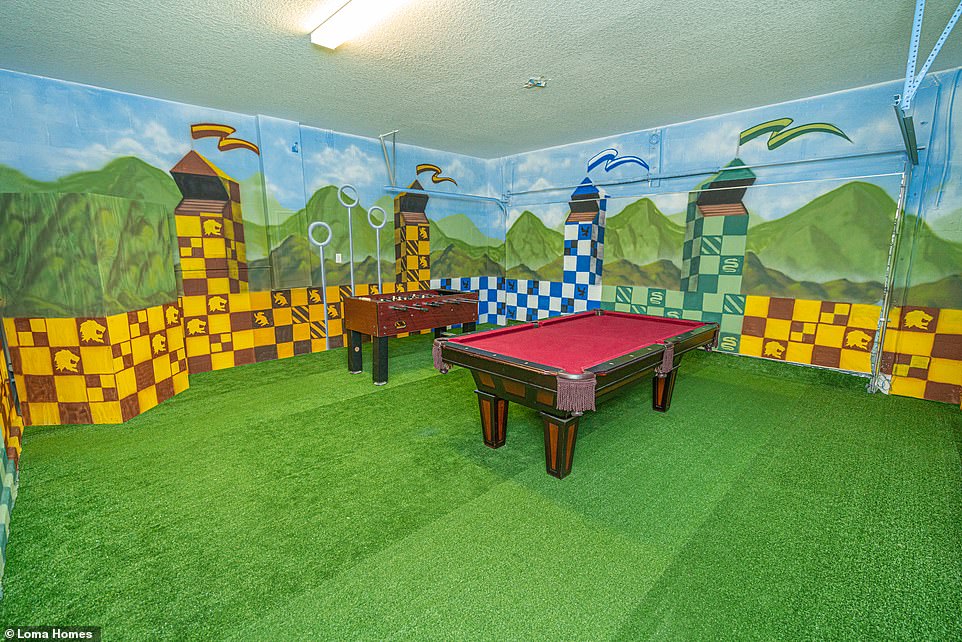 Having a ball! The games room in the house was inspired by the Hogwarts Quidditch pitch

The bed replicates what is surely now the world’s most famous steam train and just to the side is Harry’s luggage trolley, complete with owl Hedwig in a birdcage, jutting out of the wall.

A less endearing creature lives in another bedroom – a fire-breathing dragon.

The scaly beast is depicted behind the bedhead, perched atop Gringotts Wizarding Bank – a moment inspired by a scene in Harry Potter and the Deathly Hallows: Part Two.

The four other bedrooms are inspired by the Hogwarts school houses – Slytherin, Hufflepuff, Gryffindor and Ravenclaw. Guests might want to pop on the Airbnb’s resident Sorting Hat to decide which room they’d be best suited to.

On the entertainment front, there is an eye-catching cinema room that transports movie-goers to the Forbidden Forest, with fabulous faux tree trunks running from floor to ceiling. 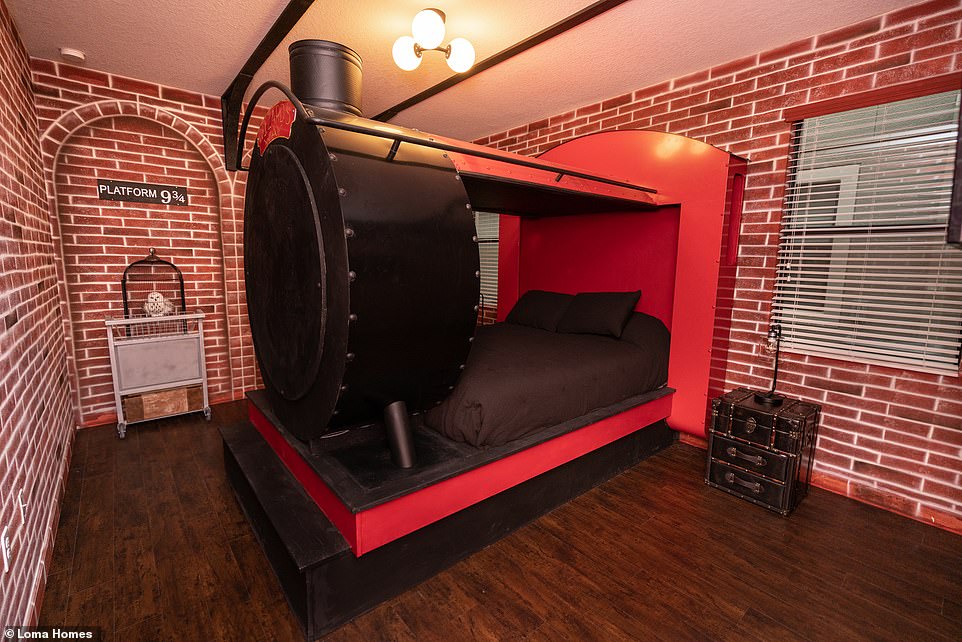 Wizard in train-ing! One bedroom is modelled after the fictional Kings Cross train platform – 9 3/4 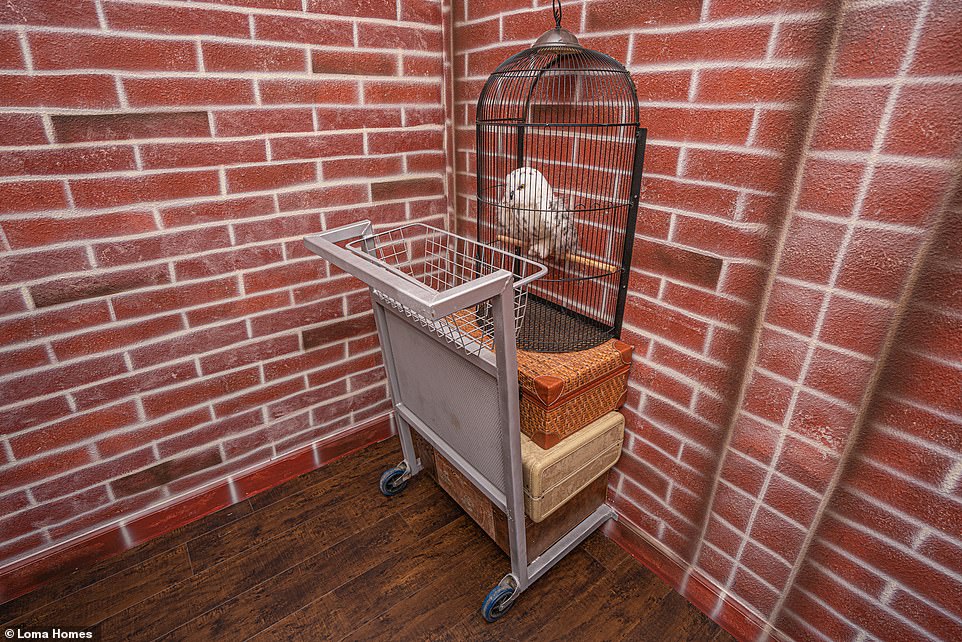 The Hogwarts students have to run through a section of brick wall between platform nine and three-quarters and platform 10 to get to the Hogwarts Express. The train station-themed room at Wizard’s Way even features Harry’s trolley as it disappears through the bricks, complete with his pet snowy owl, Hedwig 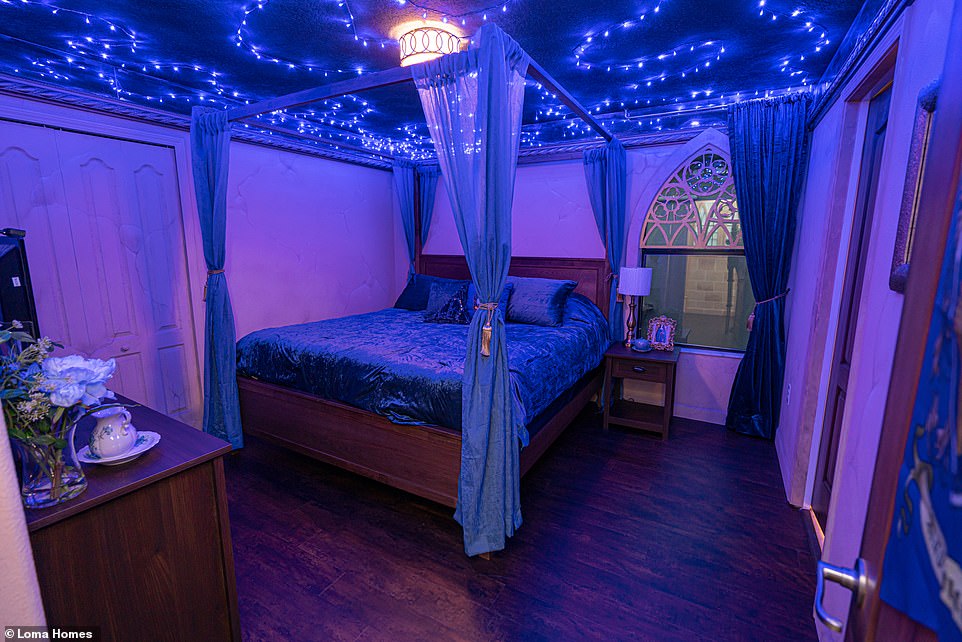 Would you consider yourself wise and witty? Then this blue Ravenclaw-themed room might be for you 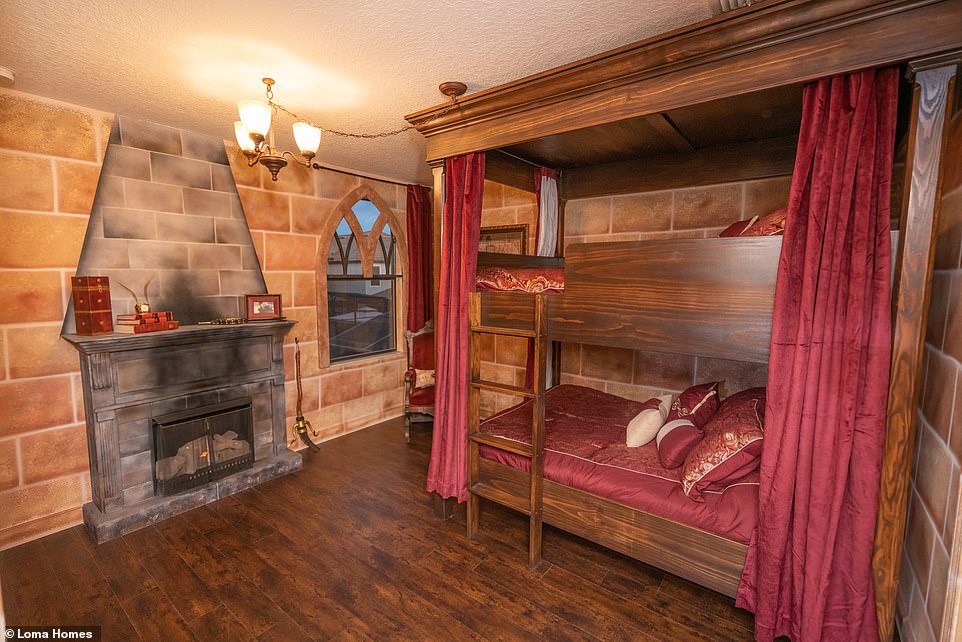 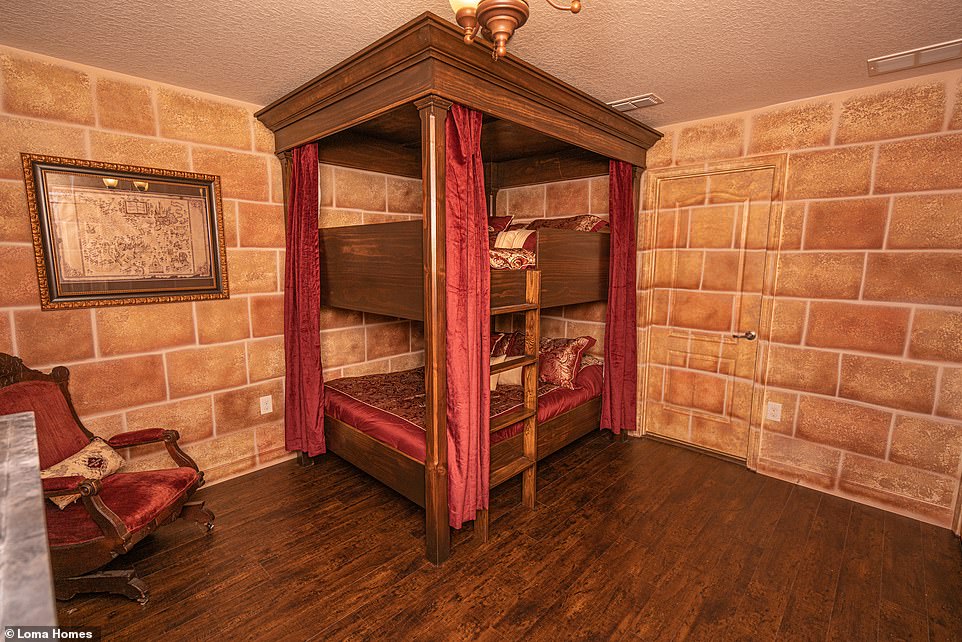 It took about two months for the Harry Potter styling to be completed. This photo shows the Gryffindor bedroom from a reverse angle

When a UV light is switched on a white stag, which appears as Harry’s patronus charm, emerges, along with a group of ghostly Dementors.

There’s a games room, too, inspired by the Hogwarts Quidditch pitch, with mountainous scenery painted on the walls, colourful house flags and faux grass instead of carpet.

Outside, meanwhile, there is a giant chess set where gamers can imagine themselves caught in a game of Wizard’s Chess, as seen in Harry Potter and the Philosopher’s Stone.

And to unwind after a flurry of wizarding action there is an outdoor pool and hot tub.

The property also boasts five bathrooms, a large living room, a dining room fashioned after the Great Hall and a state-of-the-art kitchen where wizarding treats such as Hagrid’s tooth-breaking rock cakes, pumpkin pasties and Petunia Dursley’s ‘masterpiece of a pudding’ can be rustled up. 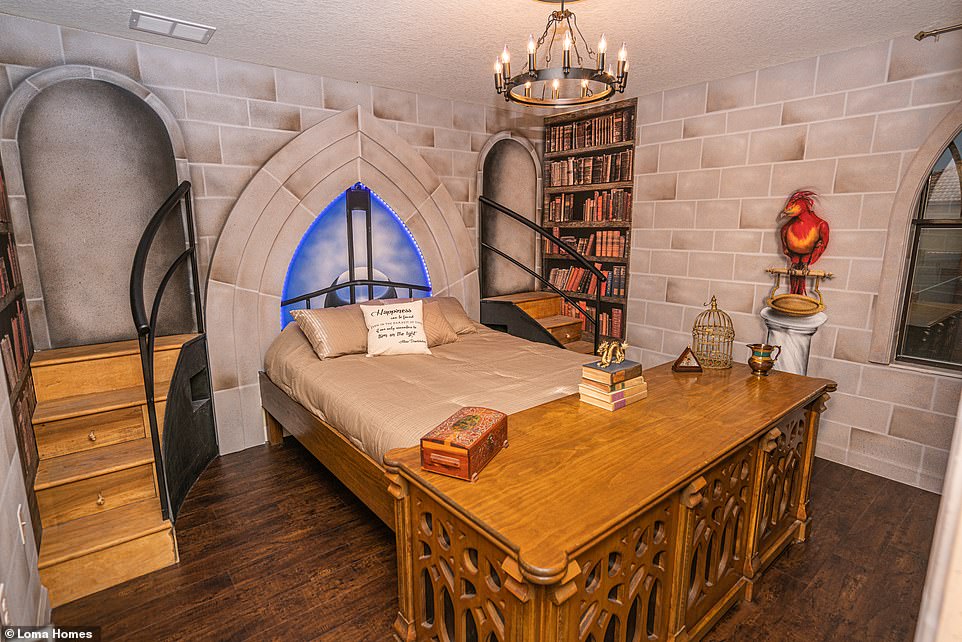 Headmaster suite! Harry Potter movie fans will no doubt recognise this as a recreation of Professor Dumbledore’s study, complete with Fawkes the phoenix, bookshelves, staircases and chandelier 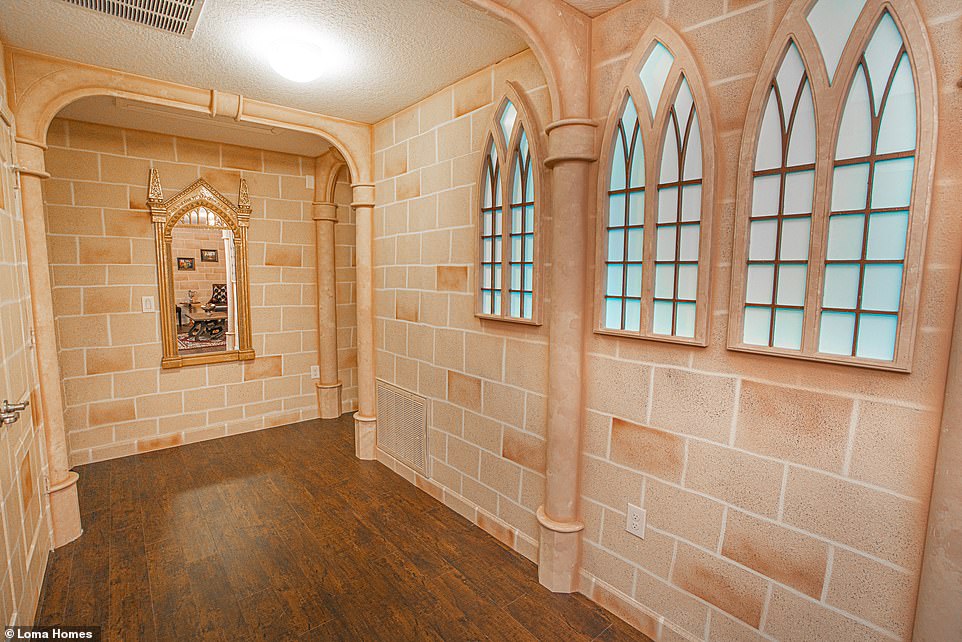 The hallways are full of handcrafted details, with mock windows, arched pillars and mock brick wallpaper 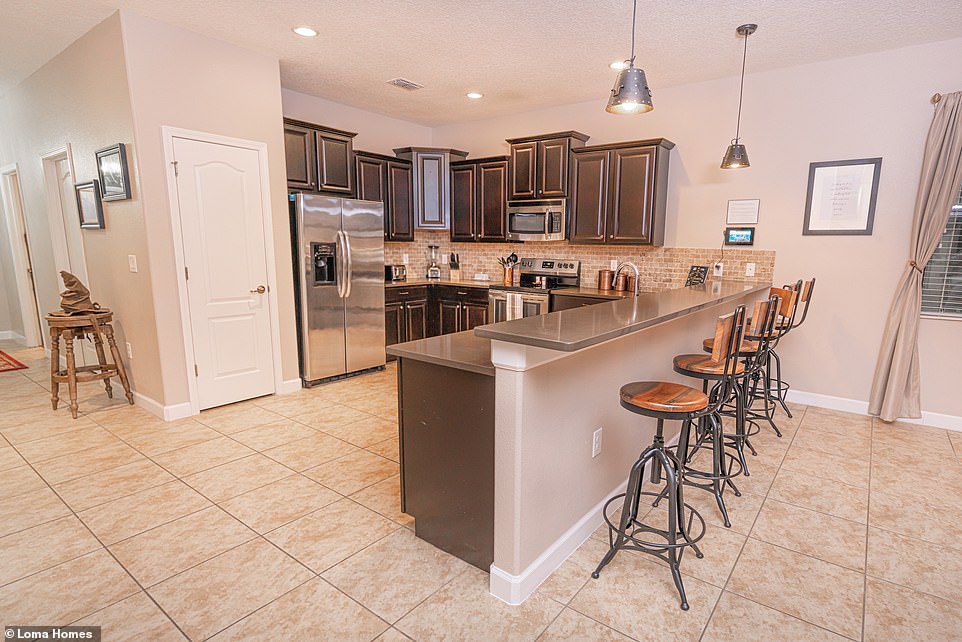 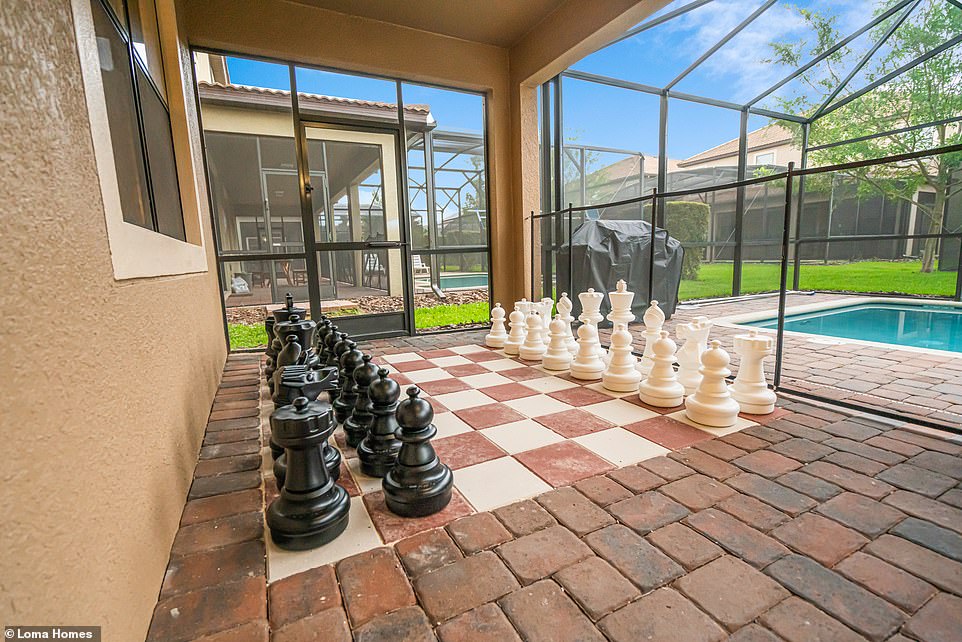 Fancy a game of Wizard’s Chess? Thankfully the chess pieces at the Airbnb are a little less sinister than the ones in Harry Potter and the Philosopher’s Stone 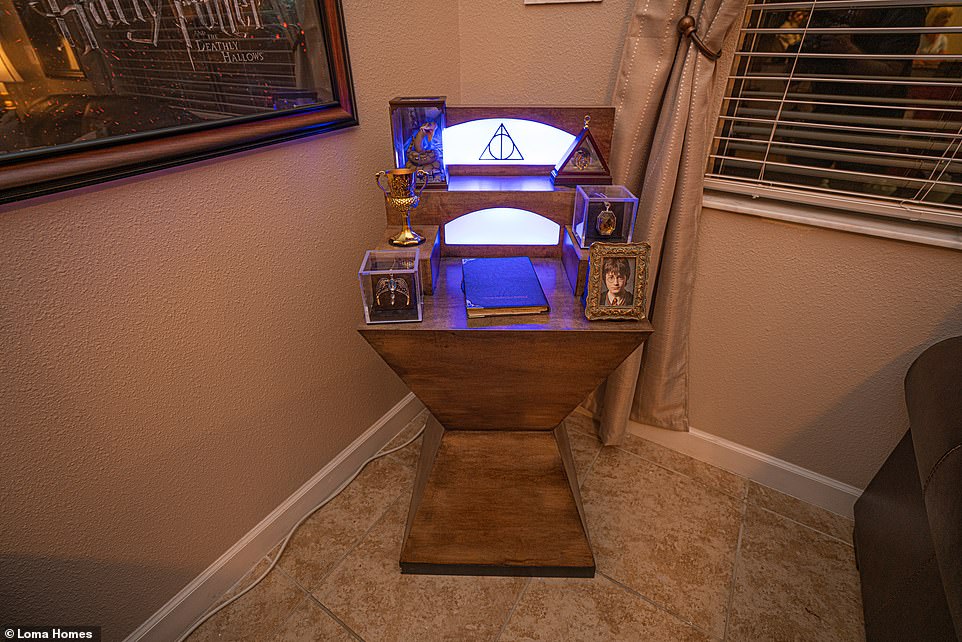 The Airbnb listing says cryptically of this image: ‘The house is hiding 7 enchanted objects. Find them and return them to this podium to defeat the Dark Lord’

Jeff Brown, a managing partner at Loma Homes, said of the Harry Potter-themed abode: ‘It took about two months from the point of purchasing the house at the beginning of April to complete renovations and staging that finished at the end of May.

‘Since we’ve only had the property listed for about three days we have not had anyone stay there yet.’

The property has currently received bookings for July and August.

The listing notes that ‘another layer of magic’ is added by the rental being located within a resort complex called Champion’s Gate.

The house can sleep up to 16 people, with prices starting from around $405 (£323) per night. For more information click here. The FCO currently advises British nationals against all but essential international travel. 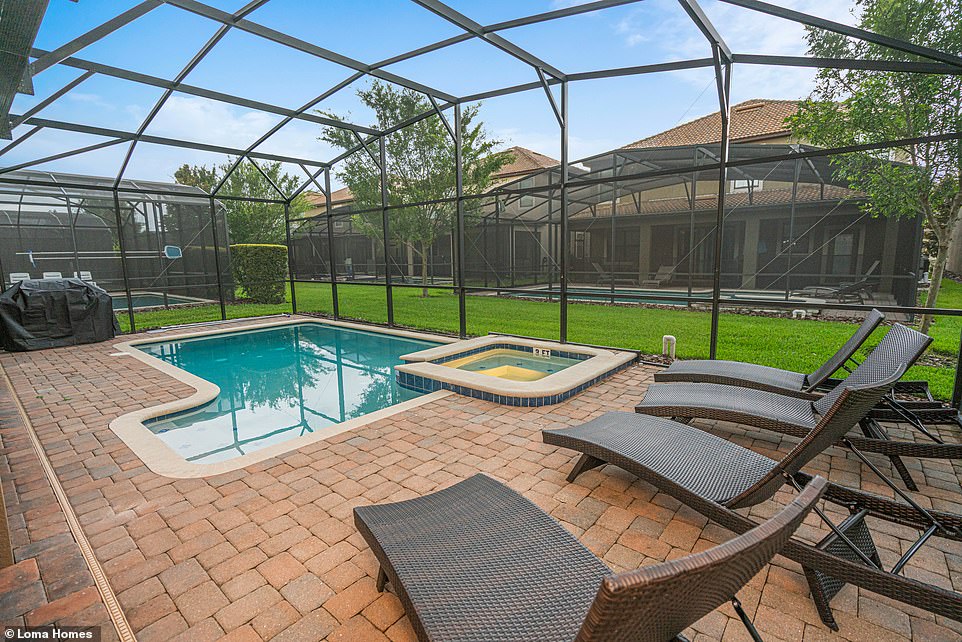 The bubble-head charm, used by Cedric Diggory and Fleur Delacour to survive underwater in Harry Potter and the Goblet of Fire, could come in handy down at the property’s private heated pool and hot tub 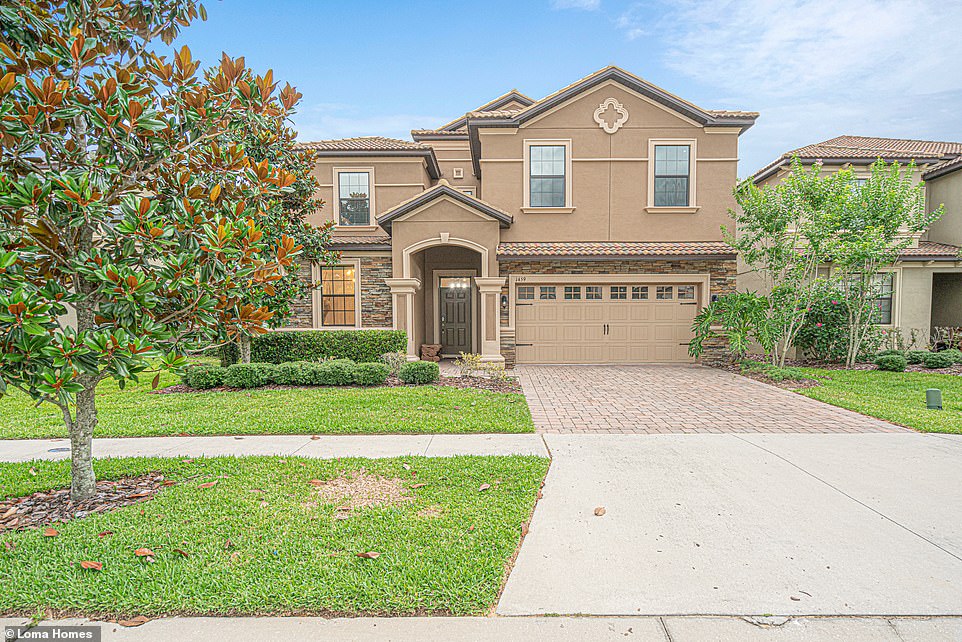 A regular-looking detached house on the outside, but a mini magic kingdom on the inside 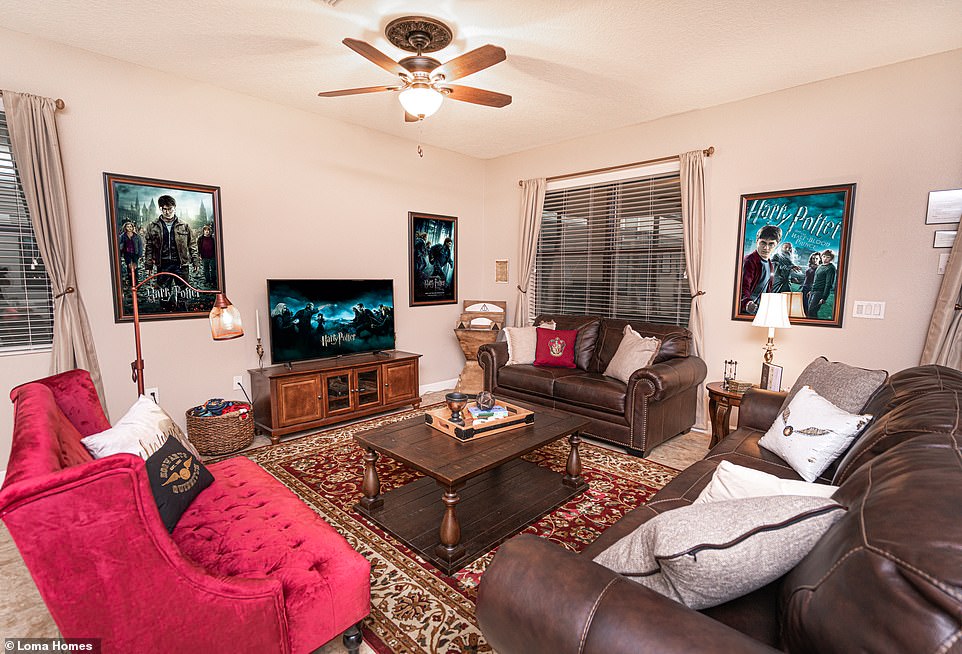 The Harry Potter theme continues to the living room, which features pillows with Quidditch motifs