Arriving at Birch, you would be forgiven for thinking you were headed to a service station. Close enough to the M25 that the constant thrum of cars provides a blanket backdrop of noise, the presence of an imposing Georgian mansion at the end of a dirt track turn-off comes as a surprise. There are no fruit machines or KFC here.

A longstanding hotel and conference centre near Cheshunt, the imposing 22-hectare, Grade II listed property has been the subject of a radical makeover by Chris Penn, former managing director of US brand Ace Hotels. The Birch ethos, Penn told me, is to “give a shit”, to be “accessible,” to be “a festival at a hotel” or, perhaps, not even be a hotel at all. Rather, a space for “escape artists” – those wishing to get away from the relentless pace of London, located only a 30-minute train ride north from the capital. 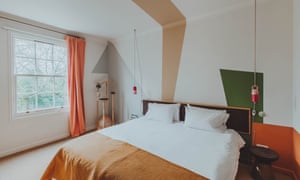 What do these awkward aphorisms mean outside of investor pitch meetings? At first glance, it means an effective marketing strategy – one that has seen Birch fully booked for every weekend in August and filled with 4×4-driving families, Lululemon-legged groups of friends and young couples theatrically photographing each other in the hotel’s many spaces. These spaces include an impressive Wellness Centre, refurbished from a previous incarnation as a Tesco training building, a music room replete with karaoke machine, two bars, two restaurants, a bakery and an open-plan social space called The Hub, complete with off-shooting rooms for co-working.

There is a lot to take in at Birch. To begin with, the design is haphazard and overwhelming. Walk through the property and vast, newly painted ultramarine walls give way to exposed plasterwork before labyrinthine corridors lead to Matisse-style murals, beautiful original mosaic flooring, Ercol-style furniture and more exposed pipework and air ducts than you’d see at your nearest Costco. 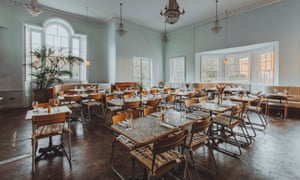 In the 140 rooms (doubles, twins and family rooms with additional bunks) there are no desks and no TVs, just inordinately comfortable beds, obscure sculptural hanging racks, bunches of dried flowers and – in my case – a dingy bathroom repainted bubblegum pink. There are well-thought-out moments, such as the individual ceramic keyrings that match the room numberings, or the handcrafted beer and wine taps, but overall it is like the most chaotic Pinterest board made real; a hasty DIY SOS makeover meets industrial-chic Hackney cafe.

And it is not just the design that perplexes. A core function of Birch is to offer a curated “cultural programme”. This means that during your stay you can take part in classes ranging from gong baths to sourdough and soda breadmaking, glassblowing workshops and outdoor yoga – offerings seemingly unimpeded by Covid restrictions (though there is hand sanitiser dotted about and A4 posters reminding people to keep distanced). These classes come at a cost, ranging from £20 for an hour of soda-bread kneading to £150 for a pair to go glassblowing, and there is so much on offer, each experience inevitably feels underwhelming. For instance, my gong bath was interrupted by the sounds of cars wheeling through crunching gravel outside, a snoring attendee and the unceremonious checking of payments at the beginning. After an hour, I left feeling as unrelaxed as ever. 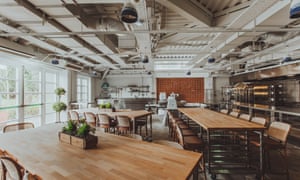 Birch sits among the trend hotels aiming to cater to young people more likely to choose an Airbnb for a hyperlocal, informal stay rather than the commercial rigidity of an establishment. It is a concept that has gained traction in recent years, prompting multinationals such as Hilton and Accor to launch new, less staid brands, as well as spawning new contenders in the likes of Curtain, a hotel and members’ club in Shoreditch, and apart-hotel groups like Locke Living, with their focus on co-working spaces, wellness programmes and “creative” events. Birch muddies this easygoing ethos by also being a members’ club. Anyone can become a member for £100 a month, as well as £150 joining fee, and that allows unfettered access to classes and discount room rates, which start at £120 per night for a double room.

Penn may want the Birch ethos to be one of accessibility and inclusivity, with guests feeling empowered to try new experiences at will, but money is of course everything. And everything at Birch falls into the “London prices” category: £4 for a small bottle of lemonade, £10 for a mini ingot of goat’s cheese and crackers, £10 for a sandwich. The water, though, is free.

There is one place where Birch makes sense. That is at chef Robin Gill’s Zebra Riding Club restaurant. In the manor’s old stables, an open-plan kitchen produces remarkably good food at £48 for its tasting menu. The ethos is farm-to-table and dishes include home-cured bresaola with pickled green tomato and perfect sourdough from the onsite bakery, firm yet flaky monkfish steaks, and a mouth-wateringly umami broth with eggs from rescued battery Birch hens. Perhaps this restaurant should be made more central to the Birch experience, rather than another adjunct to try out. 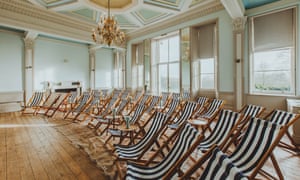 Birch is at pains to tell you it is not just a hotel – it is a wellness space, an oasis of respite from London located close enough to London and filled with enough people from London to make you feel like you’re still in London, while savouring the opportunity to tell your Instagram followers that you are, actually, not in London. It is chasing the lustre of a concept brand for cashed-up millennials, yet with this generation facing down a second “once in a lifetime” recession, their needs would be better served with a space that can offer affordable, quiet respite, rather than a brand pressuring its guests to constantly “do”.

If Birch put its keen hyperactivity to rest and focused on what it could do well – food and board – then it might reach that hallmark of holistic wellness: considered simplicity. Until then, it is merely another playground for the moderately wealthy, clothed in the marketing babble of individual absolution.

• Accommodation was provided by Birch, which has doubles from £120 room-only (breakfast from £5), birchcommunity.com

Airbnb Teamed Up With Bill Nye and Olivia Wilde to Create Online Field Trips for Kids
Recent Posts
This website uses cookies to improve your user experience and to provide you with advertisements that are relevant to your interests. By continuing to browse the site you are agreeing to our use of cookies.Ok