Our sandstorm hell: Passengers in Gran Canaria tweet plea to be flown back to the UK by Tui after being ‘abandoned’ for four days following Saharan storm flight cancellations

A holidaymaker says he has been ‘abandoned’ in Gran Canaria for four days by Tui after his flight back to the UK was cancelled due to sandstorms.

Greg Horsman, from Angelsey in Wales, had been due to fly to Manchester on Saturday evening after enjoying a Tui cruise with his girlfriend and friends.

After his flight was cancelled due to the Saharan storm, he was forced to spend two extra nights on the island and the 29-year-old says he was due to fly back to the UK yesterday. 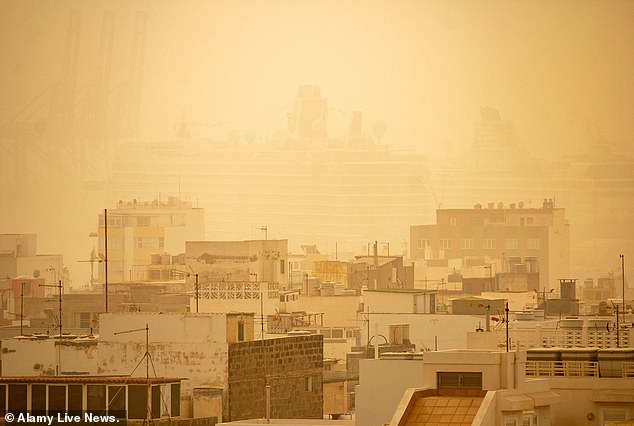 But his flight yesterday evening was also cancelled with Mr Horsman saying passengers were given different reasons why – from a technical issue to a weather issue.

He claims that passengers, including the elderly and young children, were forced to sleep in the airport as there was no accommodation available. He tweeted a series of pictures showing travellers lying on seats and sitting on the floor.

He wrote: ‘Flight isn’t going tonight as the pilot has gone over their hours, no accommodation so sleeping on the airport floor. Been here over 12 hours today and now finally been given one food voucher.’

Meanwhile, his girlfriend, Kathryn Foulkes, pleaded with Tui for help on Twitter saying: ‘Please come and get us from Gran Canaria.

‘We have been abandoned here since yesterday but been brought here every day for three days before that. This is our fourth day at the airport! We are sleeping on benches.’

Today, Mr Horsman says he was told that his flight to Manchester would be leaving at 2.30pm but that just 15 minutes before departure, he was told there weren’t enough Tui staff to board the flight.

He also claims that other passengers were told the flight was being delayed due to a technical problem.

His girlfriend also tweeted: ‘@TUIUK Been delayed four days. Rescue flight TOM934 due to depart at 14.30, it is 14.33, nobody has boarded, no staff at gate, no explanations.’