Howdy Canada! Saddle up for the ride of your life at the Calgary Stampede

After witnessing several riders risk life and limb on bucking broncos, I ask our local guide at the Calgary Stampede: ‘Do you need a screw loose to do rodeo?’

‘No,’ she says. ‘You have to have a whole toolbox missing.’

But that’s exactly what makes the Stampede so thrilling, an event overflowing with adrenaline and one that lives up to its billing as ‘The Greatest Outdoor Show on Earth’. 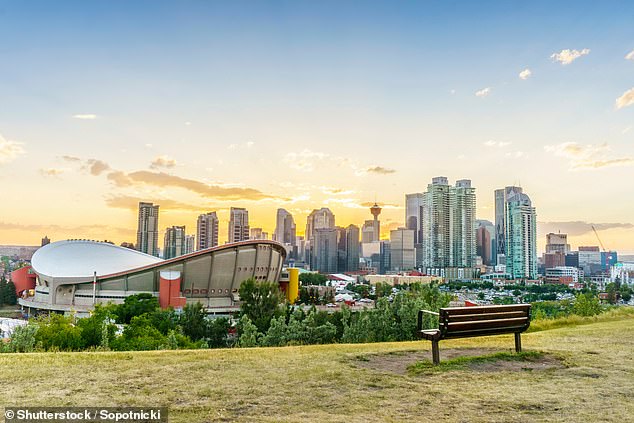 Held in Alberta, Canada, the Stampede runs for ten days and is attended by 1.3 million people

The bad news is, this year’s event has been cancelled; the good news is there’s plenty of time to plan a trip for July 2021. And you should.

After all, now in its 108th year, the Stampede includes the largest, most prestigious rodeo in the world.

Held in Alberta, Canada, the event runs for ten days with the help of 2,300 volunteers and is attended by 1.3 million people. The crowds come to witness the 120 top daredevil cowboys on the planet compete in the rodeo equivalent of the World Cup for total prize money of Canadian $1.5 million (£880,000).

And the dress code is stricter than at than Royal Ascot — cowboys must never tuck their jeans into their boots.

Arriving at the 220-acre Stampede Park, we are handed John Wayne-style ten-gallon hats and flamboyant turquoise shirts, which immediately get us in the mood. Soon we are involuntarily yelping: ‘Yee-haw!’

There is masses to do at the Stampede, a not-for-profit community event which ploughs its money back in for the following year. You can attend a canine display in the felicitously named Dog Bowl, or visit a First Nations camp, where you can meet people from the Blackfoot Tribe, go into a tepee and watch a pow wow.

Or you can simply spend the day touring the 200 food stands. Along the way, hoover up such culinary delights as KitKat fries, bug pizza, Octo-Lolly (three octopuses on a stick, since you ask) and the Monster Bug Bowl, which contains two scoops of ice cream and (real) crickets, silkworms and June bugs. It’s the Stampede version of a Bushtucker Trial.

The most death-defying activity is the rodeo. At the stables beforehand, we chat to Lane Tournier, a professional chuckwagon racer. 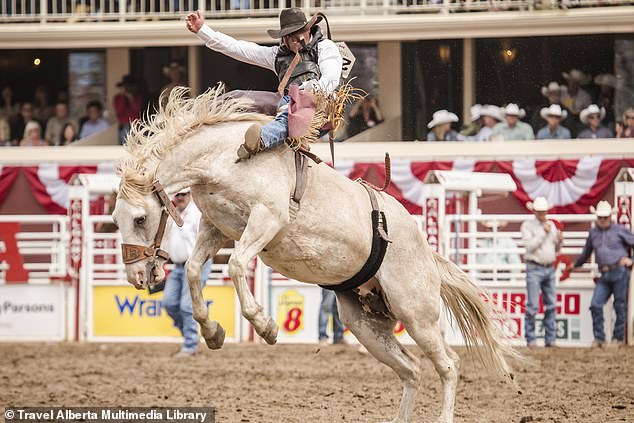 Thrilling: Top daredevil cowboys on the planet compete in the rodeo equivalent of the World Cup

‘I fell off a chuckwagon once,’ he says. ‘It was raining and I had slippery pants on. I dislocated my shoulder, but it was just a flesh wound. I drove the next day.’

We are only a couple of metres away from the cowboys as they saddle up and climb on to their mounts. In the seconds before their rides begin, several of them mutter prayers under their breath. I don’t blame them.

The cowboy nods and the gate is pulled open. All hell breaks loose. I can feel the sheer power unleashed by the animal as it bursts out of the pen and flexes its back in a frenzied attempt to unseat the rider. It is like a creature possessed.

What happens next is brutally unforgiving. The aim is for the cowboy to stay on top of his bucking bronco or bull for all of eight seconds. Even the riders who somehow succeed are thrown around like rag dolls.

One, called Ryan Dirteater (surely the perfect rodeo name and apparently not a pseudonym), gets flung off in four seconds flat by a particularly lively bull with the name Nervous Twitch. Several injured riders are carried out of the ring, as if they were gladiators being borne out of the Roman arena on their shields.

Then it’s on to the chuckwagon races, which feature drivers with such splendid names as Dallas Dyck, Darcy Flad, Chance Bensmiller and — I kid you not — Roger Moore. We can hear the hooves clattering and the harnesses clunking as the wagons fly past. It’s like a chariot race, only more insane. Ben-Hur, eat your heart out. I ask the barman serving me a post-Stampede beer if he has ever considered taking up rodeo. ‘No. I love riding, but I value my life.’

I leave for the airport singing to myself: ‘Like a rhinestone cowboy, riding out on a horse in a star-spangled rodeo . . .’

The Calgary Stampede 2021 runs from July 9 to 18. More information at calgarystampede.com.

Emirates unveils plan for kosher meals following UAE-Israel accord
Recent Posts
This website uses cookies to improve your user experience and to provide you with advertisements that are relevant to your interests. By continuing to browse the site you are agreeing to our use of cookies.Ok