The greatest show OVER Earth! The 25 most magical aurora images of 2020, from an incredible Antarctica display to a jaw-dropping spectacle captured above Michigan

Here we present 25 of the best aurora pictures taken around in the world in 2020 – and they are sure to make your eyes light up.

They are part of the Northern Lights Photographer of the Year collection, which is curated each year by travel and photography blog Capture the Atlas.

The incredible images were snapped by photographers in countries such as Norway, Iceland, Russia and the United States, where auroras are known as the Northern Lights or aurora borealis. The portfolio also contains stunning shots taken in Australia and Antarctica, where the phenomenon is called the Southern Lights or aurora australis.

Capture the Atlas said: ‘The quality of the image, the story behind the shot, and the overall inspiration that the photograph can provide are the main factors for selecting the images every year. The collection not only helps other photographers who want to photograph the Northern Lights but also brings our universe closer so everyone can learn and discover more about this natural show.’

Scroll down and prepare to be dazzled. 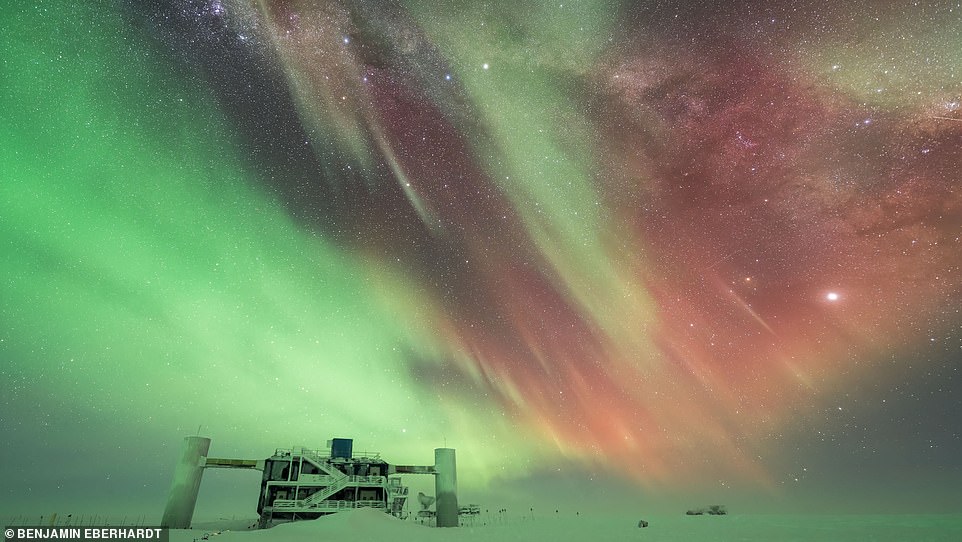 This incredible image by Benjamin Eberhardt, and edited by Martin Heck, shows a ‘strong and colourful aurora’ above the Ice Cube Neutrino Observatory in Antarctica. The photo is part of a longer 24-hour timelapse series. Benjamin said: ‘The South Pole is probably one of the most remote and challenging environments to do photography, and it is strenuous for both humans and technology’ 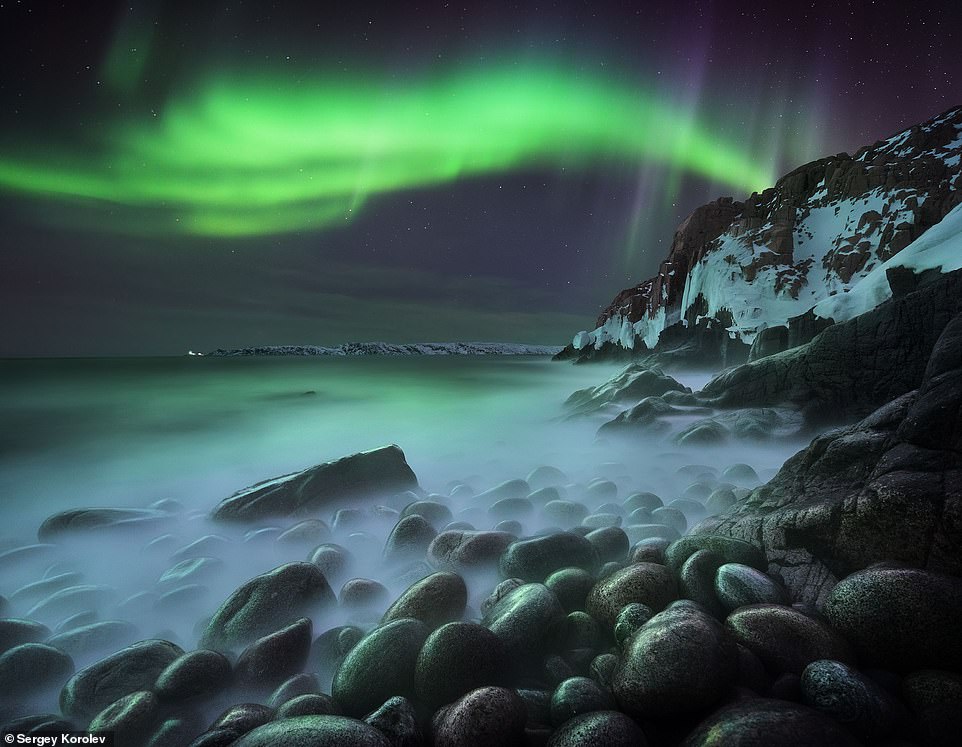 An aurora dazzles above a stone beach on Russia’s Kola Peninsula in an eye-popping shot by Sergey Korolev. He said: ‘I found this stone beach on the Barents Sea coast a few years ago. At the time, I was mesmerised by the shape of the boulders, which moved with the rumble of the ocean waves, as well as the steep mountains rising from the sea. I tried to shoot the aurora here for a long time, and one day, I got lucky and captured this image’ 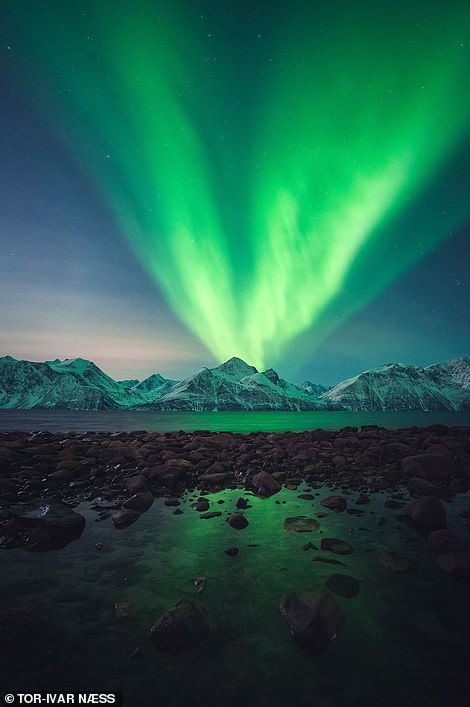 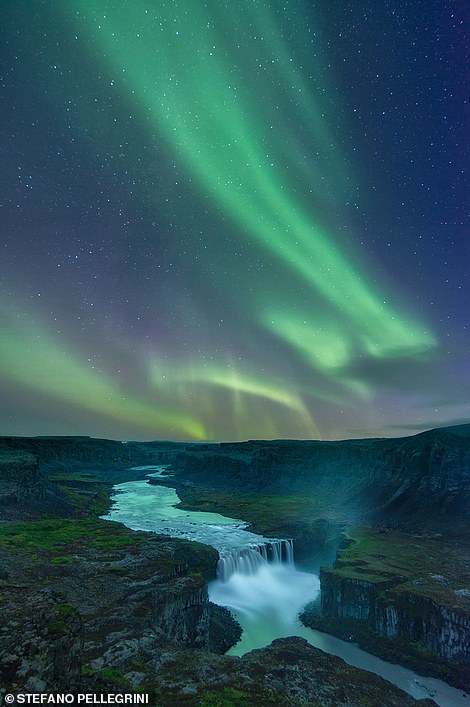 On the left is an incredible image snapped by Tor-Ivar Naess in Norway’s Lyngen Alps of a Northern Lights display appearing to erupt out of a mountain . This majestic mountain range is, he said, ‘always a fantastic background when the Northern Lights go bananas’. He added: ‘It was a clear night in February, and the Northern Lights started moving very slowly, but they kept building up, so when I watched what was happening on my LCD screen, the Northern Lights looked as if they were erupting from the mountain.’ On the right is a breathtaking image by photographer Stefano Pellegrini of a light show above Iceland’s Hafragilsfoss waterfall. He said: ‘It was absolutely breathtaking and one of the most incredible shows I’ve ever seen!’ 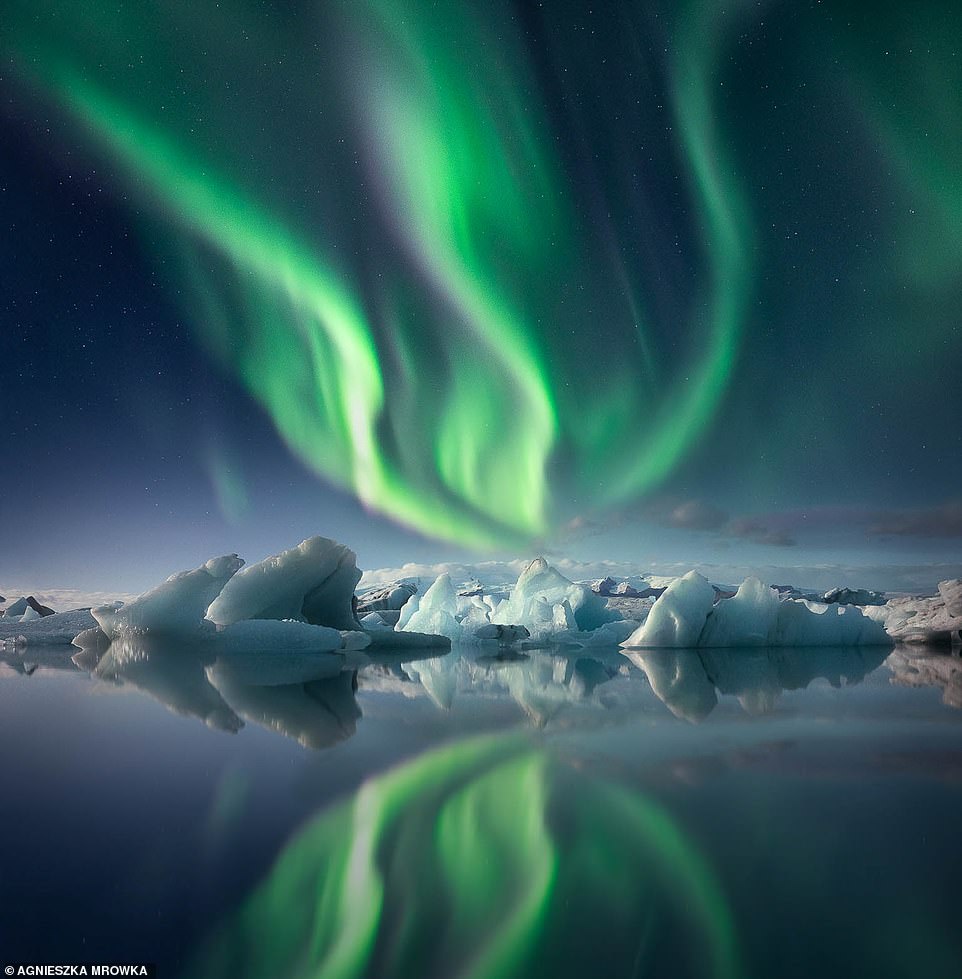 Vibrant Northern Lights are reflected in a glacier lagoon in Jokulsarlon, Iceland, in a beautiful image taken by Agnieszka Mrowka. She said: ‘It was late September 2020 and finally the perfect conditions for the Northern Lights came together. It was a fierce and peaceful night to remember’ 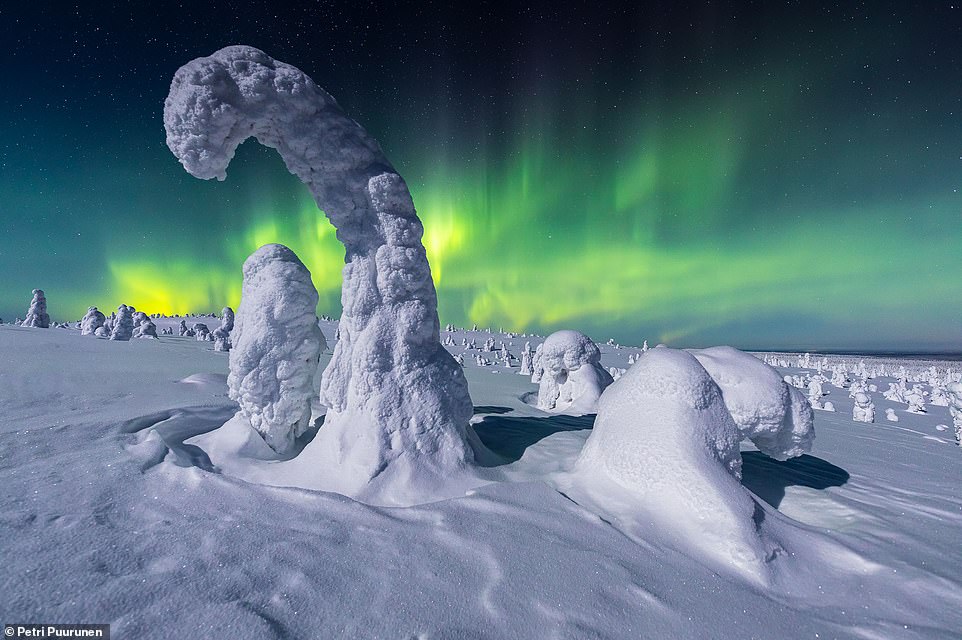 A jaw-dropping image of the Northern Lights dancing above snow-covered spruce trees in Finnish Lapland. The photographer behind the image is Petri Puurunen, who said: ‘The half-moon was illuminating the scenery, so the conditions were nearly perfect. While wandering around the area and searching for compositions, the aurora was slowly climbing up to the sky, fading away just 10 minutes later. I managed to get a couple of decent photos’

A beautiful scene in Norway’s Lofoten Islands captured by José Antonio Mateos Fajardo. He said: ‘At first, the aurora seemed like a faint cloud changing its colours from yellow to lime. After some test shots, the faint cloud had turned into a big aurora and the landscape was magical, with the moon illuminating the mountains’ 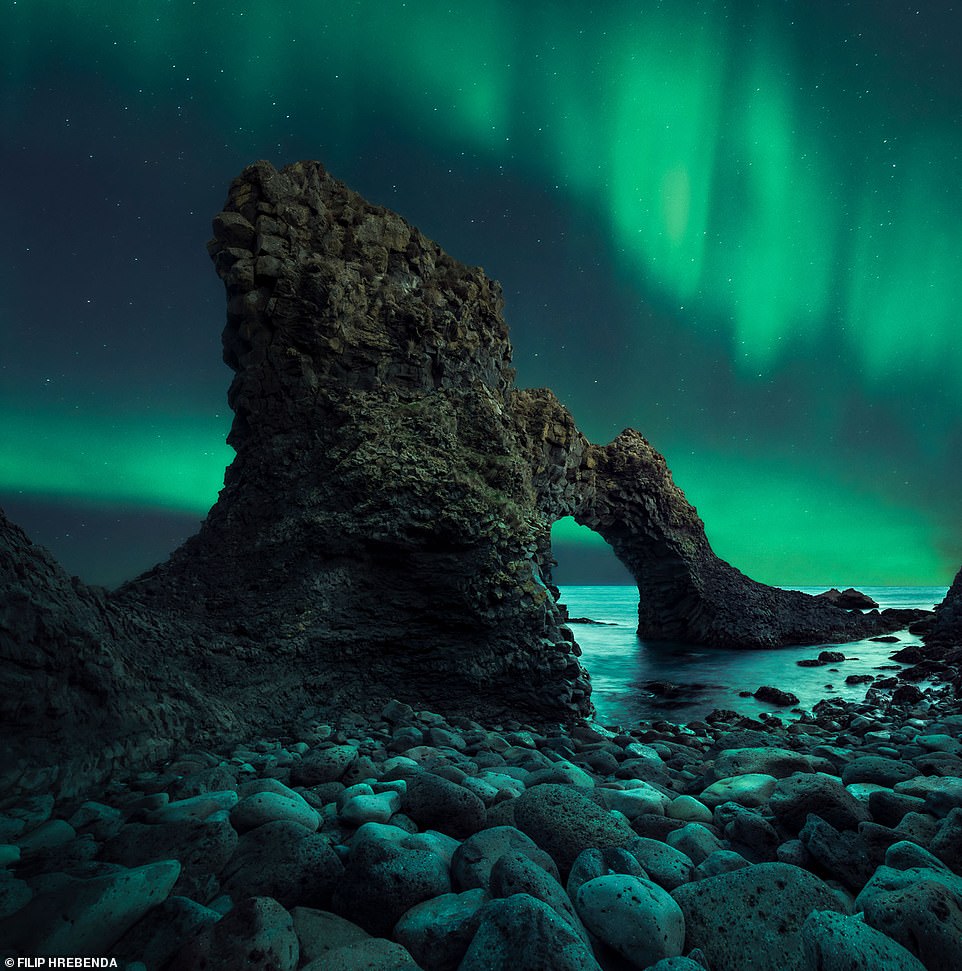 This colourful display was snapped in Iceland by Filip Hrebenda. He explained: ‘I was really tired after a long day of travelling across Iceland and shooting the sunset in the northern part of the country. Despite the challenges, I managed to pull off a very special aurora image. It doesn’t matter how tired you are, when the aurora shows up, euphoria always wins over fatigue!’ 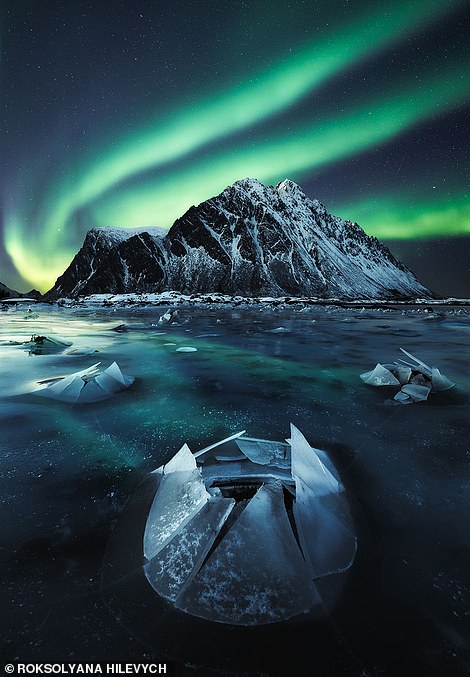 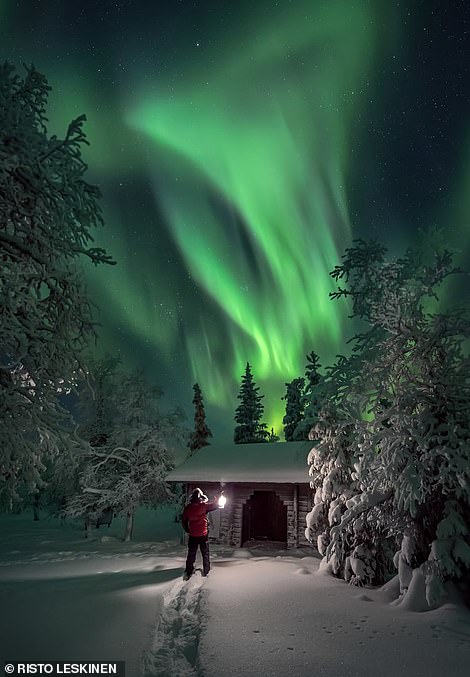 On the left is an incredible image of an aurora above Norway’s Lofoten Islands by Roksolyana Hilevych when temperatures were reaching a chilly -20C. She said: ‘It was probably one of the best shows of watching and photographing the Northern Lights I’ve ever experienced.’ On the right, an aurora appears almost like flames in the sky in a striking shot by Risto Leskinen. He captured the incredible scene in Pallas-Yllas National Park in Finnish Lapland. He noted: ‘It was freezing cold, but flames like these make you forget the temperature’ 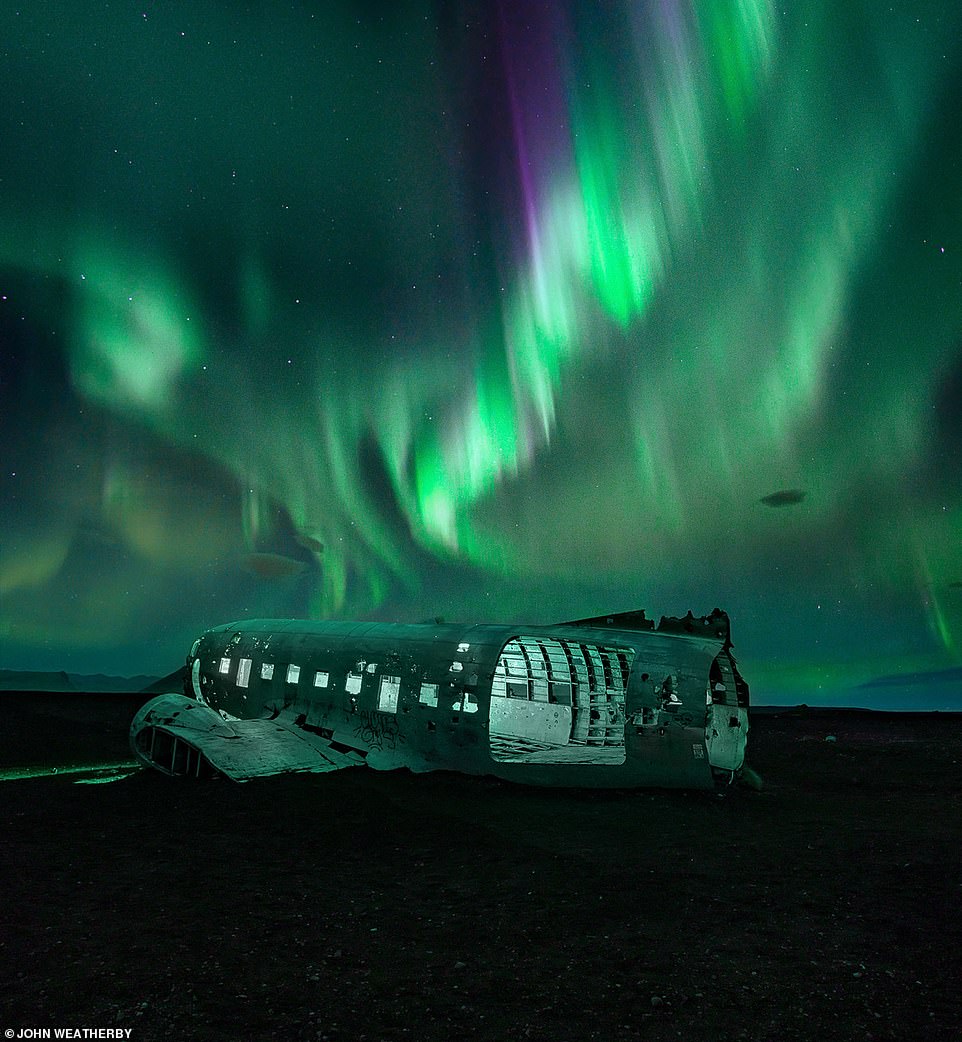 A dazzling green sky above the wreckage of a crashed plane in Solheimasandur, Iceland, captured by John Weatherby. He said: ‘I love chasing the Northern Lights because it is always a new experience. No two auroras are the same. The thrill is the chase. The forecast could call for nothing, but then, out of nowhere, it’s amazing’ 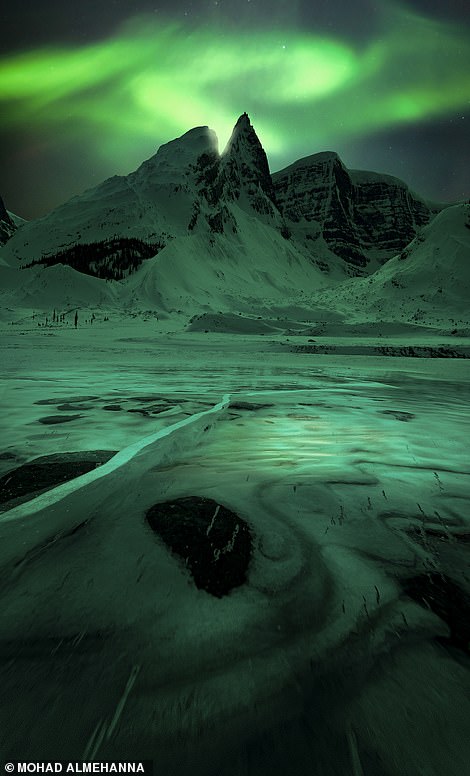 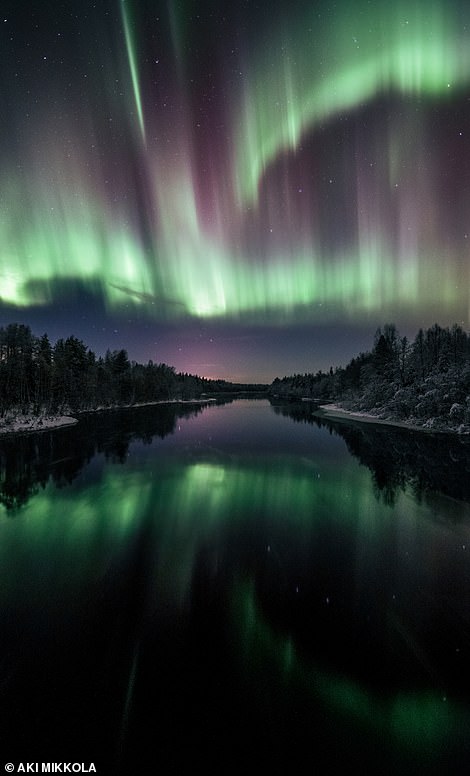 On the left is a beautiful shot by Mohad Almehanna, taken in Yukon, northwest Canada. He said: ‘The overwhelming feeling of seeing the spectacular phenomenon for the first time and racing against time and cold to get the photo was such a thrill that I want to experience it again.’ On the right is a stunning aurora caught on camera by Aki Mikkola in Finnish Lapland. He said: ‘It was early winter, the water was still, and there was a reflection and reddish Aurora – not a very common combination!’ 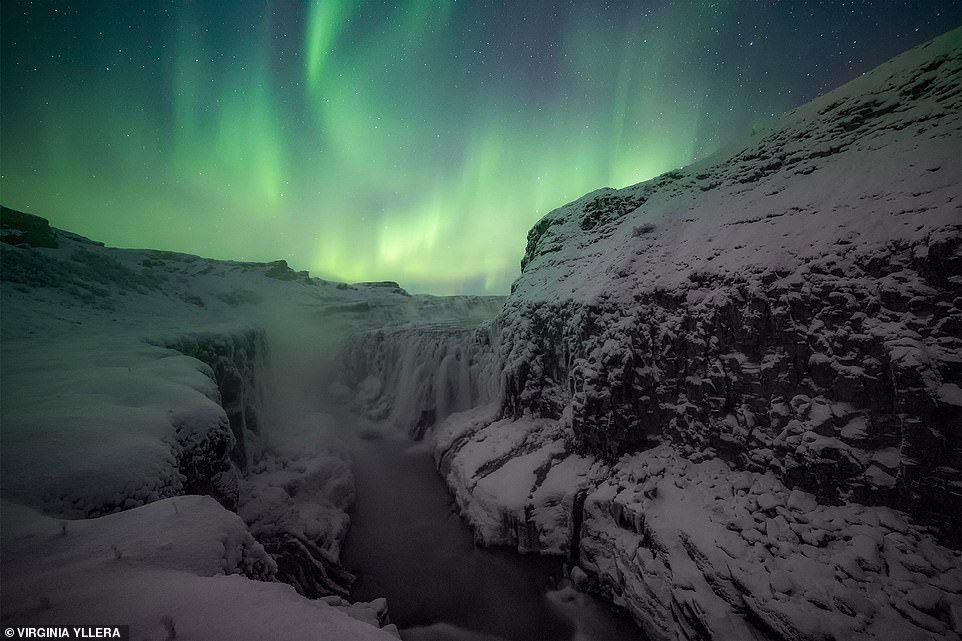 The Northern Lights dazzle the Icelandic landscape in a mystical shot by Virginia Yllera, who snapped the image on a cold and windy night. She explained: ‘The shooting conditions were challenging, as I constantly had to wipe out the lens and make sure that the composition and exposure were correct. Finally, the lights exploded and all the effort paid off’ 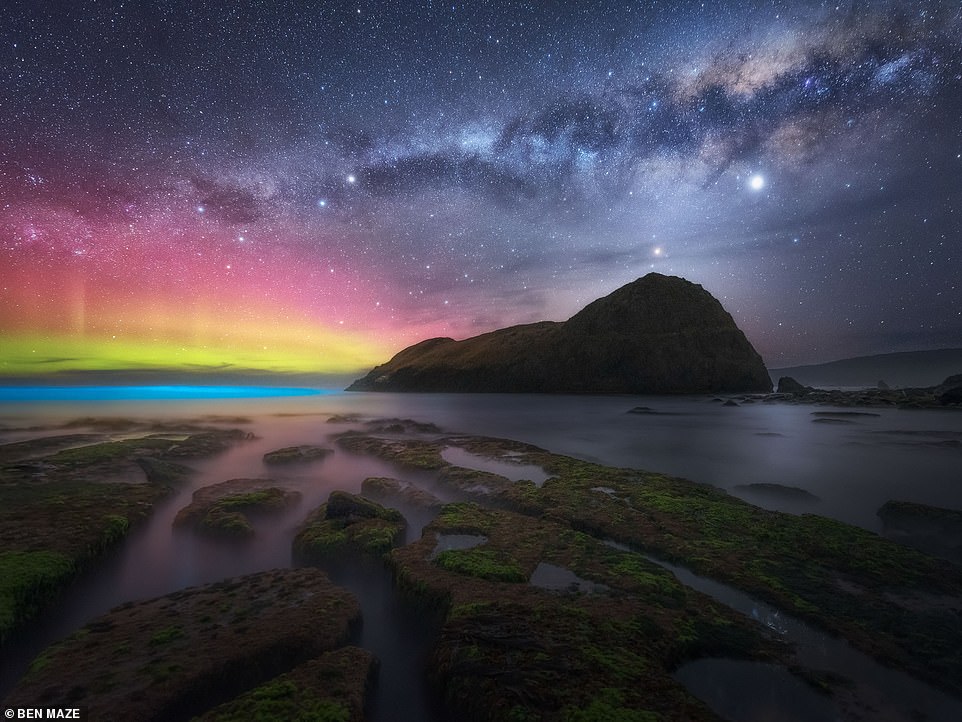 In this sublime image taken in Tasmania, Ben Maze managed to snap a breathtaking aurora – and two other phenomena. He explained: ‘Captured in this image is a trifecta of astronomical phenomena that made for some of the best astro-photography conditions one can witness in Australia, namely, the setting Milky Way galactic core, zodiacal light, and of course, the elusive aurora australis. On top of this, a sparkling display of oceanic bioluminescence adorned the crashing waves, adding the cherry on top of what was already a breathtaking experience’ 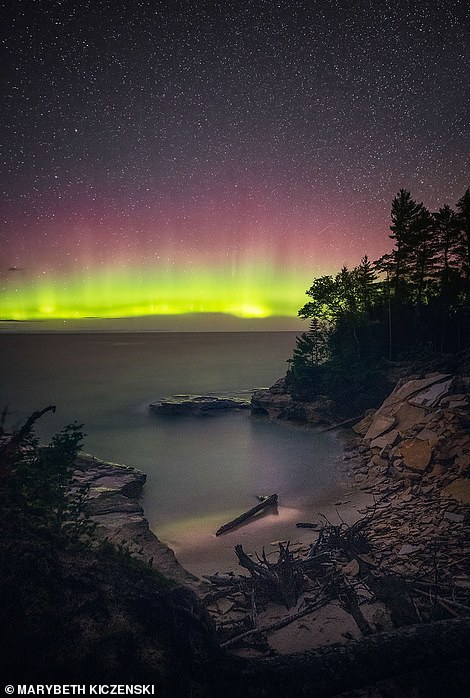 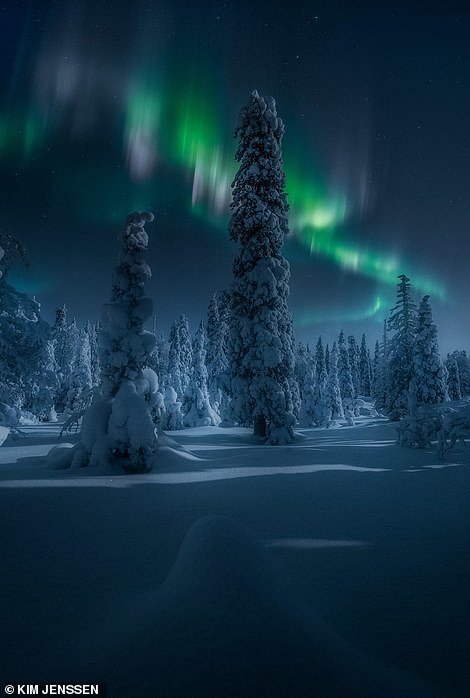 On the left is a jaw-dropping image of the Northern Lights lighting above Michigan’s Upper Peninsula. It was taken by MaryBeth Kiczenski, who explained: ‘Unpredictable. Wild. Mesmerising. The aurora speaks to a certain area of your soul: the part that transcends everyday life, and enters into the almost supernatural. This is the draw to chasing the aurora. It’s a feeling I have trouble putting into words.’ On the right is a beautiful photo by Kim Jenssen taken in Finnish Lapland. He said: ‘After spending many hours waiting in the cold forest of Ruka, Finland, in – 36C, and without any visible aurora activity, we decided to walk back to our cars. On the trail down, I saw something on my left side and told my friend to stop and wait. Suddenly, the aurora started to dance and all I had to do was to jump in the snow, get my camera ready, and shoot!’ 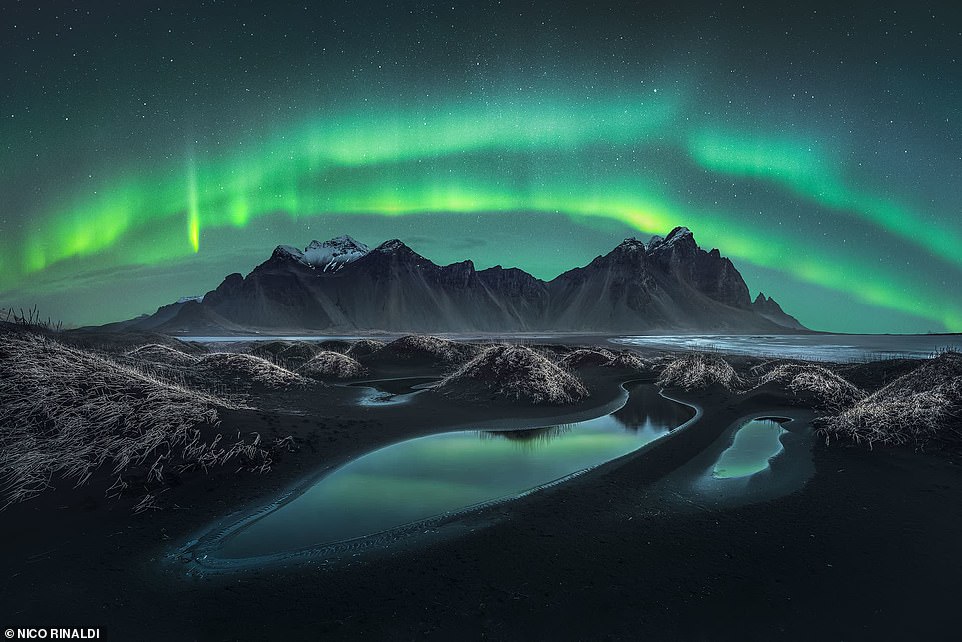 A volcanic black sand beach surrounded by large dunes in Iceland shines under the Northern Lights. The glorious shot was snapped by Nico Rinaldi, who said: ‘After spending several hours observing the sky, around 1am the clouds moved away, and the sky was already covered by the Northern Lights. Full of euphoria, I went to the spot I liked and took a series of photographs of this unique natural show!’ 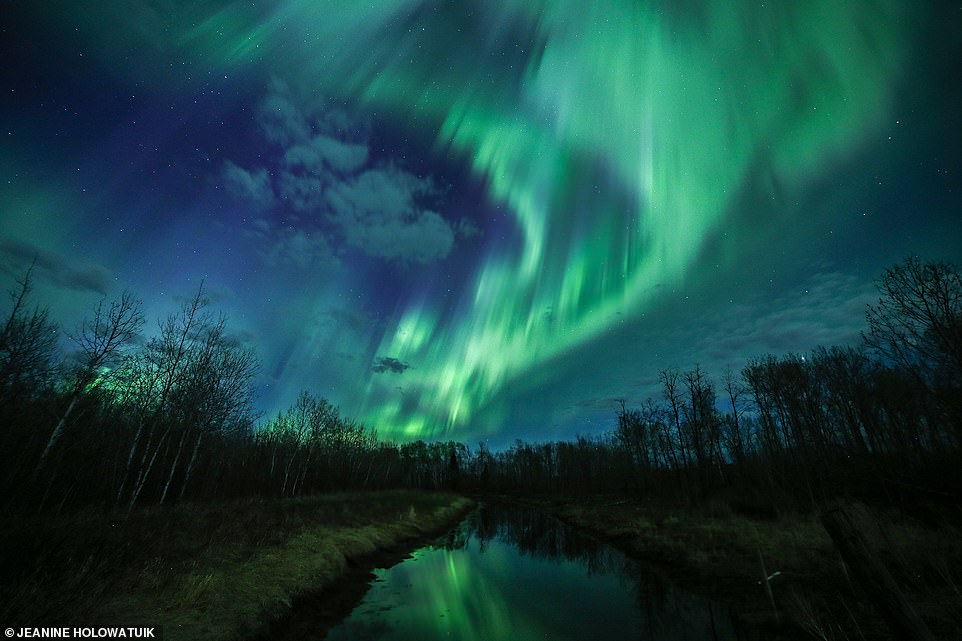 A magical scene in a forest in Saskatchewan, Canada, captured by Jeanine Holowatuik, who said the aurora ‘came out of nowhere’. She added: ‘The show was strong, and the lights were visible in every direction at its peak, which doesn’t happen often at my latitude. It was a warm spring evening and I captured the lights dancing right until the morning light, a night I’ll never forget!’ 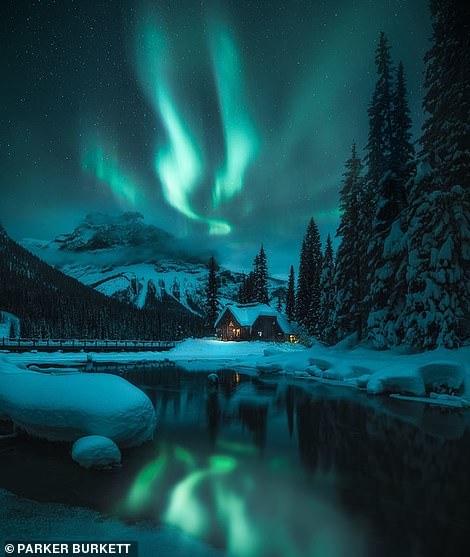 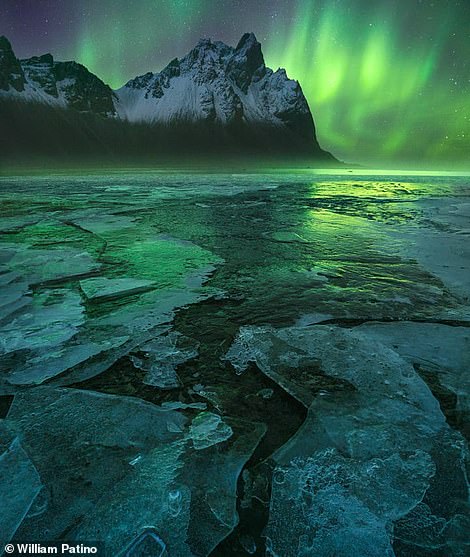 On the left, a lake in Canada’s British Columbia is aglow in a shot taken by Parker Burkett. He said: ‘Racing to find a good location as the lights came out, we just barely caught the tail end of the show. A quick sprint to the lake edge, and the magic happened. Experiences like these remind me that sometimes I need to stop and enjoy what’s in front of me.’ On the right is a shot by William Patino of the Northern Lights and a meteor shower over the Vestrahorn mountain on Iceland’s Stokssnes headland. William said: ‘It’s rare for everything to align when capturing the Northern Lights, especially in Iceland, but on this occasion, everything came together, including a meteor shower and the icy foreground, which is rare for this location’ 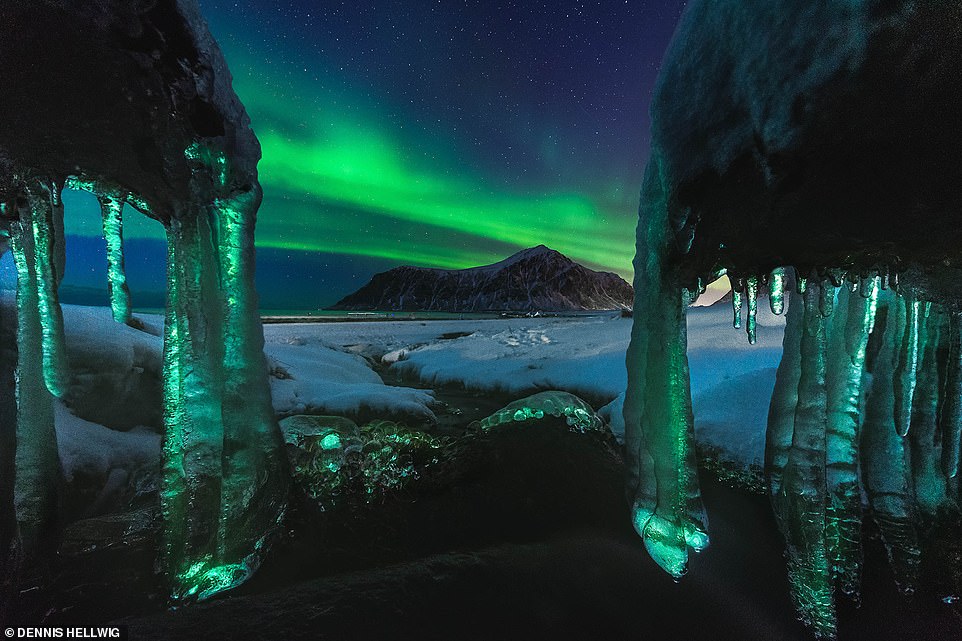 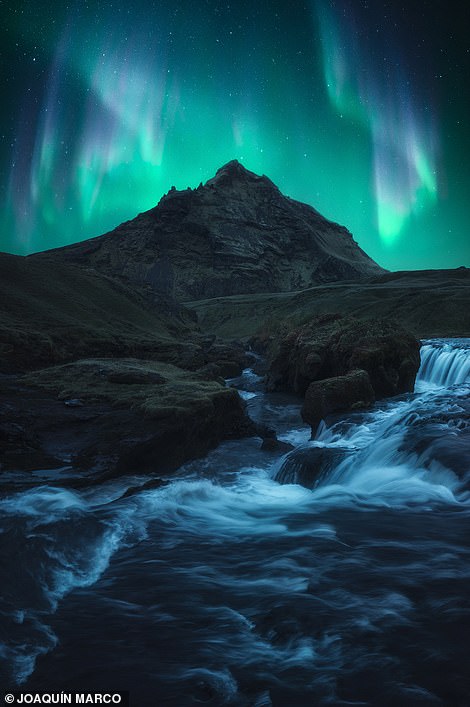 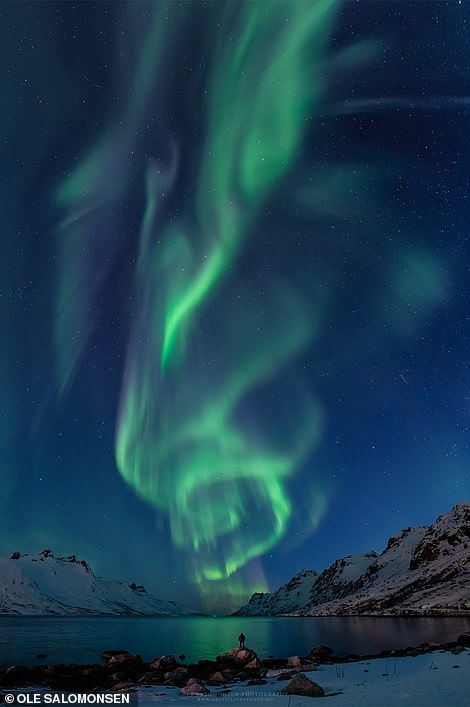 On the left is a mesmerising image taken on a ‘magical night’ by Joaquín Marco from the top of Iceland’s Skogafoss waterfall. On the right is a magnificent display snapped by Ole Salomonsen close to the city of Tromso in Norway. Ole has been chasing the Northern Lights for more than 10 years and said: ‘I shot many different images, but this one stretching all over the sky with me standing on the rock in the foreground shows very well how amazing and large the auroras can be’ 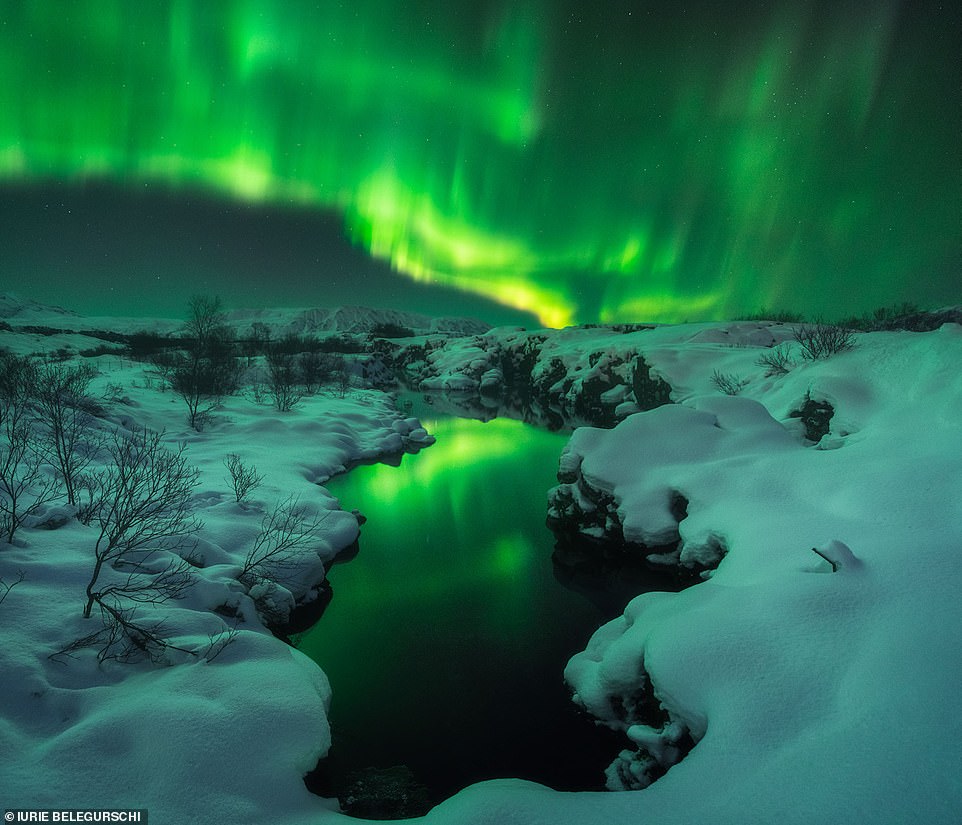 Iurie Belegurschi snapped this vibrant aurora image in Thingvellir National Park, Iceland, while his car was stuck in the snow. He said: ‘My car got stuck in the snow and when I was waiting for help, the Northern Lights finally showed up and danced for about 10 minutes. I was lucky to get stuck next to this pond and take this shot with the aurora reflected on the water’