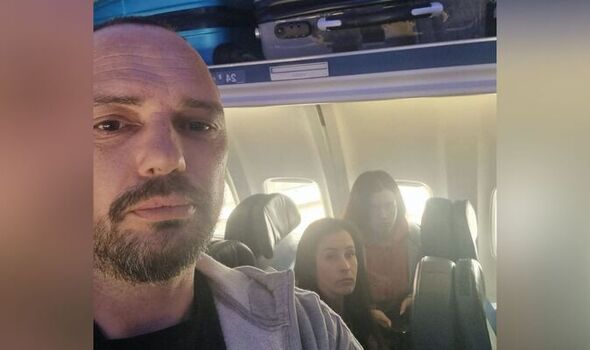 Ian McStein was looking forward to spending a fortnight on the Greek island with his family, but was instead caught up in the chaos engulfing Manchester Airport. The family, who had travelled from Runcorn, Cheshire, were met with long queues.

Ian, 43, was then informed their flight was cancelled and that they should go home and return the next day, reports The Liverpool Echo.

The following day their flight was again cancelled as the plane did not have any bottled water onboard.

When the family boarded another plane later that evening there was an almost four-hour wait on the runway before police boarded the jet.

The officers informed them that the plane could not leave.

Finally, the next plane they were told to board “didn’t have enough seats” leading to the family scrapping the whole holiday.

The dad-of-four said: “We got there four hours early as we’d heard about the queues. The first plane we couldn’t fly on, don’t know why.

“The second plane we couldn’t fly on, it didn’t have bottled water. And then the next, we sat on the runway for three-and-a-half hours.

“The pilot didn’t have enough air time, enough flying hours. This was 2am or 3am in the morning. We were waiting to get through security, it took two hours.

“In the end the police had to come, not to calm us down, no-one was kicking off, it was broken (to us) by the police – there were no TUI reps whatsoever apart from the police – they told us our flight time was the next day at 12.45pm.

“We got there at 9am. TUI passengers had a special gate to go and check in.

“We were all pretty happy to be fair that we had a special gate, we all got through check-in and security pretty fast, went down to the gate.

“Most of the passengers went down to the gate, we were all made up. We were flying on a TUI Dreamliner.

“It was 45 minutes before boarding, 16 passengers got a text message to say ‘we are really sorry for the disruption to your journey, the aircraft is smaller than originally scheduled, which resulted in us having to remove some of our customers from today’s flight. We are sorry to confirm you are one of these’.”

With no reps available, Ian asked to speak to a manager who insisted the plane was too small but “went red in the face” when Ian said how many spare seats the flight had.

He added: “He went red in the face and said ‘there’s been a mess up here’. We got cancelled because there ‘wasn’t enough room’ on that plane. There were 30 (empty) seats.”

A spokeswoman for TUI said: “We would like to apologise to Mr McStein and his family.

“The aircraft originally scheduled for flight TOM2744 from Manchester to Heraklion on Sunday, May 29 was changed at the last minute due to operational issues, impacting a small number of customers.

“We contacted everyone as soon as we became aware of the change, offering the option to cancel their holiday for a full refund.

“We understand how frustrating and disappointment this will have been and are very sorry for the inconvenience caused.”