Why being single can be DOUBLE the fun: Solo holidays too often used to be dismal rip-offs. But as travel writer Liz Hoggard discovered, they’re suddenly a gloriously sociable – and affordable – way to travel

Half-naked on a marble slab in a Turkish bath and I’m being hosed down by a handsome masseur.

I look over to my two female companions for reassurance.

‘Are you three sisters?’ the masseur asks. Actually no (though we may look alike with our brown hair and Zara towels). ‘We’re sisters from a different mister,’ I joke. 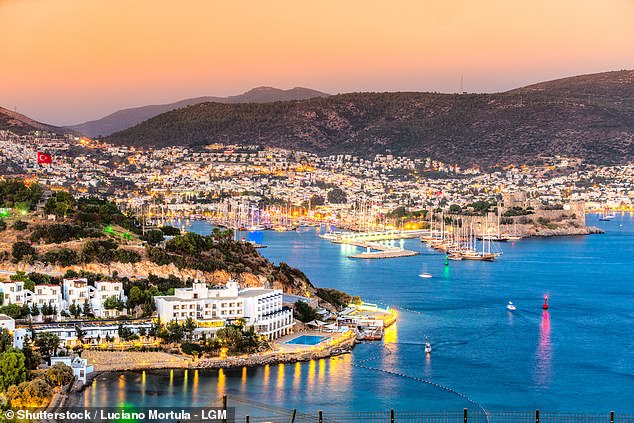 Until she arrived in Bodrum, on Turkey’s Aegean coast, pictured, Liz Hoggard had never been on a singles holiday

Liz, pictured, said the idea of a group holiday with strangers made her nervous. But she soon found she needn’t have worried

And it’s true — I really do feel like I’ve met my holiday tribe. We’ve chatted and laughed and shared stories all week.

Until I arrived in Bodrum, on Turkey’s Aegean coast, I’d never been on a singles holiday, though I’m a big believer in solo adventures.

But the idea of a group holiday with strangers made me nervous. I had visions of an ageing Club 18-30. I needn’t have worried. Friendship Travel (FT) is the opposite of a dating agency.

Founded in 1999 by Colum McLornan to give sociable types a chance to meet, the company arranges small group trips to resorts around the Med, the Canaries, North Africa and the Caribbean.

You’re all booked into the same hotel, but then you spend as little or as much time together as you like.

In the evenings, a friendly FT concierge (part-tour guide, part-fixer) hosts ‘ice breaker’ drinks and a group supper, either at the hotel or a local restaurant.

It’s a brilliant idea. Most solo travellers are fairly independent, but the evenings are the killer. My default position is to find an anonymous bistro with a novel, and be in bed by 10pm. But I know I should be braver.

FT holidays are priced on the basis of having a standard double room to yourself, with no single supplement. I’m staying at the family-run 4reasons, a gorgeous 20-room boutique hotel set around a pool in Yalikavak on the Bodrum peninsula. And frankly, I could live here for ever.

Each day, after group yoga in the garden, we gather for a leisurely breakfast before walking down to the beachfront harbour and marina, with its galleries and restaurants, or visiting Yalikavak’s food and textiles market. Back at the hotel bar, the group reunites for mezze lunch. 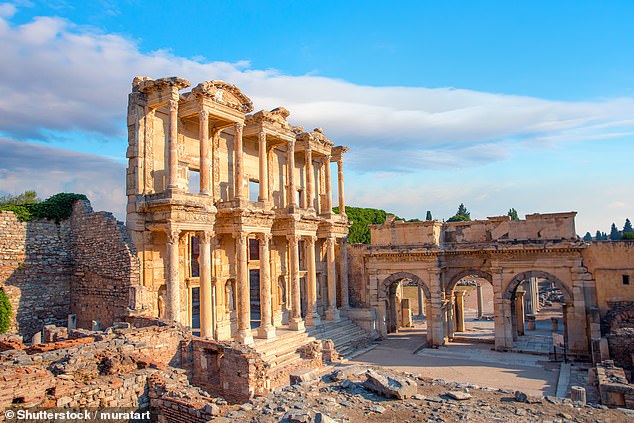 On Liz’s holiday to Bodrum, there was an excursion to the Roman city of Ephesus, pictured

There are excursions to Bodrum (dubbed ‘the new St Tropez’, with its historic fortress and designer shops) or the Roman city, Ephesus, plus horse-riding, boat trips and hikes. Three of us brave a scrub-down in the local Turkish baths — and emerge reborn, with the softest skin.

Romance is probably not on the cards. FT aims to balance the sexes for a ‘group dynamic’, but before I flew out, I was warned the trip would be three men to ten women. It seems midlife women will pay a little more for a boutique experience.

Our mixed group feels incredibly easy and relaxed. I stop panicking about wearing a bikini at 50-plus, or whether anyone would save me a seat at supper.

It’s never easy at the start of a group trip, of course. When our host, Chris, picks us up from Bodrum airport, it feels like the first day at school.

Grumpy and shattered after a 7am flight, I’m nervous. Several people already know each other from previous holidays. 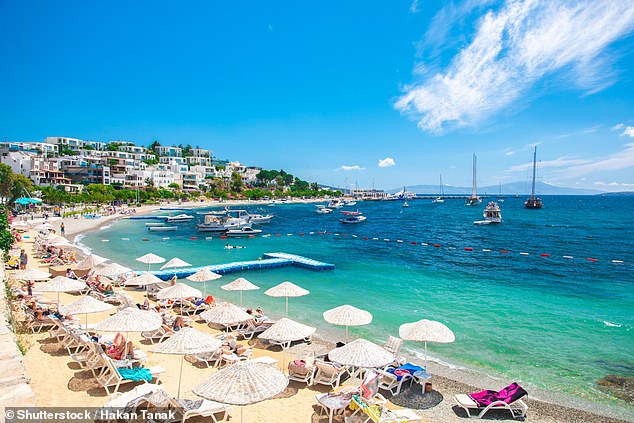 Liz says that everyday on the trip, the group gathered for a walk to Bodrum’s beachfront harbour, pictured

Seven nights at the 4reasons hotel including flights, daily breakfast, five dinners and support of a Friendship Travel Host throughout, from £965 (friendshiptravel.com).

After unpacking in my whitewashed room with a private terrace, I slink down to the hotel pool with a book, casting envious glances at the group having lunch.

Immediately a lovely woman comes over to my lounger and invites me to join them. ‘It can feel slightly awkward at first, she explains. ‘But everyone is so friendly.’

It’s not often you get to bond so fast. Aged 45-70, we’re all from different backgrounds. There’s a chic French lady from the British Council. Amanda, 45, who rescued me at the pool, is recently divorced.

Andrea, 70, has a partner at home but loves coming on group holidays with her best friend to meet new people. One man works as a live-in carer. Another is here as respite after a family bereavement. I’m touched by their stories.

I’d booked a seven-day stay (it sounded quite long enough for a holiday with strangers), but by the end I’m envious of the veterans staying two weeks.

Back home in the UK, I keep in touch with my ‘Sisters from a Different Mister’. In October, we went to an FT dinner dance in a country-house hotel. And now we can travel abroad again, I’m poring over the new brochure.

It’s been a tough year for singles in lockdown. Everyone deserves to be part of a new holiday tribe.

And here are another six swish solo breaks

From Jordan to Cuba, here is our pick of the best holidays for single travellers…

A TASTE OF SPAIN 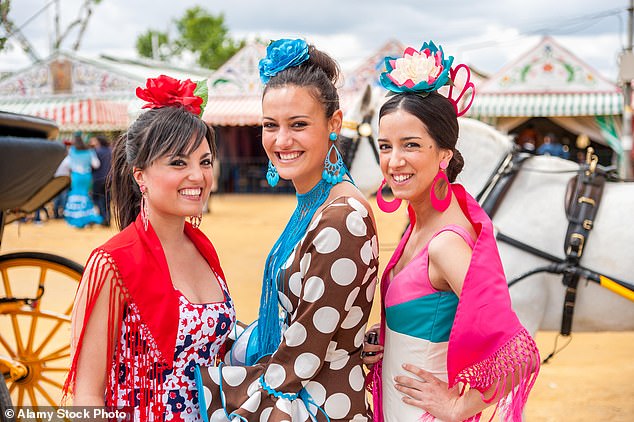 On a singles holiday to Spain, travellers can visit the cities of Seville and Jerez

Singles specialist One Traveller takes a gang of like-minded holidaymakers to the historic cities and beaches of the Costa de la Luz (Coast of Light).

You’ll stay on the outskirts of Rota, an ancient town north of the Bay of Cadiz, with trips to Seville and Jerez, home to sherry making.

Details: Eight days from £1,690 departing October 5 including flights, seven nights in a four-star hotel, plus a flamenco lesson and show with dinner (onetraveller.co.uk).

GO WILD FOR THE ISLES OF SCILLY

The Isles of Scilly is an archipelago of about 150 islands, with an abundance of flora and fauna including 453 species of seabirds, waders and migrants.

Why not stay on St Mary’s, and then visit the islands of Tresco, Bryher and St Martin’s, and take a boat trip to the uninhabited Eastern Isles for sightings of Atlantic grey seals. 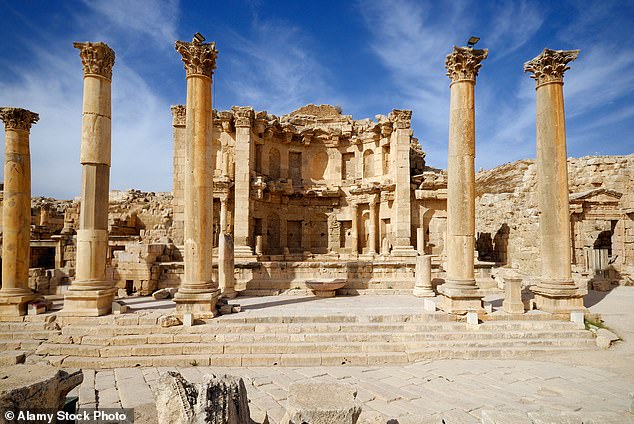 Historic: The ancient ruins of Jerash, which can be explored on a singles holiday to Jordan

Explore the Greco-Roman city of Jerash with Abercrombie & Kent’s Jordan: Petra & Beyond escorted tour. See Petra’s rosy temples and tombs, drive through the Wadi Rum desert in a 4×4 and float in the Dead Sea’s salty waters.

Details: Eight nights from £2,450 departing September 20 including accommodation, an airport meet and transfers; no single supplement if booked early (abercrombiekent.co.uk).

BEAUTY IN THE BALKANS

Join a sociable group of solo travellers to Montenegro, a Balkan delight with the most charming villages, a mild Mediterranean climate and sights from centuries ago.

Enjoy sweeping views from the top of Lovcen Mountain and visit Kotor Old Town, a Unesco-protected heritage site since 1979. 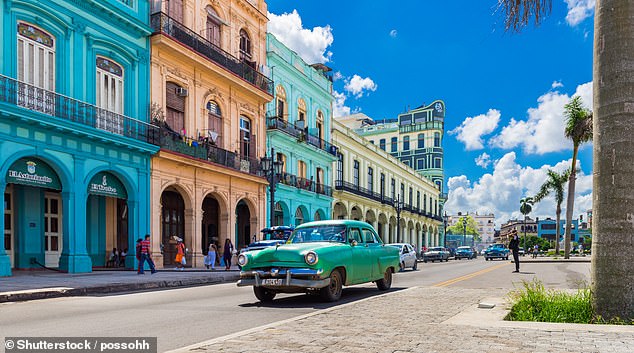 On a group trip to Cuba, single holidaymakers can discover the country’s rich colonial history

Spend three nights in the UNESCO World Heritage site Havana, with its baroque cathedral, many forts and Old Town.

You can then move on to port city Cienfuegos with its pastel-coloured buildings and San Juan de los Remedios, the oldest city in Cuba.

Details: Fifteen nights from £2,345 in November including flights, transfers and accommodation (vjv.com).

Enjoy a break at a five-star hotel by a sandy beach with magnificent archaeological sites to explore nearby at Kamiros and Lalyops to explore, plus the Acropolis at Lindos and the ruins of Rodos. Go for two weeks to make the most of it, in style.

Details: Fourteen nights at the Lindos Memories Hotel from £2,041 half-board on October 7 including flights, transfers and a host (friendshiptravel.com).

THE GOLDEN RULES FOR SOLO TRAVELLERS

Take a trip back in time to a hotel stuck in 1930s – with no phone signal
Recent Posts
This website uses cookies to improve your user experience and to provide you with advertisements that are relevant to your interests. By continuing to browse the site you are agreeing to our use of cookies.Ok